How do YOU say “potatoes” in Russian? 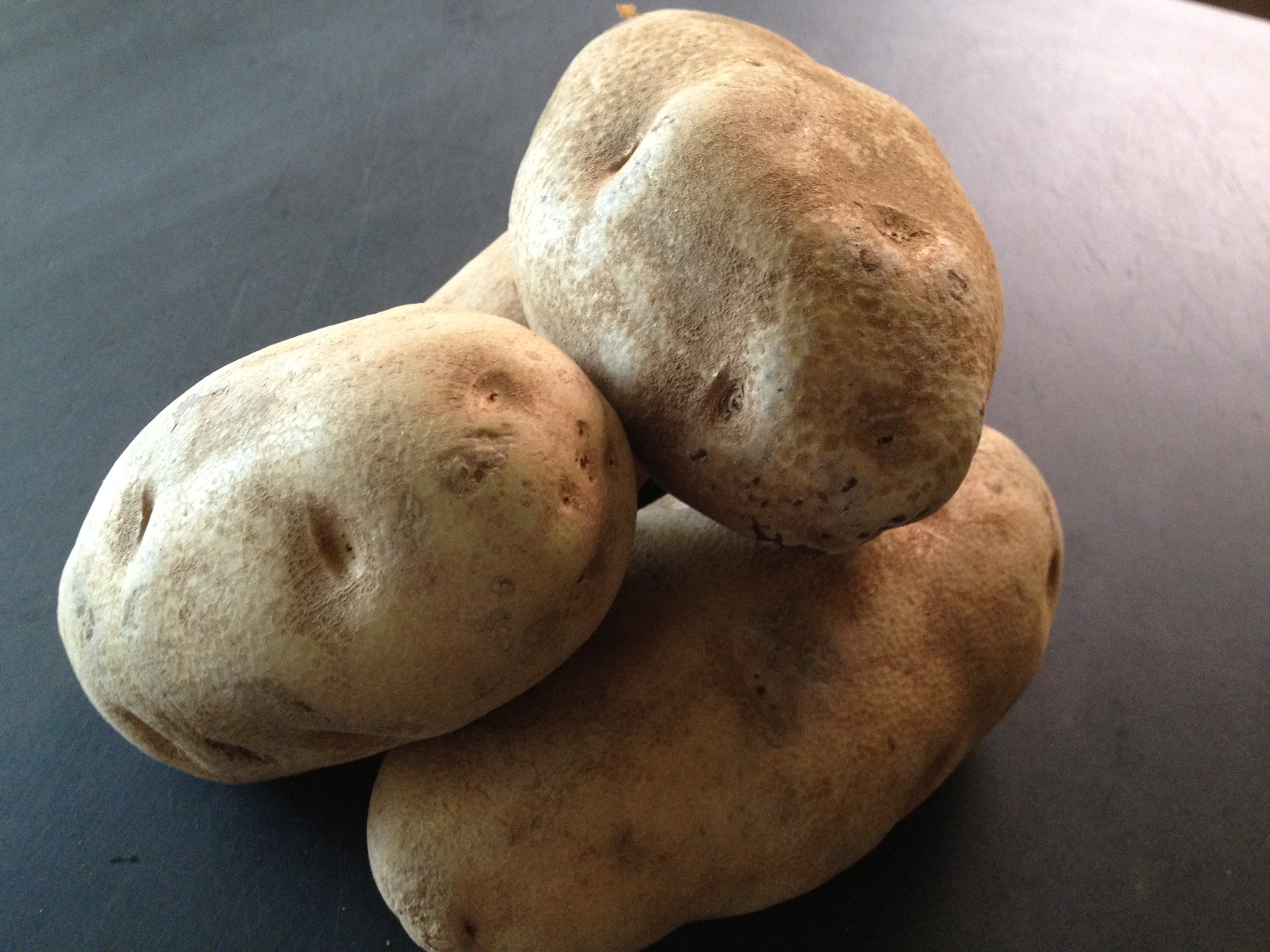 I made a reply to a post last night, but after I posted it, I wondered how many would ever actually stumble upon that thread. For starters, most of the comments on it were made more than a year ago. And since I’ve seen questions and posts related to “potatoes” sprinkled throughout the Russian Duolingo lessons and know that I don’t personally always look at every discussion thread that comes my way during a Duolingo lesson (and others probably don’t either), I thought I’d move my reply to a discussion post. So, here it is. It began as a reply to Theron126 in the thread:

Do we have potatoes?

This was my reply:

I appreciate the edit to your post, but I am curious about something. You wrote:

"Картошка" is generally used as a mass noun, so the singular form is correct here.

Having made my acquaintance with collective/uncountable/mass nouns in the past, it seemed like a reasonable explanation. I was going to ask you how you came to find out that «картошка» was generally used as a mass noun when I decided to do some research of my own. I ran «есть + картошка/картошки/картофель» through Google's Ngram and through just a general search of Google web pages, filtering for Russian pages. First, the findings from the Ngram: 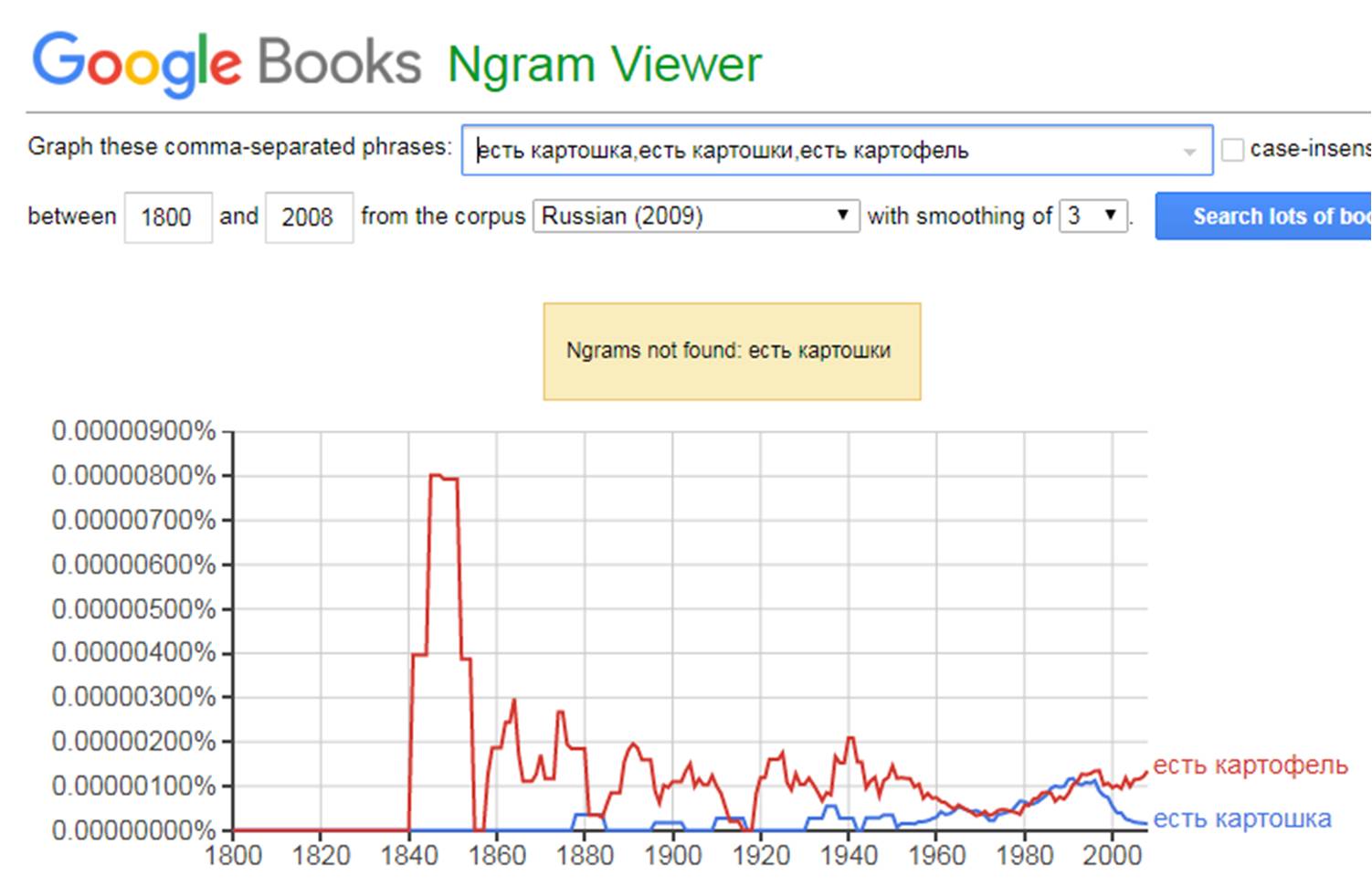 As you can see, «картошки» doesn't come up at all, but «картофель» is more common than «картошка» (although «картошка» was giving it a run for its money in the 70s and 80s). 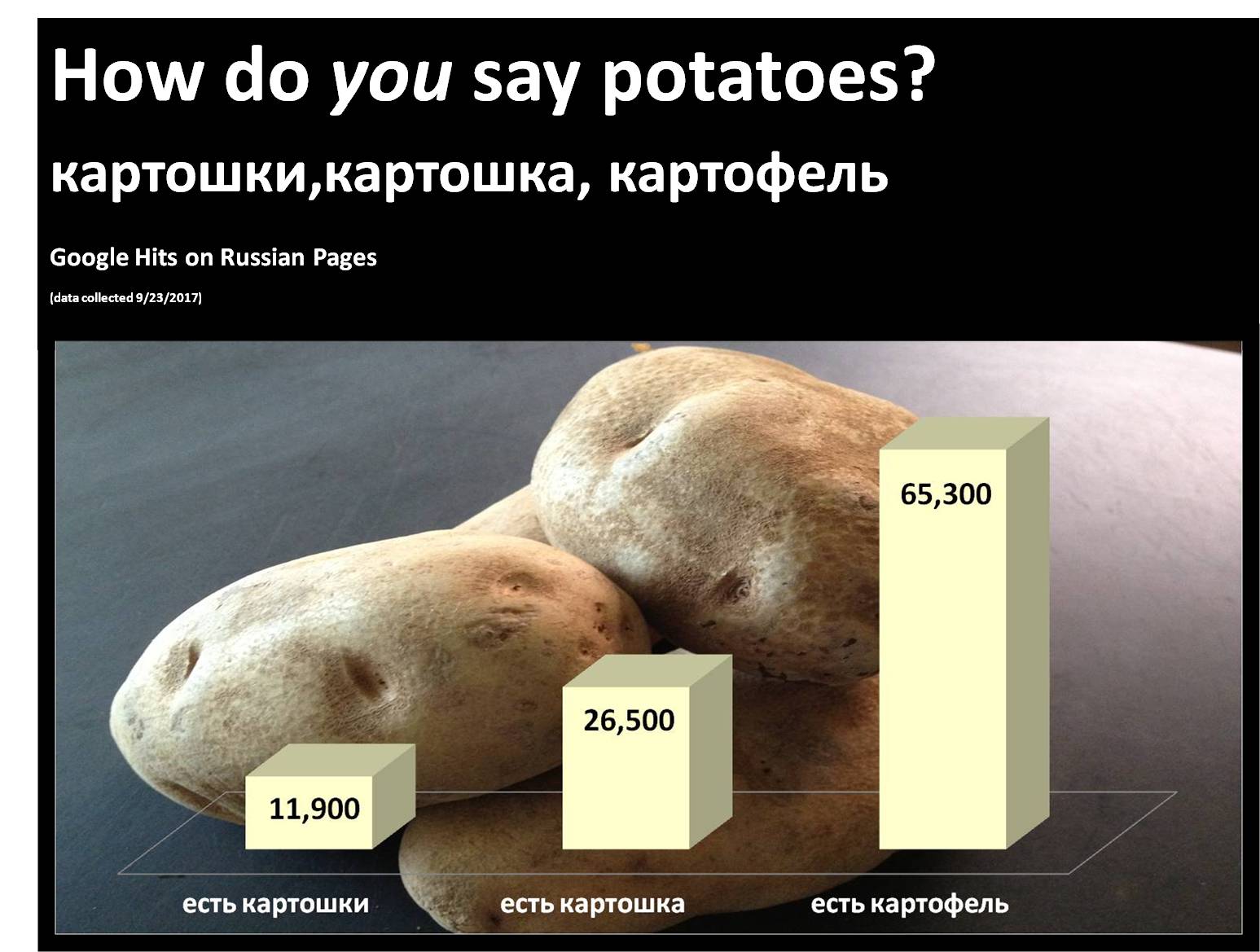 Initially, I thought that short of inspecting each page, I had little way of knowing whether each instance of «картошка» truly refers to «potatoes» thinking that the possibility existed that some of these pages on which it is found could be referring to a single potato. But if you keep reading, you’ll see that this initial thinking was not correct. Nevertheless, this ambiguity does not exist with «картофель» since it is considered an uncountable noun, and, therefore, I am assuming that it is always translated as, and referring to, «potatoes» as a collective whole. In fact, I ran across something that further elaborates on this and pertains to what I alluded to earlier. Duolingo user (nikanokoi) posted this in a discussion thread:

If you need to describe a single potato, you use the word картофелина (comes from картофель)

For pronunciation and other details, click on the link below:

Nikanokoi, whose bio tells you that she’s Russian, mentions that the word «картошка» never means just a single potato and that it is always used in a collective sense. So, if you’re going to use the word «картошка», remember that it means “potatoes.” Some examples that demonstrate this:

Вот картошка.
Here are the potatoes.
(Here, «картошка» is in the nominative singular, but it is translated into English as a plural.)

Вот масло для картошки.
Here is butter for the potatoes.
(The preposition «для» requires genitive case and «картошки» is genitive for «картошка».)

One final note. I just reread the lesson notes where you’ll find the following:

The formal word for potato is карто́фель (German speakers, rejoice), but it's hardly ever used in speech. Use «карто́шка» instead.

So, if you’re writing a paper for school, I guess you’ll want to use «картофель»; otherwise, use «картошка» instead.

Hope those who read this find it useful and/or interesting.

Your description of my post as a "scientific essay" made me smile. Thank you for the compliment and for the additional information.

BTW, I just finished translating the Russian you included in your post. When I first glanced at the word «президенту», I thought Oh no, I hope this is not another political statement, but I found all of your examples quite neutral, delightful, and charming. Срасибо.

To answer your question how I found out that картошка is a mass noun, a native speaker told me, then I confirmed by experience. Having spent time in Russia talking about potatoes in the real world, I can confirm that the lesson notes are accurate. I was coming here to write the same thing :-)

Thank you for the explanation. I love learning about how people come to their conclusions about things. Some people get testy when you ask them how they've reached their conclusions, but I'm glad to see that you didn't interpret it as an affront to your knowledge.

I don't want to go too off topic here, but how interesting that you spent time in Russia. For how long and for what reason? Where in Russia did you visit? And what kind of conversation did you have about potatoes? Were you planning to prepare some sort of dish with them? If so, how did it turn out? (And thanks for the testimonial on the lesson notes, too!)

I've been to Kazan twice, for two weeks each time. The next trip is planned for the middle of winter and will last a month. I'm spying out the land because I intend to move there. This last trip had the added bonus that a couple of my friends were getting married, so I got to see the weddings and help with preparations, which was one place I encountered enormous quantities of potatoes. I ate quite a lot of potatoes, mashed or boiled, with the family I was staying with. Between one thing and another, I heard "картошка" quite a lot.

I'm always grateful to anyone who wants to share their knowledge with me and the rest of the community here at Duolingo. Спасибо for your contribution, pantori.

BTW, I really like the avatar you have chosen. Is there a particular reason you chose it?

Books would naturally use official terms unless they aim for a more informal style or imitate spoken dialogue (i.e. in fiction).

BTW, "есть картошка" usually (in correct Russian: always) means "there are some potatoes", not "to eat potatoes". It sometimes applies to "есть картофель" (its nominative case is the same as its accusative case).

In addition, the scientific name of potato is Паслён клубнено́сный.

Yes, but only scientists and you know this name. If I knew it I would newer eat it.

))) You are right. Very often Пасленовые are poisonful. And potato is not an exception. It has green fruits and it contains poison. 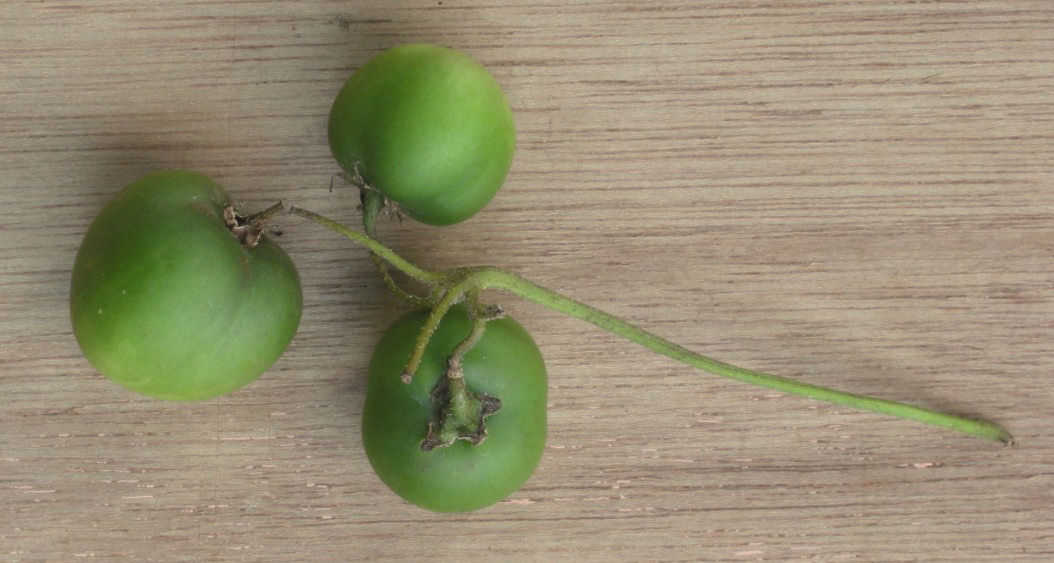 Looks like tomatoes. That's right, tomatoes are also Пасленовые. And it also has poison. So, don't eat green tomatoes.)

PS. translation of Пасленовые is the Solanaceae, or nightshades.

But some of them are OK to eat. I ate https://ru.wikipedia.org/wiki/Паслён_чёрный ("Solanum nigrum (European black nightshade)") when I was a child (now I don't see it around).

Yes. Potato and tomato are OK to eat too, but it depends what and when to eat.

They all have the соланин poison.

Solanine levels in S. nigrum can be toxic. Children have died from poisoning after eating unripe berries.[8] However, the plant is rarely fatal,[9] with ripe berries causing symptoms of mild abdominal pains, vomiting, and diarrhea.

Wow! How do you know all that!? Now, before eating something I will ask you.

There is no something special. It's just from Wiki.

But I prefer potato from Belarus, not from Wiki. Theirs is the best.

I eat potato from everywhere. I hadn't known that Бульба is potato in Belorussian. Taras Potato ;)

Growing up speaking Russian my entire life, with my Russian-speaking family and friends, I never heard or continue to hear the word "картофель" ever. It's just not used. Картошка is the common usage, and the plural nominative "картошки" are just as rare.

Of course, Картошка is used more in speaking but in official texts you don't find it.

Have you ever heard about "второй хлеб"? Literally, the second bread.