I think they're only testing it, but I think it's pretty nice. You can see your progress, streaks, and lingots all at the top. Also, the language flag is in a pretty snazzy (sorry) aesthetically pleasing circle. Can you access it too? Thoughts?

Can you post a screenshot? I updated the app, but the only change I note is lack of audio in Japanese and Korean match-the-tiles exercises (which I don't like at all, but is probably a good thing!) 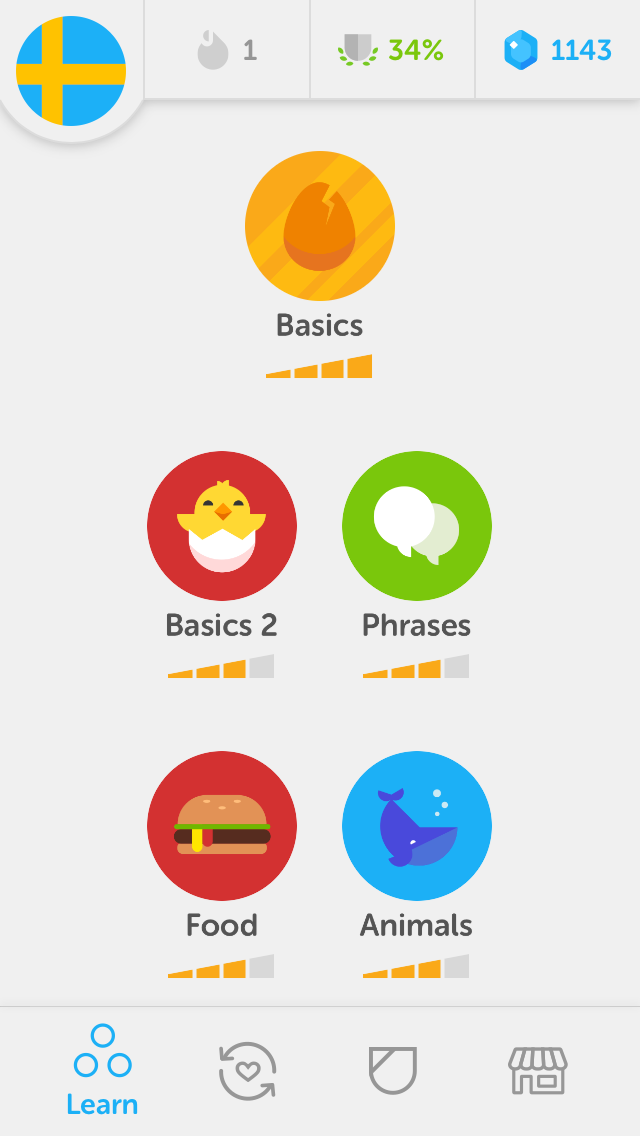 I assure you Swedish practice isn't usually that bad I just haven't thought about Swedish for a while, which leads me to something else. It only works on like 3 languages ??? I hope they make this an official layout, though.

I don't have my app looking like this; thank God. The last thing I want on my account is health.

Thanks! My Swedish tree on the app certainly doesn't look like that, so it must be an A/B-test. Are those lingots or gems, and where has the 'Practice' button gone?

Oh I didn't realize yours hasn't updated to the weird lingots and practice thing. That happened a long time ago I just guess that hasn't rolled out yet for everyone. I don't know if you got the "hearts" update, but it lowkey kind of sucks lmao. If I remember correctly the practice button is in the heart regeneration area. Also I have no idea what happened to the lingots. I have 180 red lingots and that translates to 1143 blue ones I guess.

Ah, no; I am apparently stuck in a delectable time-warp. Long may it continue!

I've had this design for a while and for me every language is like this except for the beta ones (Hungarian, Guarani, Japanese, Swahili, and Korean) and I also have the health/gems (the blue weird lingots) update but it could still be an A/B test to some people. The fluency meter appears for certain languages as it does on the website. There was a time where it was a completion meter which I thought was better than the fluency meter in my opinion. Also, I have experienced a possible glitch where I switch between layouts though and it may have something to do with the order I switch between languages. You still have the lingots but only on the desktop and Android versions and I believe the health update is currently being worked on in terms of making it better as some aren't pleased with it (myself included).

Ah, thanks! Yeah I had that same glitch where it would switch between layouts for beta graduated courses as well. I only started using Duolingo December of last year, so I have 0 recollection of the completion meter. Well I hope they'll make the health feature something that can actually help me, because to be honest applying it to learning new words is the worst idea in comparison to adding it to the practice portion.

It works for more than three languages (all languages I have on the website and android are available).

September 26, 2017
AboutDuolingo English TestMobileGearHelpGuidelinesJobsTermsPrivacy
Learn a language in just 5 minutes a day. For free.
Get startedLogin