Are there plans for exercises that require us to type in 한글?

There are exercises that require us to type in English, but not exercises that require us to type in Korean. I appreciate that not everyone has a 한글 keyboard installed on their phone, but they are available for free. It would help dramatically with actually learning the words. At the moment I find I just remember the general shape of the words, and not the exact spelling. Especially with no speaking exercises, I feel like I'm learning in a very non-transferable way.

Does anyone have any tips on writing and speaking exercises for Korean?

Paper and pen, my friend. Instead of picking the words from the list, you can write them on paper and compare the solutions.

Whilst paper and pen are an acceptable solution if I am at my desk, I usually do DuoLingo in places where I don't have the space to study more formally. It seems a rather arbitrary decision to not make it an option. Is there a logic as to why it's not supported?

All three of the above Duolingo courses don't have any Korean/Japanese typing questions at all on the Android app (and, I assume, iOS app too).

However, all three do have Korean/Japanese typing questions on web (desktop and mobile). ^^

I haven't tried the Korean→English course on the app or on web yet, but I assume it's the same situation as those three above?

I was under the impression that neither English→Korean nor English → Japanese was available on the web, certainly when I try to access them on the web I get a message telling me that they are not. Is there some indirect / alternative method of access?

Horako224 posted those instructions here in the forums all the way back in mid-April. I created this "testmoogle" account shortly after that was posted and now have a 164-day streak doing the English→Japanese course entirely on web. I haven't earned even a single EXP in the app on this account. ^^

I've done Korean->English, you can do typing exercises on the website.

That's as I expected then. I would be very surprised if there are any courses on web not having typing exercises for both source and target language.

What I'm far less certain about is my assumption that Korean→English doesn't have Korean typing in the app. It's crazy enough that the Japanese→English course doesn't have Japanese typing in the app even though it's designed to be used by Japanese people. But there should be even less of a reason for the Korean→English to not have Korean typing (unless the course uses 한자, I guess...)

Have you tried the Korean→English course on either of the apps? And does it have Korean typing?

On the app, no there is no typing. And to address your other thought, no the Korean to English course has no 한자.

Thanks! I also got curious about whether you meant the app doesn't even have English typing for Ko→En course. So I reinstalled the app on my phone today and tested all four courses myself (along with Chinese→English too).

Typing exercises in the app:

I think it's very strange that the courses designed for Korean, Japanese and Chinese people don't allow typing in their own languages!

I also tried the En→Russian and En→Hebrew courses in the app. Both of those do have typing in those non-Latin scripts in the app...

Particularly for Korean with its really simple script, I really can't fathom why there is no typing in 한글 in the app. ^^;

*** update 2017-10-14 ***
Okay. Ko→En actually does have Korean typing in the app after all, but just not for every sentence. (Thanks to MissCamden's comment below for correcting me about this.)

are you talking about the iOS app? because i use android and i definitely have to type in 한글 for the english from korean course.

@MissCamden - (pt.2) Okay. You are right. It looks like I really didn't use it long enough when I tested it. I encountered typing in 한글 as early as the second lesson↓ 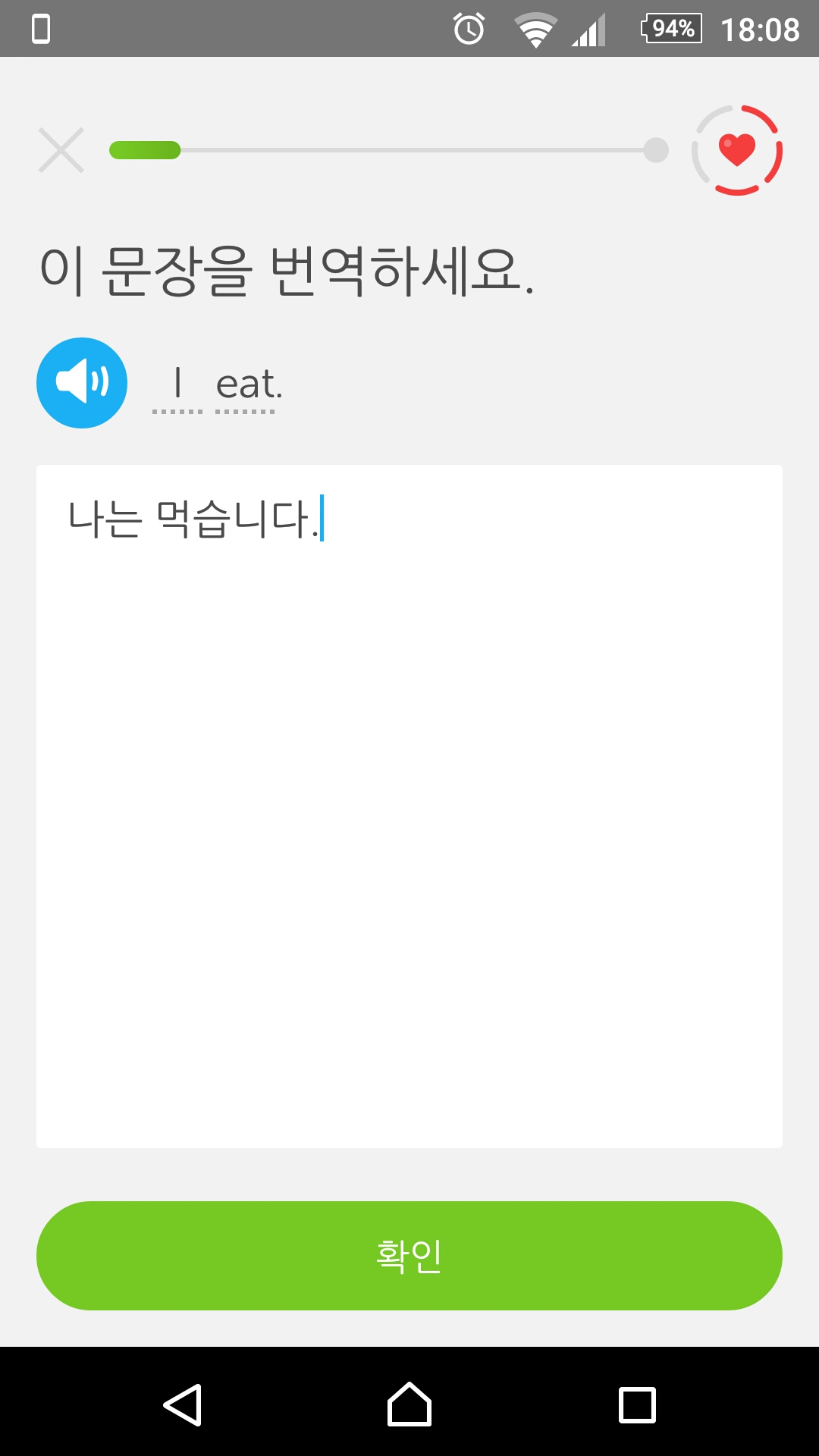 However, the first lesson asked me to make the Korean sentence using tiles↓ 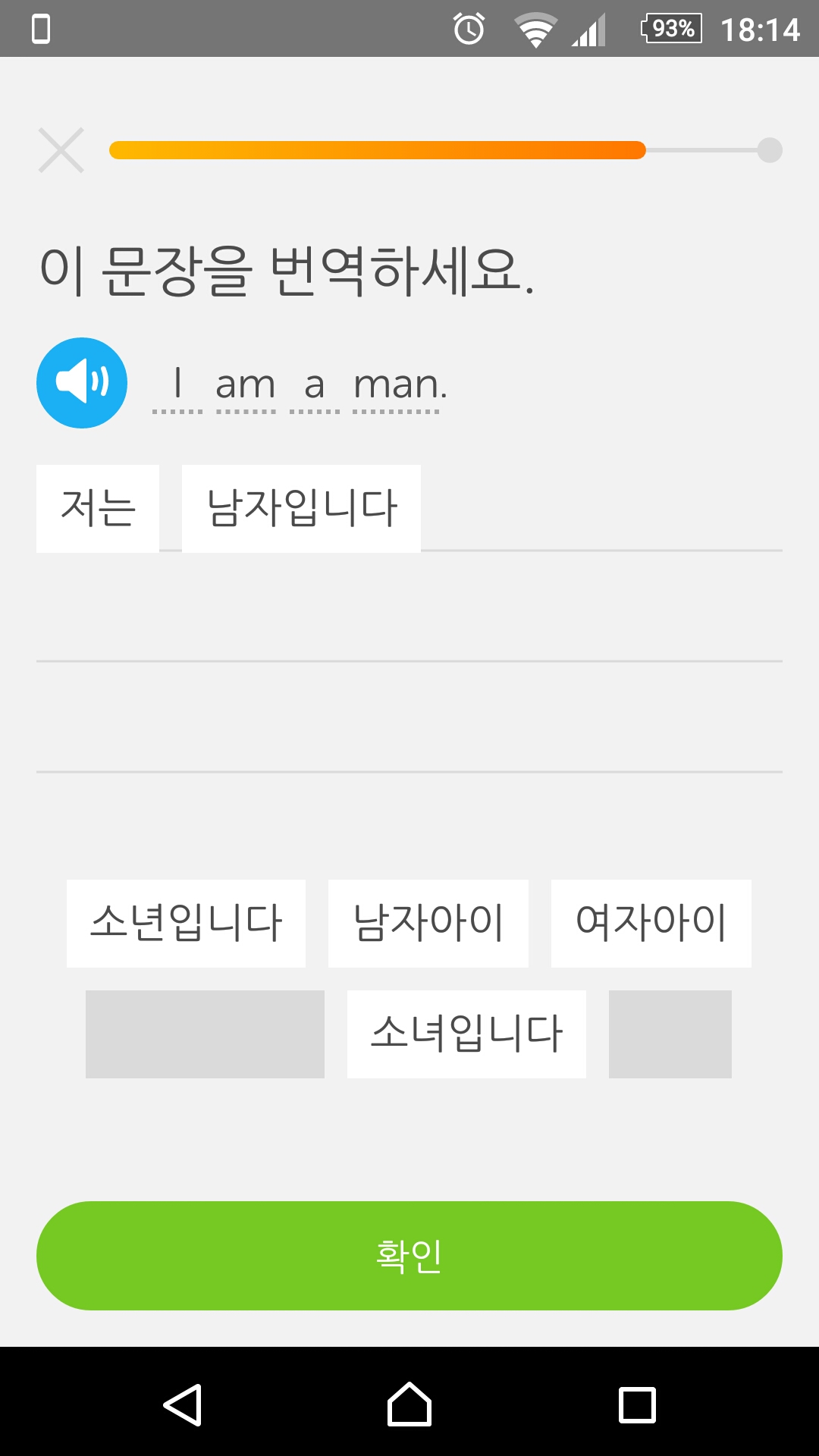 These courses are not available on the web right now. There's also no date set as to when they're going to release them for the web. How are you able to access them using the web?

are you talking about the iOS app?

I'm definitely not talking about the iOS app. I don't own any Apple devices to even use it.

because i use android and i definitely have to type in 한글 for the english from korean course.

I don't normally ever use the app on my Android phone, but for this I did at least one or two lessons in each of those courses to test it, and I wasn't presented with any typing in 한글 for Ko→En course on Android.

It's quite possible that I simply was unlucky and might have eventually encountered an exercise requiring 한글 typing if I'd tested the course a bit longer. However, I'm fairly certain I remember seeing sentences where I had to tap word tiles to make a Korean sentence on that course.

Personally I rather hope that the Word Bank style isn't planned on becoming the new way of answering translation questions. I found when using it for Korean it's really hard for me to learn the language since I end up looking at the general shape of the word and not reading the whole thing. With other languages though I haven't found this same problem since I know at some point DL is going to ask me to spell the word in a translation question so I'll have to know the spelling in advance to get the question right without hints. Perhaps this is just me and my brain is just lazy or something, I don't know. I did also agree with OP's point where they say, "I feel like I'm learning in a very non-transferable way".

Another thought is that since I'm not having to sound out words to remember the spelling when typing it's been really hard to remember any words by their sound compared to other languages I've tried. If DL wants to add the word-bank to the web version as an option along side the regular typing exercises I suppose I'm fine with that. Personally however I think removing typing exercises altogether could be detrimental to people learning the language because of the somewhat obvious issue that you get little to no practice in spelling words, unless of course you take more time out of your day to do separate spelling practices alongside DL lessons.

I can see that perhaps for courses where the language's script differs from the learner's own language (English-Greek or Japanese-English for example) some people might find it more simple to start out the course with word-bank questions and indeed, for the English-Korean course I found the word-bank questions really useful for learning the alphabet. Beyond that however I have found them more difficult to learn with and also more difficult to use as I have to keep swapping my hand from keyboard to mouse and back again between questions (call me nit-picky about that last one if you want, haha). Finally I would just like to clarify that I'm not saying other people might learn better with the word-bank style or find it easier, just that I myself do not.

tl;dr I feel typing based translation questions are generally more helpful than their word-bank equivalents (at least for me).

This was just my two cents for anyone that cares and in case anyone from DL happens to read this. If you managed to make it all the way through I appreciate you taking the time. 고맙습니다. ^_^

I've been using the app for 2 weeks and there are no korean lessons where I actually have to type in Korean. Is there a way to activate it or something? Or is it only available in some lessons?

I don't think anyone has target language typing in either the Android or iOS app for any of the following courses: English→Korean, English→Japanese, or English→Chinese.

Target language typing in these courses is only available on web. I haven't heard any talk of the situation changing for the apps.

Even for people doing these courses on web, there's still only around a 50/50 chance whether your account has been given the opportunity to use target language typing or not. They're currently running an A/B test deciding who gets to use have it and who doesn't.

On web, with my three accounts with the Korean course, my "testmoogle" account has a toggle button for switching between using keyboard or word tiles for any sentence I have to translate into Korean, but my other two accounts have only the word tiles with no toggle button. ^^;

Alright. Thanks for answering my question. I was confused with the screenshot in this thread that's why I asked. I really thought it was the app it was referring to. :-) I hope Duolingo can update the app so we can start typing hangul as well.

I have been doing the reverse course (English for Korean speakers) which allows you typing in 한글 both on the Android App as well as on the web for quite a while before the new Korean for English speaker course came out. I started the new Korean for English speaker Duolingo course but out of frustration that I have to type the English answers (where a choice of word blocks would be fine, as I do not have to practice my English typing and spelling), I am contemplating going back to the reverse course to keep up practicing my typing in 한글. I also have the impression that this really helps me in my 한글 reading speed and proficiency.