What is the difference between ''granjero'' and ''campesino''? Thanks in advance.

Being a "granjero" means that farmer is your profession. Being a "campesino" just means that you live in the countryside

Many thanks for your great explanation:-) Muchas Gracias

I think that peasant is archaic in English. Campesino and peón should be read as farmworker.

Yes. We don't have "peasants" in the true sense anymore and the word has negative connotations now.

Actually, we do, but we don't like to admit it.

Does "campesino" have the same negative connotation as "peasant"?

Yes the word "farmworker" should be accepted!

Agree re "campesino" (in many Spanish classes it has been assigned the meaning of "farmer") but "peón" is related to "pawn" in chess, i.e., lowest on the food chain--so it isn't likely that the latter word can be rehabilitated.

I totally agree! In modern day usage the term is also derogatory (in UK English) and I always feel uncomfortable using it. However, I do use it in DL to be marked correct!

It seems somewhat disrespectful to farmers.

It really is time DL dropped the word ''peasant''. Are they teaching Spanish speakers that the English word to use is ''peasant''? They could end up being sued by people with broken noses.

In California, campesino is a farm worker.

that's me, the tired peasant

Im an English speaker and (at least where i live) "peasant" is an offensive word, that is never used! I understand that the direct translation of "campesino" is "peasant" but I'm curious how offensive or frequently used it actually is in Spanish??

There is one exception that proves the rule vis-à-vis offensiveness. During the Spanish Civil War of 1936-39, Valentín González González was a colonel on the republican side and a rojo in every sense of the word. He provided a lot of material for Stalin's noise machine under his nom de guerre "El campesino." His choice was regarded as a gesture of defiance against the fascists, rich churchmen, large landowners and capitalists who allegedly despised and disregarded him because of his lowly origins. Ironically, his family weren't peasants, but miners. 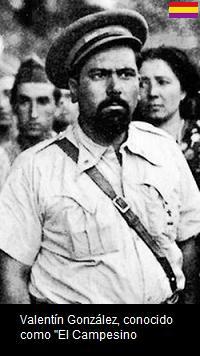 Can't campesono mean country folk? I live on a farmstead and would rather refer to myself or my neighbor as farmboy or farmgirl.

What about "a tired villager"? Is that an acceptable translation?