Every Letter Is Silent, Sometimes (English)

English is maddening, and it's not sorry

English can be such an intractable heel, especially when it comes to its spelling: for every rule explaining how a letter is pronounced in a given situation it often seems like there is a herd of exceptions mooing about how the rule doesn't apply. Letters persist in words despite not playing any discernible role in the word's pronunciation. It's maddening for those of us who are peeved by such things. If you are such a person and are in a foul mood already, you might as well continue on. (Note that this list is not comprehensive. The situation is actually much worse.)

Come take a walk through the English alphabet in its current iteration. Explore words from each letter in which that letter is silent by clicking here for the full article. (Please note, this article mentions some profanity in its examples). Were there any letters you were surprised to find silenced? Personally, I'd forgotten that the D was silent in some words.

*I say "current iteration" because English used to have 6 more letters O.O

PS Here is an alphabet of bunnies. :) 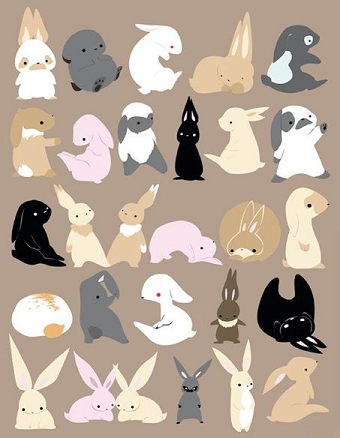 that bunny alphabet is the funniest and cutest thing i have sing all day!

Thanks! It took a surprising amount of time to find. Were there any letters in the alphabet you were surprised were silent? I was surprised by the letter D. I had forgotten about the words they used in their examples.

You sure do love bunnies!! And thanks for the information on English(even though it is my native language)

One of my main reasons for minoring in linguistics is stuff like this. I like knowing why these letters have become silent in their environments with some explanations coming from places I'd never expect. Perhaps my favorite example is "gh" in words like daughter and through, because it actually used to be pronounced like German "ch" (and could be represented by one of those 6 extra letters you mention); and the moment you do pronounce them with that sound, you actually end up with something close to the German cognates: Tochter, durch (there's also a reason why the vowel and /r/ switched places in the latter word for English).

There is a very good chance I will know Spanish grammar better then my native English when I'm done.

Spelling is also so much easier in Spanish the only thing you need to really remember is words with H.

I feel the same way about learning Spanish from English!

One cool thing I've picked up from learning bits of Portuguese, Italian, and French is that the Spanish silent H seems to indicate the dropping of a consonant sound, usually an F.

Take for example Hablar, which in Spanish means to speak. The word for speak in Portuguese is Falar, whereas in Italian it's Parlare and in French it's Parler. They all derive from the Latin Fabulor. Hacer (to do) in Spanish is Fazer in Portuguese, Fare in Italian, Faire in French.

Replacing H with F is a nice tip for Portuguese. Fluent Spanish is my goal the next two years but Portuguese is on the short list of what I might focus on next.

Also that's one heck of a streak real dedication there, well done.

The alphabet of bunnies made my day 10,000,000 times more awesome, thank Usagiboy!

Those bunnies are so cute! And, you say, all of them are silent at some point?

Nice post. I imagine this stuff can be pretty bad when speaking English. Its annoying, sometimes its hard to figure out these things >-<

We've got the same type of rules in french. Like for example, "ils finissent" you say it ils finis, leaving the "sent" out.