Stuck in the middle of nowhere, Spanish came to our rescue.

Every year around this time, my friend and I head out with our tents, since neither of us spend the week with our families. (Hence the streak is back to zero.)

Our first year (2015), unexpectedly landed us in 9F degree weather (click for picture of my frozen tent). The next year, we hardly saw a patch of sky through the rain and had to build a temporary rock bridge to ford an icy stream that had flooded our path along the Pacific Crest Trail.

This year, like the others, we headed out to the middle of nowhere to soak up the wilderness and let the cities rest. There wasn't a gas station for sixty miles to each side. The only store within that 120 mile stretch was a small one and aptly named "Oasis". Its sign read, "closed for both Thanksgiving and the day after". There was a hot spring several miles off and the weather this year was much improved. We had a bit of cold fog, a night where it rained at bed time and cleared by morning. From there forward it was sunshine, blue skies, and starry nights, with a snap of frost arriving Friday night. The only thing that could have made the location more perfect: if the season hadn't brought a handful of hunters and fishers to interrupt our solitude. We didn't know it, but we'd be thankful for them come our last day because there was no cell service for miles and we ended up in a pickle.

Saturday morning and my friend decided to charge their phone while we broke camp. All ready to go, we tucked ourselves into the car and my friend turned the key in ignition, to no effect. The battery was dead. Several hunters had left the night before. So, we weren't even sure if there was anyone left. This did not bode well for us. It wasn't just a matter of a dead battery, but the eventual necessity of finding somewhere to charge an insulin pump. We got out of the car and set out to see if there was anyone to find.

We were relieved to find some tents, until that was all we found. Where were the people? Had they already headed off to hunt for the day? We were getting anxious. Finally, I spotted a group of people up ahead. I didn't want to lose them. So, I hurried in their direction, waving and calling out, hoping they would see me. Finally, I reached a straggler from the group who had just gotten out of one of the outhouses. "Hello! Our car battery is dead. Do you happen to have some jumper cables?"

"No Inglés." Came the reply with a smile and a wave of hand as he turned to go. The rest of his group had already made its way off into the distance before I'd reached him.

"Está bien. Hablo un poco de español!" That's ok. I speak a little Spanish! I managed excitedly. The person, surprised, turned back to me. "La batería del coche está muerta. Me ayuda por favor?" The car's battery is dead. Will you please help me? (Ok, so actually my first attempt told him "The battery in the car I'm dead" But, I caught it and swiftly corrected the conjugation just after.) And that is how I met the fisher, Anjuel.

Anjuel walked back with me and looked under the hood, asking my friend questions. I translated back and forth between Spanish and English for the two of them. Anjuel's friends had backtracked and he waved them over. No one had jumper cables. So, as a team, we pushed the car up a hill. Anjuel got into the driver's seat and then, with everything we had, we pushed the car down the hill. At first, no luck. And then, just before the bottom the engine roared to life!

And that is how, stuck in the middle of nowhere, Spanish came to our rescue.

To those wondering, my Spanish wasn't perfect. There was a time I had to ask "Mas despacio, por favor" Speak more slowly, please." And that helped. Still, there were things I said that Anjuel didn't understand, and things Anjuel said that I didn't understand. But we were able to rely on context to fill in the important gaps. The most important thing however, was that in the path of necessity, I did my best to communicate and Anjuel was kind enough to a stranger to listen and help. :)

I've started keeping track of some of the bigger events in my life which required me to use Spanish (linked below). Yesterday certainly wasn't the biggest among them, but it still reinforced my recent goal to work through the Spanish for English speakers course once a year. So, on January, I'll start my journey through the ES for EN speakers tree again. ^_^

Previous events: (1) The importance of multi-lingual access, (2) Language community helps find blood transfusion for former Duolingo staffer, (3) Spanish in a Crisis, and now (4) Stuck in the middle of nowhere, Spanish came to our rescue.

PS Yes, I saw a bunny while we were out there. :D
It was already dark when it hopped across our path. So, it was hard to see. But, the lil guy looked a wee bit like This.

Your translation laugh reminds me of the time my family first went to France (my dad later got fluent), and after a great meal at a restaurant my dad said “je suis finis, l’addition s’il vous plait” or, “I am dead, the check please.”

hee hee hee xD Thank you for sharing that.

I'm familiar with the internet slang usage of "I'm dead/ded" used variably to mean, among other things, "I am overwhelmed by how awesome the thing is" and "That thing contains maximum hilarity" (In this instance, mirroring to its pre-net predecessor "yer killin' me".)

I'm guessing this was before the "I'm ded" phenomenon?

Long, long before. Thirty years ago...

What a great story! In Finnish, one ends up in a broth, not in a pickle. I would love to hear similar phrases in other languages, my fellow Duolingoers! Did you test that hot spring? Or were you afraid of “getting in hot water”? :)

And here is the obligatory bunny: 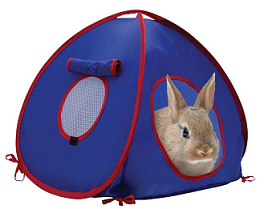 I totally tested the hot spring! I was a little grossed out, because there was a lot of wildlife dung around the spring. (Yes, including bunny droppings, but none were mine!!)

In a broth? Really? What is the Finnish word for broth?

(Also wow! That is a big bunny! Have a smaller version of that pic by chance?)

You should visit Iceland for the ultimate hot spring experience! :)

The word for broth is liemi. “Jouduin liemeen” means “I somehow ended up in a pickle/hot water.” “Olen liemessä” means “I am in trouble.” There is also the expression “monessa liemessä keitetty” (boiled in many a broth), which is used to refer to a person who has been hardened by experience (but has survived and may even be successful). I have tried to discover the origins of this strange broth obsession with very little success. [Edit: I have edited the images as requested just in case someone has a bad case of leporiphobia. I am yet to discover how to prevent giant rabbits from appearing in my comments. Sorry.]

(ok not so giant bunny i messed up the code) :P

Ha ha that’s great! It’s quite hard to speak Russian well, even though I can write it almost fluently!

In that case, a pen and paper would have been handy! There are actually quite a few Russian speakers in Oregon. If we had been closer to Portland, I wouldn't be surprised to have run into that language situation instead. Only, perhaps to less success, seeing as how I don't know any Russian yet. :(

Even worse sometimes we forget our native language. I have two native languages English and French but i'm surrounded by French people everywhere. I only hear English from my family. When i was in College, I was walking on the street and someone came up to me and spoke English. I was so surprise i guess, I reflex answered, Je ne parle pas anglais. After, when I told my mom, she said: NO MORE FRENCH FOR YOU after that she spoke mainly English to me. I'm still surrounded by French everywhere but i don't forget my English anymore.

Cool story! Even though we can't always speak a foreign language perfectly, what we know can help us in the most unexpected times. :)

Really cool story! Whereabouts did it happen? Was it in a Spanish speaking country or in the US?

I've never really had an experience of trying to communicate with someone who speaks zero English and speaks one of my target languages, in Australia. However, I did have a similar experience when I was volunteering in regional Thailand. The translator needed to be away from us for about half an hour. A couple people in the group needed to go to the bathroom. I saw them doing weird hand gestures and charades to ask a shop keeper where it was. I could tell that the person was really confused, so I went over to help. I was the only one in the group who learnt how to say "where is the bathroom?" in Thai. XD

Hi JessePaedia, that's awesome that you helped them. Needing a bathroom and not being able to get to one is the pitts.

That is a great story! Proof that learning languages can really help!

Even just a small amount of language learning!

I have a 25 badge in Spanish. However, my skills in it are not impressive. After getting that 25, I wandered off to other languages and other projects and let myself forget most of what I'd learned of Spanish. And yet, what little I remembered helped build a bridge across a language divide. :)