Translation:May is my favorite month.

Coming from the Polish course, it's cool that it's April in Polish that's kwiecień :)

Also, in many languages, listopad used to mean October https://en.wikipedia.org/wiki/Slavic_calendar And it seems that even languages as close as Bulgarian and Macedonian do not agree what treven means :)

Same in Ukrainian: квітень [kviten']= April, not May. A true false friend! 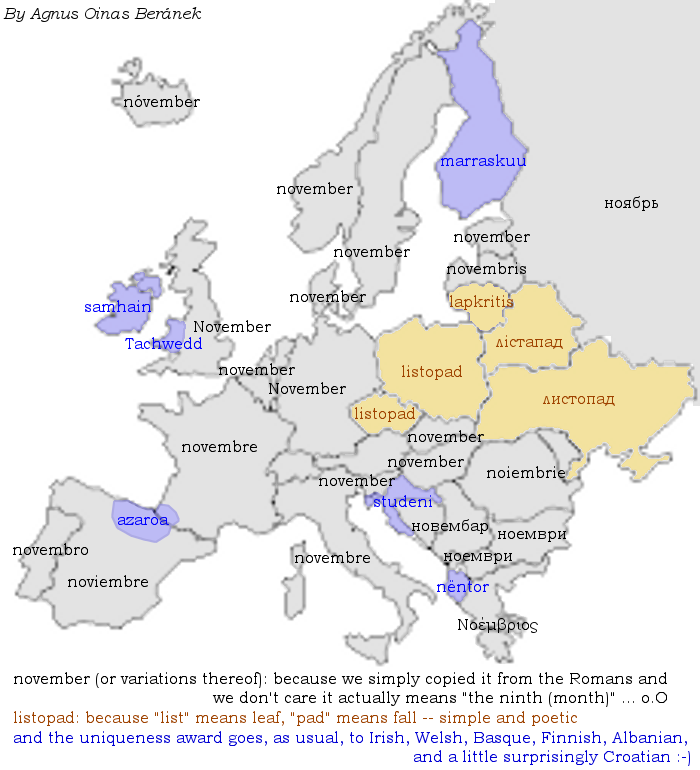 Samhain is my favourite, the Irish langauge of course had to preserve the pagan spirit. :D For Welsh, I have no words... :D Also, maybe you would also like to add the Breton Du, given that you also added the Euskara translation.

Oh god, "Du"! It never even occurred to me to look up Breton names of months when I was making that map.

My favorite is the Finnish "marraskuu" which means "death month" (there we have the halloween/samhain theme again). But the "marras" part is actually an ancient borrowing from Indo-European (cognate with French "mort" or Czech "smrt") and native Finns don't even know it means death.

Speaking of such minority languages, I maybe should also ask whether it would make sense to add the Gallego Novembro and the Catalan Novembre. Just asking, but in the end, we could also just step into every single minority language to be found in Europe, even though at least the latter is still present, alive and well, given that Carles Puigdemont usually tweets in Catalan, and that it may also still be taught in schools of Barcelona, inter alia.

Looks like they're related, both mean "black/dark". And it also means November in Breton aparently. How descriptive, reminds me of the Croatian "studeni".

And it's actually also "du" in Welsh. The soft mutation is "ddu".

Well I cannot really claim I know any Welsh, or its mutations. Just the omnipresent araf and words like ogof and words that appear in cave names like dwr, cwm or ffynnon.

Given that they are both Celtic languages, this is not all too surprising. I just think that Bretonic may be oblivious in comparison to the attention Irish, Welsh and Scottish Gaelic draw.

It seems as if not all Slavic languages copied some of the Roman names for months. I also saw that some call December exactly this, whereas others have created own names for the last month of the year, such as Polish, which calls it grudzien. :D

It's a bit odd to call them Western names. They are Roman (i.e. Latin) names and the Roman empire was both East and West. English was one of the languages that just adopted the Latin names even though they're confusing. For example, December means "the tenth month" in Latin.

You are right, and this was one of my more obvious failures in writing this comment, thanks for highlighting this. I will change it now, this cannot stand this way, given that Germany lies in the West as well (if we shall draw the line between today's Germany and Poland/Czechia/etc. As for December, yes, and also November (Ninth Month), October (Eighth month), September (Seventh Month).

I wouldn't say some languages created their own names, most of those non-Latin month names sound very similar in those Slavic language that didn't start using the Latin names. So just some common Slavic roots. Most of them have obvious etymology - for example, květen definitely comes from květ (flower).

Not just roots, the names - as the names of the months - themselves are Slavic. However, the same name may mean a different months in different Slavic languages.

As you surely know is the case for květen / kviten.

Maybe I shoudl have been more precise in what I meant to say; my bad, sorry. I of course meant that the Slavic languages' forbears created their own names, which have been incorporated by some, perhaps even the most, but not by all. some of the Southern Slavic languages seem to have incorporated at least some of the Latin names, such as December. (As I saw yesterday when reading through the news on the elections in Mostar, in BiH)

Some of the names in the Slavic languages seem to have been oriented around the harvesting seasons, such as in the Polish Sierpień, which can be translated to a sickle (Sierp). I do not know if the same translation also applies for the Czech Srpen. As for Květ /Kwieczien, this is obvious too, as you stated, although Poles and Czechs seem to be in discord about when flowers start to bloom. For the Czechs, it's in May, whereas it's in April for the Poles. :D

The names are really old - therefore common to a larger Slavic area. That does not mean they haven't been introduced or reintroduced to Czech quite recently .There was a large wave of borrowing from other languages in the 19th century to remove many borrowings, especially the non-Slavic ones.

And that is also one of the answers to your question. Obviously foreign words were actively being replaced by more native-sounding ones in that period. Máj is now purely poetic but used to be more common.

Květen was adopted from Polish and Ukrainian to avoid the foreign máj in the 19. century.

And yes, srp means the same in Czech, it is an extremely old word with pre-Balto-Slavic origins.

I'm proposing to accept favourite (with an u) too, because it is the british way to write this word!

British English is accepted automatically. If any of your answers was not accepted and it should be, you must use the official report feature.

I feel "favorite" should be "nejoblíbenější"? Doesn't "oblíbený" just mean "one I like"?