10 Problems Only a Language Learner Will Understand

The other day I saw this post and thought I'd share it. I'm sure we can all relate to at least one of these problems xD

Every single one of them. While I was reading them I was “yep. Yep. Yep that’s definitely me.”

How....have you done every language? And here I thought that 7 was a bit excessive (Fluent in Spanish/English, elementary Japanese, beginner Portuguese/Italian/French/German)

I love this! Thanks!

number 9 is literally me every single day in German class

German is pretty tough to be honest. I'm learning it in school (and started teaching my self extra) and yeah, 'tis hard.

I can relate especially well to No. 1. I mean, just look at my flags!

Oh my goodness!! This is awesome, thanks for sharing!

Yup I know all of these problems XD Especially the one about recalling words in my native language. That's probably my biggest problem. I actually have to make myself talk to people in English because I have immersed myself so deeply in French that I can go an entire day without seeing a word of English...it's a problem.

Yeah, that's one of the most common for me too. The mixing languages one is the worst for me though. Especially when I'm tired, I speak Franglais far more than English...

If I mix languages it's usually not with English, normally it's French and Romanian but occasionally one of the others decides to pop up as well.

I've mixed French and Polish too. Makes things exciting when the other person doesn't speak French! Though not as exciting as when I speak an interesting combination of all three, often with random words of other languages I'm not even learning thrown in. "Voudrais une glass of water, bitte." Who needs a pronoun? :D

Yuuup xD There was one time I was practicing my Japanese (on a different site) and it asked for women in Japanese which is onna but one of the options was dame (in Japanese this means bad, it's also pronounced differently) but I instantly forgot which language I was doing because in French dame is lady. It took me a good couple minutes to figure it out. So it's amazing how similar everything becomes when you're learning multiple languages even when you think they wouldn't be related AT ALL.

I've encountered all at least once except for No. 7. At all the others, I was thinking "Yep. Yep. Yep."

Also, when people call Indian a language, I have to resist the urge to punch them in the face. I was so mad at someone for doing that the other day, and they didn't even understand why, which, naturally, made me even angrier.

I feel this same urge when someone asks me "How many languages do you speak?" as a direct response to "I like linguistics."

Learn as many curse words as you possibly can in as many languages as possible and just curse them out.

I've been doing that for a bit, and it's fun. Plus you remember them by looking at them just once unlike regular vocabulary words which need 100+ repetitions to remember. 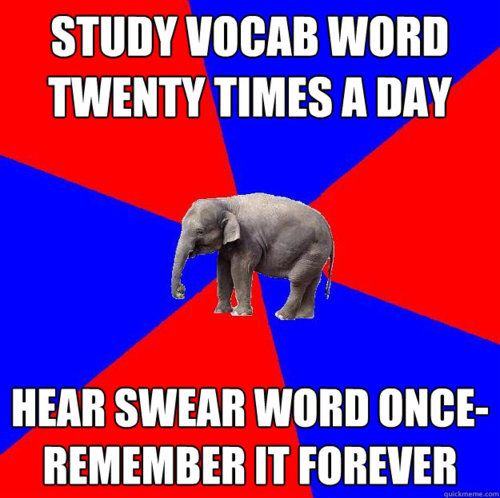 When you do encounter #7 it makes you feel like a badass ;)

Ah yes, stupidity at it's finest. In my book, I would have allowed you to punch them but it's probably for the better that you didn't.

I'd say that isn't entirely true, if your language is completely different from those spoken in the area. For example, I've been in areas where speaking Spanish is common, but "Oooh, you speak Polish? Say something!" because Polish isn't a commonly spoken language there. As for #5, you'd be a much better judge than I am, but would it really be that surprising if you were learning Albanian and were asked "Why are you learning Albanian? French would be much more useful!"

Were those areas primarily Spanish-speaking?

No, primarily English-speaking but with a large Hispanic minority. Obviously your point would hold for any unilingual area regardless of what the language is, so really, with the exception of #6 (that one is undeniably monolingual English-speaking-centric), the title should be "10 Problems Only a Language Lover in a Monolingual Or Exclusive-Bilingual Context Would Understand". ;)

Yeah, that's probably true. Although up to a point I imagine the exclusivity of the languages spoken in an area matters more than the number, eg. in an area where there are four common languages but nobody ever speaks anything other than those four, learning some random language would probably still be unusual. Would you agree with that?

After all, though, many of us on the general English forum are in unilingual or exclusive-bilingual areas, so it's still interesting to see how many of us can relate to these. And even more interesting to hear the perspective of those lucky enough to live in multilingual environments. Yes, I'm jealous. :)

PS: Did I just coin the term "exclusive-bilingualism" or did I learn it somewhere and it's been lurking in the back of my brain for who-knows-how-long?

Is the title really that serious? :)

2. When you encounter people having a conversation in a foreign language, you stalk them covertly until you can figure out what it is.

This one has an irritating variant: Covertly listening to a conversation in the hope that you will gather up enough courage to participate only to chicken out at the opportune moment. This has happened to me several times. The most depressing occasion took place when I was going home after seeing a play. Opposite me in the tube there was a couple who had been to see the same play discussing the performances in Swedish. I just sat there listening and had many opportunities to participate but never did. So embarrassing.

6. When someone uses the “everyone speaks English” argument.

This is particularly baffling when English is not the native language of the person making the comment.

I've only heard it from people whose native language isn't English. It's really weird to hear someone say that and remember how when you met them they didn't understand 'hi'

I've only ever come across 6 once. I've yet to come across 7 though and I can't wait for when I do xD

My father LOVES to use #6 to belittle me for learning languages that aren't useful in his eyes. But I just don't care what he thinks anymore so meh. #7 makes you feel like a badass xD

Already getting a lot of these. I am learning Spanish, but started Esperanto (because I wanted to!) and reluctantly have put that on hold as I was starting to confuse similar words. Already got my eye on Italian!

I can relate all of these, especially 1 and 10!

Number 9 is a killer - quoi que ce soit (what that this is) Huh?