能说？ not 会说？ Never heard 能 when talking abour knowing languages. Is there a difference?

I learned that 会is for skills you learn/practice. Whereas 能 is for literal, physical ability to do something. By those rules, I agree with you that languages should use 会。 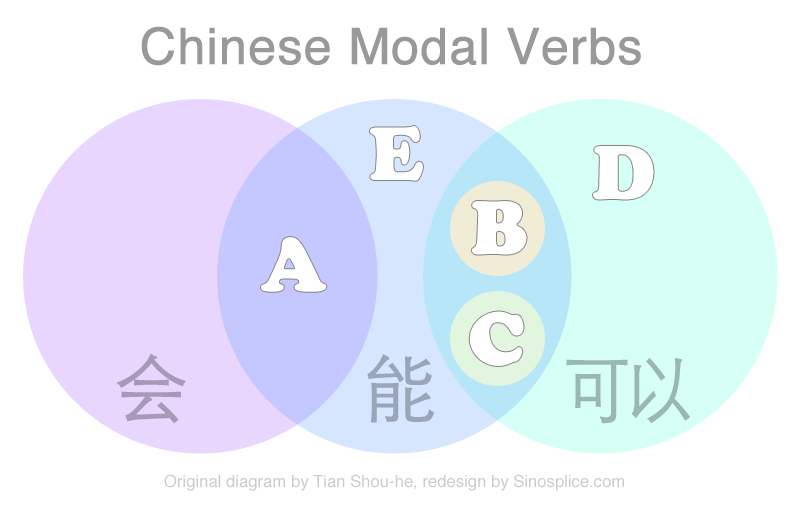 According to this website, 不能说 is correct for A and possibly E also.

thank you for sharing this. It is helpful.

Absolutely agree. From now I can not trust Duolingo in learning Chinese.

i could be wrong, but my understanding is that in this sentence, 能 would be saying you are not permitted to speak chinese, or that some circumstance prevented you, as the other commenter explained. so yes, 会 is the correct choice, as far as i know.

the character 能 means the ability to do something, much like the verb étre in French

Just want to point out that the french "être" does not imply ability. The verb "être" is the verb "to be" in english.

Absolutely agree. From now I can not trust Duolingo in learning Chinese.

"I can't speak Mandarin; it's good that my friends can" should be accepted.

Why do most of these not let me use "but" to combine the sentences? The comma seems to imply you should be able to.

That is an EXCELLENT point!

"But" would be ok for this sentence. Some of the other questions do not really work as one sentence in English.

This seems to go against the all the chinese translationd of "can" i know: for skills, 会 ought to be used, and 能 and 可以 are for capabilities and permitted actions respectively... please inform

How about "I cannot speak Chinese, so it is a good thing that my friend can."

In English..Luckily my friend can or Luckily my does. Mean the same thing.

Why is my answer "I am unable to speak.." wrong? Isn't "unable "interchangeable with " i can't" or i am not able?. Also, i have reported many times with the option that many of the words throughout the course have warped audio.

I can't speak Chinese. Luckily my friend can. S/HE SAYS IN CHINESE.

中文 can refer to Mandarin but it it typically refers to all of the major Chinese languages spoken by the Han Chinese peoples (the majority ethnic group in the PRC/Taiwan) often in written form. When referring to Mandarin itself you'll more typically see things like 普通话 (pǔtōnghuà).

So, the program was correct to reject your translation.

"I cannot speak Chinese, it's good that my friend can." should be accepted. In another exercise about a competition and rain "it's good that" is accepted...

Why use 可以 at the end, and not 会 or 能? Are they all interchangeable?

Not quite. According to the Chinese Grammar Wiki (https://resources.allsetlearning.com/chinese/grammar/Comparing_%22hui%22_%22neng%22_%22keyi%22):

"Sometimes they are explained as: 会 means "know how to," 能 means "to be able to," and 可以 means "to have permission to." Actually, they overlap somewhat."

It goes into further details but given what is mentioned in the article I would side with using 能 here.

I sort of feel like this is the difference between English's "Can I" vs "May I".

And yes, it's for sure quite strange to use one and then another in the second half of the sentence O_o As I commented above it sounds like "I can't speak Chinese [at the moment], good thing my friend is allowed to" :D

Wow. I already had questions when I went into this discussion. Now I have ten more! Firstly, according to every breakdown posted above, and also this video,(https://chinesepod.com/lessons/all-about-can-能-neng会-hui可以-keyǐ) where I first learned all this, "可以" doesn't make sense at the end of the Chinese sentence. I didn't even SEE the 会/能 divide at the beginning! Thanks, upstream posters! So our Chinese sentence translates more as "I'm not physically able to speak chinese right now, good thing my friend has permission".

ALSO! What's up with using "中文"? I know there are subtle differences, but I thought "文" referred more to spoken language. Should it not be "汉语"?

From how I was told:

話 means language in a spoken sense, not really including grammar.

文 means language with all it's "scholarly" attributes like grammar, spelling, punctuation etc. and maybe even poetry or calligraphy.

For example, if you tell someone you know 德文, it feels like you've studied German, had classes and exams and stuff. If you say you know some 德國話, it sounds like you've lived in Germany or visited and learned two words or maybe several sentences, or maybe you can actually speak but don't know how to write. Also, a video showing someone speak German would more likely be labeled "德國話" because we're showing speaking; and if it's like an online course or a Youtube teacher it would be 德語 or 德文. Language courses in the university are called "文". The article in Wikipedia about German language is called 德語.

(this is all "reporting" how it is in Taiwan)

Some language do not have a 文. For example, 台灣話 is always 話, it doesn't have a written language. Dialects are 話 - 廣東話, 四川話 (Cantonese is not really a dialect of Mandarin, but you know what I mean, local languages)

Thanks. That's kinda what I thought the distinction was. So if you say you can't speak 中文, you're kinda saying you haven't studied the language formally, whereas not speaking 汉语 is more about not being able to converse in an informal sense?

Well... I think the distinction is more clear when you say you CAN one of those things, but when you say you can't, it's like, if you can't one you can't another xD Dunno. I don't feel much difference between saying I don't speak 中文 or 汉语. Not a native speaker though :) (lived in Taiwan and learned Chinese for 6 years)

I can't speak Chinese, but fortunately my friend can.

You forgot "fortunately", "thankfully", "by a stroke of luck" etc..

The other hundreds of learners here will come up with a few dozen more I'm sure, to help us all improve our Chinese. ;-)

Can you use 幸亏 ? I've never seen anyone use 好在before Duolingo. Is that a region thing?

I am not allowed to speak Chinese. Good thing my friend can.

I would translate it more like "I'm not able to speak Chinese, good thing my friend is allowed to" :D