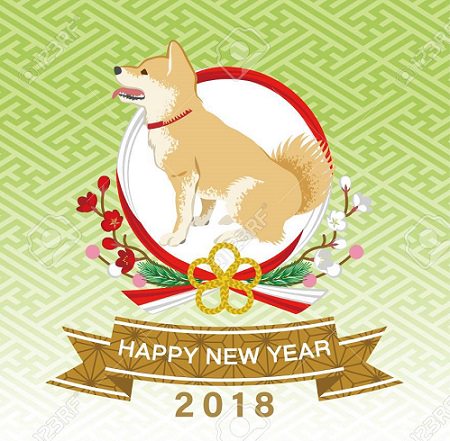 The 2018 is the year of a dog. Here's a little bit about the most popular customs, traditions and food for the Japanese New Year as well as seasonal greetings and wishes :)

Japanese New Year is very different from the Western culture's tradition. What they have in common is celebrating the beginning of the new coming year, but in Japan there are many more interesting customs and beliefs associated with it. Businesses are shut down and families gather up to celebrate the New Year, which is similar to how the Thanksgiving is celebrated in the US.

December is called Shiwasu (師走) - it means "teachers/masters run", implying that this month is very busy.

O-Shōgatsu (お正月) - New Year - is the most important holiday in Japan. The official celebration lasts from 31 December to 1st - 3rd January. The choice of those dates is in due to western influence, instead of the New Year based on Lunar Calendar and it's been this way since the 1873, five years after the Meiji Restoration when the Gregorian calendar was adopted by Japan.

Shōgatsu symbolizes leaving past year's troubles behind and getting a fresh start. Many of the customs have the purpose of bringing good fortune and expressing hopes for the next year.

In December, an End of the Year party called Bonenkai (忘年会) is celebrated, often with bosses and colleagues from work. It's spirit is to "forget the past year" and put it behind.

People often put up a kotatsu (こたつ -炬燵 - table and blanket over an electric heater), and at night they watch Kohaku Uta Gassen (紅白歌合戦), which is popular music contest on TV broadcasted by NHK (Japan Broadcasting Corporation). It is a singing contest between Red (women singers) and White (male singers). They also have Japan’s most popular singers, from young J-pop singers to Japanese ballade “enka” singers, performing live on stage.

On the evening of New Year's Eve, "year crossing buckwheat noodles" called toshikoshi soba (年越しそば - としこしそば) are eaten. They are easily cut which symbolizes letting go of the hardships; the length of noodles represents longetivity. Their meaning is wishing for a long life and getting rid of bad luck. Toshikoshi soba should be eaten before midnight, as it is considered a bad luck to have leftovers in the New Year. Common additional ingredients are tenpura (てんぷら - 天ぷら), spinach, tororo (とろろ - 薯蕷) - grated Japanese yam, kamaboko (かまぼこ - 蒲鉾) – fish cake, kakiage (かきあげ - 掻き揚げ) and a raw egg. When raw egg is served in a hot bowl of noodles, it is called tsukimi ( つきみ - 月見) – moon watching). The tradition of eating soba on New Year’s Eve started in the middle of the Edo Period (1603 – 1868).

The ancient Japanese believed that the Toshigami (としがみ - 年神) deities (or toshigami-sama 年神様 - year god) would visit your house during the Shōgatsu. In order to prepare the house and invite the good spirits, the nenmatsu no ōsōji (年末の大掃除 - ねんまつの おおそうじ) - yearend cleanup is done. As most of the Japanese New Year's customs, this is also a spiritual experience, attempting to get a clear emotional state by removing the dirt from the past year. Not only houses, but also other institutions, like schools and offices get cleaned, and if it's possible debts should be paid.

Okazari (お飾り - おかざり) - putting up New Year decorations. After the cleaning, the traditional decorations called kadomatsu (かどまつ - 門松) are put in pairs on the entrances. Kadomatsu decorations are made from three bamboo stalks cut in different lenghts and a pine placed between them; the pine symbolizes longevity, while the bamboo means prosperity; they are placed to invite the ancestral spirits and ensure a good harvest. They often have a daidai (だいだい - 橙) - Japanese bitter orange put on them. Because daidai (代々) can also mean generations, the sentiment of those oranges is to make the family "last for generations" . 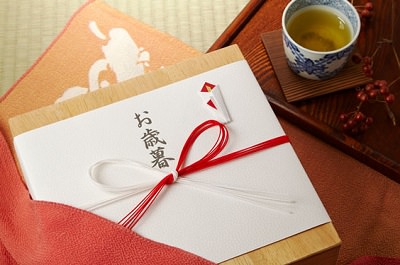 Oseibo (おせいぼ - お歳暮) - end-of-the-year gifts are sent to friends, teachers, important clients, colleagues and bosses; they are meant to express being thankful to people who showed you kindness during the year.

Popular ones are fresh food (seafood, meat, fruits), condiments, beer, tea, coffee, canned foods, desserts, gift certificates or house goods such as soap. The Winter Gift Giving season starts at 20th December, which is the day the gifts will ideally arrive to the receiver. They are often sent mid-month, but despite the timing, oseibo are not Christmas gifts.

NOTE: giving combs (read as “kushi”; “ku” means suffering and “shi” means death), scissors, clocks and knives (symbols of time running out) is a bad luck and should be avoided.

Another custom is how the gifts are packaged. Noshi (のし - 熨斗) is a thin and decorative piece of folded paper that is a sign of good fortune for the recipient. On each gift, the giver attaches noshi on which the kanji for oseibo and the sender's name are written. The prettier the Noshi the better the gift that comes with it and it helps to determine an ordinary present from an expensive one.

Omochi (餅)- rice cakes; the rice is boiled until soft and pounded with special wooden mallets until the rice kernels are broken down into a large white ball of rice that is doughy and sticky in texture. Years ago when many Japanese had farms and were able to make their own mochi, they would then take the large ball of dough and form it into smaller balls that were put into a special soup. Today instant versions of the rice are available for sale.

Mochitsuki (もちつき - 餅つき) - pounding the rice to make mochi, usually performed at the end of the year; traditionally, women used a mallet called kine (きね - 杵) while men turned and moistened the rice in the mortar - usu (うす - 臼).

A special New Year mochi - Kagami Mochi (かがみもち - 鏡餅, "mirror rice cake") is put up in various places of the house to welcome the toshigami. It is made of two of mochi: the smaller mochi is placed on top of the larger mochi, then a daidai orange and leaves and decorations are placed on top of it. 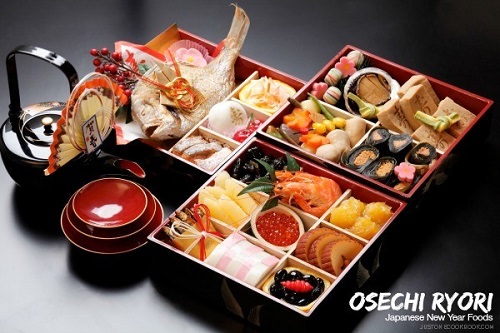 After midnight, no more cooking is to be done for three days as it will be a period to rest, or it will bring bad luck to the house. Because of this, families prepare osechi ryori (おせちりょうり - 御節料理), which is a collection of preserved foods in stackable boxes called ojubako (おじゅうばこ - お重箱) that are similar to bento boxes. Jubako can be bought already prepared from a local store. Traditionally food is packed in 2-4 tiered jubako (重箱) boxes. The arrangement of the food is very important, as well as the color balance, often representing seasonal shapes and motifs. Osechi dishes are typically stewed with lots of sugar, or they are vinegared to preserve them.

Osechi ryori custom is said to have begun in the Heian era (from 794). Each different food represents a different wish for what is to come in the New Year. There are many different variations of osechi and some foods considered lucky in one region may be very unlucky in another.

Joya no Kane (じょやのかね - 除夜の鐘) - the 108 chimes of temple bells (107 times before midnight and once past it) - a lot of Japanese people stay up till midnight to listen to the 108 bell temple's chimes which symbolize getting rid of Buddhism's 108 earthly human desires and puryfing for the next year.

Hatsuyume (はつゆめ - 初夢) - the first dream of the New Year, symbolizes predicted events and fortune of the coming year; some people put a special picture that shows seven gods in a treasure boat under their pillow in hope to get good dreams;

Hatsuhinode (はつひので - 初日の出) - the first sunrise of the year, it is considered a good luck to see one and many people go to special locations to do so (mountain top, the Pacific coast, and other places with beautiful view), praying for the good luck and health for the next year while looking at the rising sun.

Hatsumōde (はつもうで - 初詣) - the first visit in the new year to a shinto shrine or temple; it usually takes place between January 1st and 3rd; some people (usually women) wear the kimono (きもの -着物) for the occasion. The purpose of it is wishing for good luck for them and their families for the coming year ;

After making an offering, people choose omikuji (おみくじ -御神籤) - a fortune, which is slip of paper that tells the luck for the new year. Daikichi means an excellent luck, but if you pick bad luck, you are supposed to tie it to a tree or a wall of metal wires on the shrine grounds. Visitors can buy a good luck charm Omamori (まもおり - お守り) at the temple, as a protection from illness, accidents and disasters. Popular places to celebrate hatsumōde are the Meiji Shrine (Meiji-Jingū - 明治神宮) in Tokyo and the Okera festival in Kyoto. People often drink amazake (あまざけ - 甘酒) - sweet sake - to warm up.

Nengajo (ねんがじょう - 年賀状) - greeting cards similar to western Christmas cards sent to family, friends and coworkers, posted before the new year so that it will arrive on the 1st January; they usually contain Chinese zodiac sign of the curret year (represened by an animal) ; Although sending Nengajo is an annual custom, people not send Nengajo if one has had someone passed away in someone's family during the year. In this case, they would send out a postcard called mochu hagaki (もちゅうけつれい - 喪中葉書 - mourning postcards) to inform friends and relatives that they would not send out Nengajo, out of respect for the deceased. 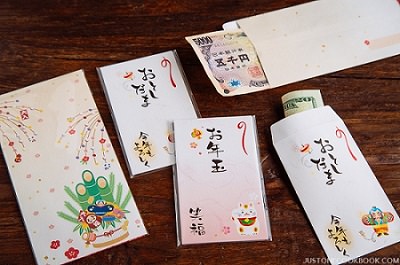 Otoshidama (おとしだま - お年玉) - children receive a money gift from their elders and relatives, contained in a small decorated envelope; the origin of otoshidama is a Shinto event in which kannushi (神主) - Shinto priests - give kagami mochi to shrine visitors.

Sanganichi (さんがにち - 三が日) - the first three days of a new year, when all the family members should be home for holiday

Kakizome (かきぞめ - 書き初め) - on the 2nd day of the New Year, some people, which includes children whose winter homework is to write kakizome, write the first calligraphy; words like dream, hope, peace and other good fortune phrases are often written.

Shigoto hajime (しごとはじめ - 仕事始め) - first working day of the new year, usually around the 4th day; you should say the New Year greetings to your colleagues, business partners and customers when you see them for the first time in the year.

Dondo yaki (どんどやき - どんど焼き) - on the 15th day, the end of New Year's season, all the decorations are burned.

Before the New Year:

After the New Year:

Seasonal words for "Happy New Year”, written on New Year's cards and decorations but not used in conversation:

Happy New Year, みんなさん！ I wish you all an amazing New Year, filled with many new languages and opportunities to practice them! :)

I just bought some mochi earlier today at my local Japanese fishmonger, to ring in the new year.

This is really cool! It couldn't have been easy to put this all together, so thank you for doing so! :)

Wow, that's a great article! But you forgot the most common phrases parents hear on New Year's Day:  おこづかいちょうだい！followed by これだけ？ ^..^

So, if Google Translate and imiwa? are steering me correctly, it's something like "Pocket money please!", followed by the little ingrates' complaint about the amount?!

This cracked me up! (≧◡≦) Thanks! And the parents might say (a sentence from the course)... お金をとらないでください!

You just told everyone to die happy. LOL

did you mean to say Arigato