Swahili yes and no

I finished the Swahili tree a couple of months ago and since then I've been practicing (on the duolingo app) everyday.

I recently realized that I never learned how to say "yes" or "no" in Swahili! It seems like those words should be in there. 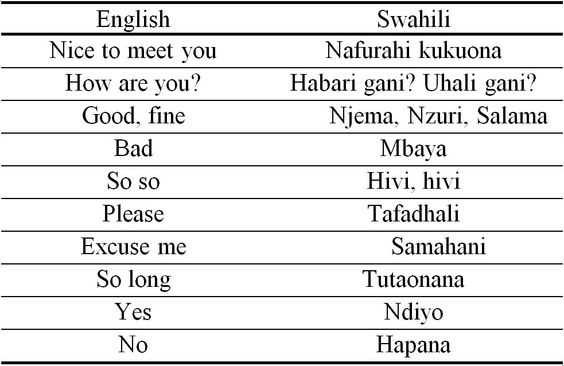 I hadn't realized that, although I'm only on the early part of the tree. Seems like something that definitely needs to be addressed!

the form for yes is spoken I guess just "dio" (correct me otherwise), while "hapana" for "no" is spoken like "habana", and "la" is the shorter arabic from, which is also used.

Is it not ndiyo with the d prenasalised?

Yes, the "N" is pronounced as a prenasalized consonant-meaning that it isn't pronounced as a separate letter (like Nchi) but rather it changes the pronounciation of "d". It's a very subtle distinction. I've never heard hapana being pronounced habana... I think the confusion is because P in English is aspirated, while in Swahili it isn't-For example, in Pinyin (Chinese written in lattin letters) Unaspirated P is written as B.

Exactly! Also, naam can only be used by males.

I find this hilarious because I have spent a lot of time learning, still not knowing yes and no. LOL