The influences of variety of languages in Esperanto.

I don't really learn Esperanto much, but I have found something that I want to share, for those interested in linguistics and Esperanto etymology. I've never really read much about Esperanto and it's creator and I was quite suprised to learn that he was from the same country as me. Well, people learn new things all their lives! ;) Because of that, I read some articles about Ludwig Zamenhof that are available on Polish sites, and some of them contained facts not found in English verions. Here's a little background information about the creator of the most successful constructed language, and why some words may be influenced by Slavic languages.

Ludwig Zamenhof was born in the city of Białystok, in Poland, while it was under the Third Partition (by the Russian Empire, the Austrian Empire and Prussia; map of occupated territories), so Russian and German were widely used and the usage of Polish was restricted. He could speak both Russian and Polish fluently. His hometown - Białystok - is located in the north-eastern part of Poland, close to the borders with Russia, Lithuania, Belarus and Ukraine. 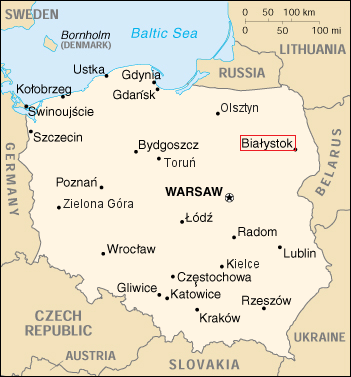 Ethnically, Białystok citizens were mostly Polish, Russian, Belarusian, Lithuanian, German, Jewish and Tatar. Zamenhof was of Jewish-Lithuanian descent, could speak Yiddish, probably also Lithuanian and Belarusian, and German; he studied Classical languages such as Latin, Greek, Hebrew, Aramaic, and to some extent English, Italian and French. He even learned another constructed language, Volapük.

He strived to create a lingua franca that would enable the diverse enthic and minority groups to find a common language, as he considered the lack of ability to communicate between them as a source of their conflicts.

Zamenhof, apart from being an accomplished linguist, was also a certified medical doctor (ophthalmologist) and a writer. A true renaissance man.

Esperanto is mostly infuenced by Classical and Germanic languages, but some words appear Slavic in origin; that's due to Zamenhof's ethnic and his hometown's historical background, as he himself said in his letters:

"The place of my birth and childhood years, Białystok, shaped all of my future endeavors. Białystok's citizens consisted of Russians, Poles, Germans and Jews. Each of those elements was hostile to the others. In such a city, more that anywhere else, a sensitive nature feels the weight of multilinguality, and at each step draws conclusions that the diversity of languages is the only, or at least the main, reason for dividing the human family into hostile parts. I was raised as an idealist, taught that all the humans are brothers, while at the same time on the streets and playgrounds, everything along the way was letting me know that humans do not exist, there are only Russians, Poles, Germans, Jews."

The sentiment behind the reason for Esperanto's creation is really beautiful.

According to this article, Esperanto is:

So it's not 13% Greek only, rather Greek and Latin. Also, many Romance (Germanic and Slavic, too) languages use words delivered from one of the Classical languages, Latin especially for Italic ones, so the word roots should probably be considered as having more than one etymological influence. After all, Esperanto is a lingua franca and it was only logical that the creator would pick words that existed in multiple languages ;)

Another issue is grammar and it's really difficult to discern the exact influences there, because many languages share similar grammatical construction. The suffixes -n and -j probably come from Classical Greek.

I don't speak Esperanto or Russian well enough to pick appropiate examples, but here are some words that are Polish in origin:

I hope you find this interesting, as I certainly did :)

Very intersting! Thank you for sharing this! ^.^

I can see the Greek influence in the tenses and in some function words like kaj [and] as well. The French influence didn't hit me until recently, though.

The 13% Greek suprises me, I expected less. Apart from "kaj", can you give some Greek origin words in Esperanto?

I just found another source and added it to the post. I don't know Greek almost at all, but many words, as with the Romance languages, are influenced by Latin. So it's probably not possible to clearly discern one source, rather multiple interexchangeable ones exist.

Here is a list of words considered influenced by Ancient Greek. I'm not sure how many words are there in modern Esperanto (older citations said about 900 word roots but it's been since then increased) and for how many percent the vocabulary from that list would make up?