There is a sentence that is often impossible to answer correctly in the "Hobby 1" lesson. Looking at the comments, it has apparently caused many people to get the question wrong. The issue is also not one of the reportable options, so it doesn't look like it's getting fixed.

It is a question where you need to translate the sentence "I always eat one slice of bread for breakfast." to Japanese. It is one of the questions where you select word tiles and put them in order, but as can be seen in the comments, the word の does not show up in the word tile options, making it very hard to make it a proper sentence. I didn't get the word 朝ご飯 (breakfast), which is obviously vital to making the correct sentence.

I hope one of the Japanese moderators sees and fixes this.

If this is the same sentence that you did, then all the components of the answer are there; in hiragana and divided between tiles, but they're all there (and as you can see, the answer doesn't really need の). If the sentence components you found were different then apparently it's been fixed. 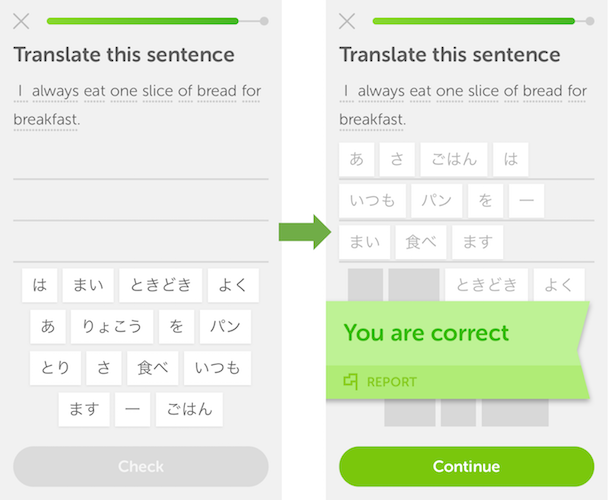 Maybe you got all of the words, but they do not give everyone the same combination of word tiles. There are different extra ones, and apparently sometimes missing ones. And I did this sentence today, so I doubt it's been fixed in that time period.

Sorry, but just saying it is wrong without documentation or concrete examples requires us to take a leap of faith that you are right and Duolingo is not (or the iteration that you are using). Maybe if you linked an image from imgur (like arachnje has) and show us what you are talking about it would take the pressure off of the people trying to help you and make the answer less conjecture.

There is a Japanese discussion board:

It doesn't show up in the options, so I can't move this discussion there. I will post a link to this. (Edit: discussion moved)

I had the same problem while creating posts on the mobile. The dropdown menu gets cut off, unfortunately the cut off part contains Japanese too, because it's close to the bottom. That's why it's more useful to use web version for forum activity.

I am using it on a computer, and it still gets cut off.

You should still be able to reach it by using the down arrow key to highlight which item in the list you want (including ones that are cut off) then press enter to select it. ^^

Already figured out another way to do it, but thanks!

You probably are talking about this one:

No one could have known what happened as you don't have a screen capture or something. Duo has some problems here and there but frankly I truly believe the program is not as bad as that. I don't remember missing any tile in that type of questions (except in the case Duo's translation is bad and had really missed a word in their answer.) Is it because you are not familiar with words without Kanjis (as it is shown in the discussion thread)? Sometime Duo cut up the words not so logically and you need to assemble the Kanas yourself.

Take a screenshot next time.

Yes, I know. And I already linked to it in my post.

If you have an IME keyboard (such as the one Microsoft provides in Windows 10) isn't it possible to write out the sentence? That's been my experience, at any rate.

Maybe some people get it as a question where they need to translate it to Japanese and type the sentence, but I just got the tiles. I do have an IME keyboard, but there was no use in this case.

So here's the deal with counters: They don't need any particles if you put them in their standard position right before the verb!

Yes, you can take all of these and re-arrange their order, but then you need the 「の。」And the counter would go in front of its noun. I'll put spaces in and keep the kanji to a minimum so that you can analyze it better.

Practice counting things around your house and it will get more natural. If you don't know the Japanese word, that's okay. You know the shape, so just "code switch" -- Stick in the English word, put a 「が」after it, then the counter, then an あります(assuming it is an object or plant) or います (if it's a pet or a family member), and just keep practicing until it becomes more automatic. Hang in there!