Just yesterday, I was discussing with a few people this thing that I call the "Dusty Shelf Myth" -- the idea that Esperanto has been sitting on a dusty shelf somewhere waiting for us to discover it on Duolingo. This myth takes a few forms, including the feeling new learners have that they need to re-invent the Esperanto community, and (as we were discussing yesterday), the idea that Esperanto has been in decline up until 2014 or 2015 when Duolingo came along.

I don't believe this myth - in part because the same things were happening 20 years ago and I've seen them with my own eyes.

By chance, I happened upon this chart today. It's just one chart and I don't really know where it came from, but it shows a steady increase in Esperanto's health starting at the end of WWII through the beginning of the growth of the internet.

There's a great (and healthy) Esperanto world out there -- go out and discover it! 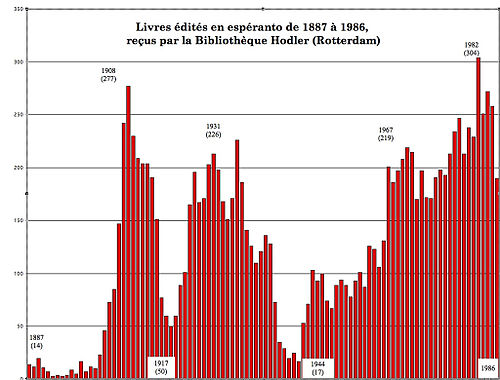 I don't know about other coutries, but in Poland there was an Esperanto "boom" in the 80s. Can't say I witnessed it, as I haven't been on this world long enough ;) In the later years however, there was a sharp decline.

Nowadays, it is mostly known that Esperanto exists, and in 2017 it even received some more attention and media coverage, to mark the 100th anniversary of Zamenhof's death. Apart from that, it's not well known nor spoken, I've never encountered any Esperantistoj meetings or clubs or met someone who speaks it, but perhaps I haven't been looking in the right places.

It's kind of sad that the country of Esperanto's origin seems to be forgetting about it, to me it seems that Esperanto is really easy to learn and could be effective in cross-language communication.

I wonder if there's a particular ethnic background in the US that seems to favor Esperanto more than the others, like for example the descendants of European immigrants?

I think that, completely by chance, I found the source of that chart. There are stats for number of Esperanto speakers there, but unfortunately outdated.

Edit: In my city (with a population of almost 200 000, so averagedly-sized, of which ~60 000 are students), I tried to find any kind of Esperanto club or meetings. I only found a company with a promising name Esperanto... only to find out it's an investment and trading company. On the forums, any inquiries about Esperanto meetings and looking for speaking partners go unanswered. All the books about Esperanto are either biographies of Zamenhof and his daughter or interviews, no translated textbooks available for sale. Well, that didn't go as well as I expected...

Saying "Esperanto has been growing since the end of WWII" is not the same as saying that it should be or ever has been well known, nor that we're should be tripping over Esperanto speakers when we leave the house to buy bread.

There are some clubs of Esperanto in some mexican cities. Also in Mexico city you can find the Esperanto magazine as well as some esperanto books other than biographies.

I would like to find a place where I could see people writing ordinary topical forum discussion posts but in Esperanto. Which I assume I will eventually be able to participate in when I get any fluency with it. (By ordinary topical I mean whatever people are interested in, as opposed to learning-language-specific posts.)

This list of blogs in Esperanto might be what you're looking for. Mine is Ligneroj, near the bottom. I blog about woodworking in Esperanto..

On a historical note, Esperanto tended to decline when anti-Semitism was in a high, such the 1920s to 1945 in central Europe and the language itself was often banned by the same regimes imposing ethnic cleansing because Zamenhof was Jewish himself. (Art, music, literature, etc. by Jewish creators were banned during Russian pogroms and by the Nazis.)

You can see the effect of the world's state on education, as there are huge dips in and around the World Wars in the graph as well.

I think the breakup of the Soviet Union played a significant part in the dimishing the Esperanto's popularity. It coincidences with the decline of Esperanto usage in Poland, where the communism regime ended in 1989 . The "Esperanto boom" took place in the 80s, after that (after the year of 1989) it declined. Anti-semitism also played a large part - Zamenhof was Jewish, even though he stated that he wanted the orthodox Jews to assimilate more and abandon some of their customs:

"In the next years (Ad. Note: after the first Esperanto World Congress: 1905, Boulogne-sur-Mer, France), Zamenhof dedicated himself to diminishing the religious differences among people. He wanted Jews to abandon some of their orthodox customs and assimilate more with other of the most common religions. His new idea was, however, not approved in neither the Jewish, nor the Esperanto environment."

After that, the era of popularising the usage of English language happened, and from now on, Esperanto use is even more rare in European countries, especially those that once were under the infuence of the Soviet Union, although precise dates vary from country to country, depending of the year of their parting from the Soviet Union.

I agree with you, that breakup was not the sole cause. It may have been the catalyst, though.

In many Slavic countries, even those that weren't actually part of the Union, the Soviet Union significantly restricted several nation's individuality, for example by making the usage of Russian instead of the nation's national language mandatory in schools.

When freed from those restrictions, countries put more effort in expressing their individualism and nationalistic movements bloomed. Transnationalism got moved to the background, along with the idea of assimilating with other nations and cultures, in favor of separating and emphasizing one's own culture.

That's only true for the Slavic countries, as far as I know. I think that your idea about neo-collonialism is right. The progressing americanisation and introducing English as a new and effective lingua franca played a big factor in the seemingly "shelving" of Esperanto.

That being said, I agree with Salivanto that Esperanto being some "dusty, old book" is a myth. After all, it's been existing for over a century, not getting endangered or extinct, and still gaining new (and even native!) speakers.

I feel like Esperanto was a dusty book until the internet came along.