i am confused by when Ihr is for female or male, any advice

You are confused by two items that may seem alike, but are not. The word "ihr" means one thing thing when it is a personal pronoun and something entirely different when it is used as a possessive adjective. One wishes that the German language had chosen two words which do not look and sound exactly alike, but that is not the reality. Native speakers do not, of course, have any difficulty keeping the two words separate in their minds. Students learning English have similar problems with the many words that sound alike (and are spelled differently = so, sew, and rain, rein, reign, for example) and words which have a single spelling but the pronunciation changes according to meaning = sow (to plant seeds) and sow (a female pig).

DO NOT use "ihr" for 'you all' when speaking with adults whom you should address with a title, such Sir, Ma'am, Miss, Doctor, Mr., Mrs,.Ms., etc. Many German-speakers spend years working with the same people and never use the familiar singular (du) or plural (ihr) with one another. In all of these instances one must use the formal Sie, which is both singular and plural.

AS A POSSESSIVE ADJECTIVE, "ihr" means; her (something) or their (something) when speaking about 'something' that she or they possess.

In addition, "Ihr," when capitalized, means 'your' (singular and plural) when speaking directly to someone with whom you would use the formal 'Sie.' "Herr Reiter, ist das Ihr Hund? Ist das Ihre Katze? Ist das Ihr Haus?

Hope this is helpful!

Thank you for such a detailed explanation. I appreciate that you took the time to post this.

Here's a table that could be helpful for you. 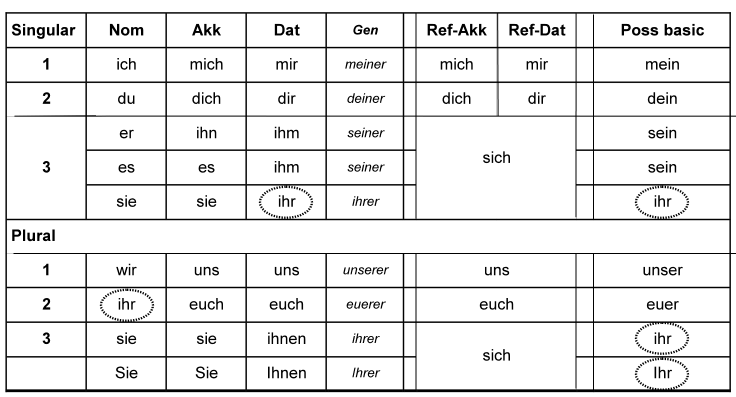 If you are not familiar with the cases, you could start with Nominative - only look at the 1st and last column.

ihr means both "you" in a plural form and "her". so, ihr trinkt wasser (you drink water) or ihr hund (her dog).