can someone please tell me about a software or even a website where I could learn to type fluently in the japanese keyboard layout, the layout with the hiragana/katakana and just to make sure, I am not talking about selecting the layout from my system preferences, I have already selected japanese as the input method and it works but I need to train myself to use it as there are no labels no japanese labels on my keyboard,

Hi! I don't know if that's relevant to your question, but you don't need to learn the kana keyboard to type in Japanese. Any self-respecting input software for Japanese has "romaji input," which means that you type in the words as you hear them (e.g. on a normal qwerty keyboard you type T and then A and you get the kana for た). Even keyboards produced in Japan for the Japanese market have that option. Good luck in either case!

Are you aware that you don't need to use the kana keyboard layout to type Japanese? Even the majority of Japanese people don't use kana layout on their computer keyboards. (source)

The most common way Japanese people themselves type Japanese characters is by using normal romaji alphabet keys. You type K then A and then the IME automatically turns those two letters into か on your screen.

All that being said, I don't actually use romaji input myself! I did use it for a long time up until five years ago but then, for better or worse, curiosity got the better of me and I decided I'd like to try switching over to kana layout... However, even now I'm not sure whether I can really recommend other people to use kana input. Your life will be much easier if you stick with romaji input. For one thing the standard kana layout isn't very friendly unless you have gigantic hands, because it uses four rows of keys as well as several extra keys on the ends of the rows...

That disclaimer out of the way, the way I learned the standard kana layout five years ago was mostly by using the offline kanji learning game "Slime Forest Adventure". It's available for Windows, Mac, and Linux. It has many subgames available from the menu, one of which being a "kana touchtyping" trainer: 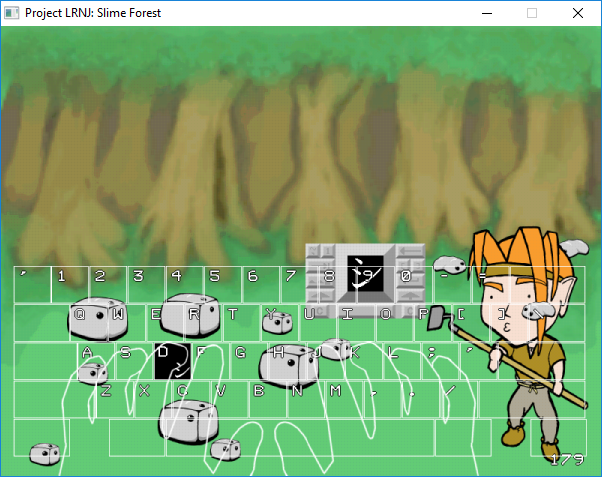 For a completely free typing trainer which teaches kana layout, my favourite is 美佳のタイプトレーナ ("Mika's Typing Trainer"). It's more of a proper typing trainer compared to Slime Forest's subgame. However the programs are all in Japanese and I think only available for Windows computers. Here's the link to the homepage anyway if you're interested: 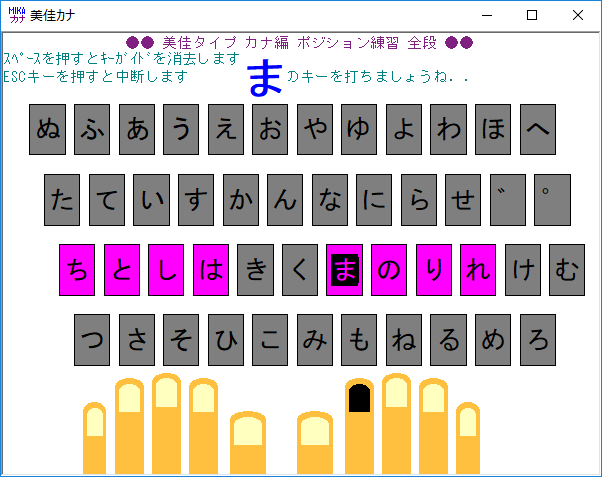 just what I've been looking for thanks, and i'm asking for this not because I want to use the kana input method for my everyday life but because I thought using the kana method would be a great way to adjust my mind with the japanese writing system,I also used the romaji input just switched to the kana input a month ago and I don't know how to and had not bothered to switch back, because just like you curiosity got the better of me I wanted to test myself on how fast I could learn the kana layout.

Great! I believe it should help for that. I think using kana input focusses your mind much more on how kana work and the correct way to pronounce words. I think it helps train your mind in thinking more naturally of the sound of the Japanese language.

I don't think it's good to be thinking of consonant and vowel keys for each kana. Romaji input can make things less obvious to your brain, such as how many moras you are typing and absentmindedly thinking things like "shi" and "sha" contain the same number of kana. It's also nice typing は directly for the "wa" topic particle, rather than having to tell yourself to type H then A everytime. Pressing the keys こ ん に ち は rather than pressing K O N N N I T I H A seems much better for your mind to be focussed on when typing Japanese. Loads of other stuff like that.

I've had a strong interest in Japanese keyboard layouts for a long time. If you have any questions or problems concerning those programs or concerning kana input in general, I'll hopefully be able to help. Have you tried out either of those two programs?

I'm considering changing to a Nicola also, do you use a thumb keyboard to type in Nicola or do you use a normal English keyboard, in which case what keys do you use as modifiers and how did you configure it

I started off with romaji input method, for however many years.

Then, about six years ago, I learnt normal JIS kana layout on a normal English (UK) keyboard and typed Japanese this way for about four years.

About two years ago, when I decided I wanted to try switching to Nicola thumb-shift kana layout, I decided this time I'd really need to purchase a Japanese keyboard specifically for it.

Some of the key faces started to wear off rather quickly though. And then my 3 yr old nephew broke it. So I'm now using the following one: 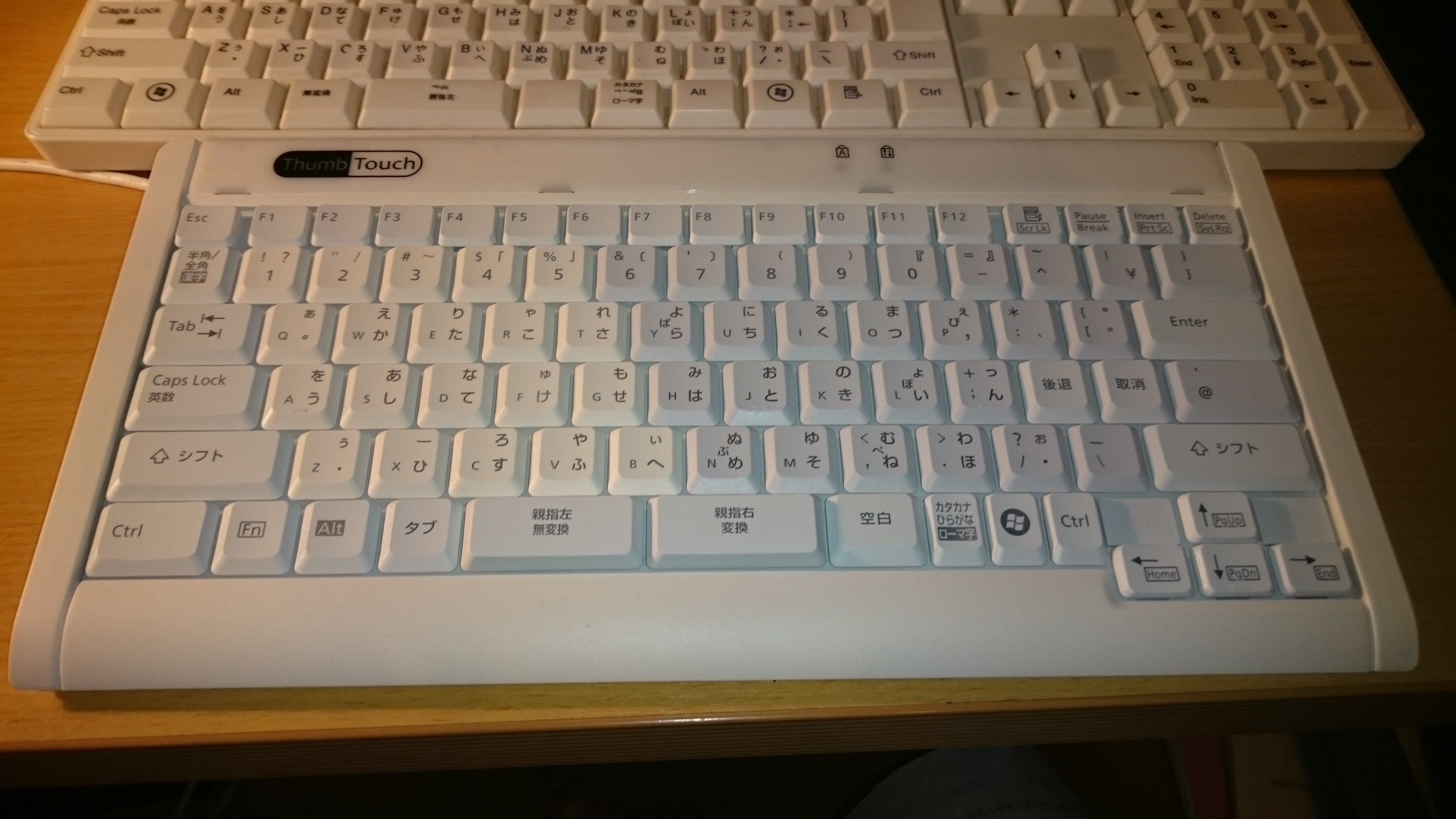 Even when you buy a thumb-shift Japanese keyboard, you still need software to make the thumb-keys and layout work. Therefore, it makes no difference what keyboard you have.

You can use any old English keyboard and set whichever keys you want to act as the modifier keys. However, the problem is that there aren't really any comfortable keys to choose for the thumbs on English keyboards, all because the spacebar is so stupidly unnecessarily long. ^^;

The main one I've used and am currently using is DvorakJ:
http://blechmusik.xii.jp/dvorakj/

Here are some others I've used:

Thanks a lot, I will look into it.

Mika Kana looks nice, but unfortunately doesn't seem to work on Windows 10. The problem is that the kana input opens a predictive text window, and the program doesn't register the key stroke. I guess that's why the website says only Windows 7 and 8 for Mika Kana.

However, here on Reddit a japanese speaker pointed out some japanese language typing training websites: https://www.reddit.com/r/LearnJapanese/comments/2hi9k8/japanese_typing_practice/

out of these, i could only get the last one to work, where you need to register for an account (it's easy though). and i could only get it to work on Mac, not Windows 10, because there my ゛was input as 「. https://www.e-typing.ne.jp/member/kana/practice/basic/ (once you've logged in, go back to this link. then, start one of the practice trainings like the home row)

or if you want to practice the full keyboard (though i recommend to learn limited key sets like the home row first): https://www.e-typing.ne.jp/member/kana/practice/practical/

note that i didn't try these super old Windows 95 and Windows NT programs.

Sorry, I only just noticed this reply from 8 months ago. ^^;

MikaKana does indeed work on Windows 10. That's what I heavily used MikaOya on in 2016 anyway. In fact, that screenshot in my earlier comment is actually of me using MikaKana in Windows 10. Just tested it again now and it's still working. ^^

However, there are a couple of things I should have mentioned that you need to do to stop the problem you had from happening:

MikaKana should work perfectly when both of those two things are set. ^^

(Note: If you use Google Japanese Input instead, unfortunately it doesn't have any kind of "no conversion" setting at all. So you'll need to use Microsoft Japanese IME for this typing trainer.)

Just use notepad and type each row on a separate line, over and over until you remember which letter is under which finger.

You can also see the layout here and it will come up as a small window that you can put near the bottom or top of the screen outside the window that you are using. https://docs.microsoft.com/en-us/globalization/windows-keyboard-layouts

I'l try, and thanks for the reply, hope theres a similar one for unix

Learning to type in the Japanese keyboard is tricky. It uses letters different from the hiragana and katakana alphabets. I suggest you learn the alphabets first, then once you can read with ease, you search trusted websites with reliable information on Japanese keyboards. I was searching it up today, and it's pretty complicated to me. Good luck. Just make sure to type in romaji, or it won't make sense.

I can read and write katakana and hiragana but I can't read many kanji, I don't know where to look for a spam free site, when everythings in japanese