Translation:We always travel in the month of July.

This is such an awkward way of talking in English, is this actually the correct way of saying this in Spanish?

Do you mean the "the month of July" part? It's a "correct way", but not a natural one.

I think this exercise is simply trying to use a sentence with the word mes (month) and then a named month, julio (July). Is it a little awkward, sure, but it doesn't really matter. You're here to learn grammar and vocabulary so don't get too stuck on the wording in the sentences. Believe me, if you get to the point that you can write to or speak to a native Spanish speaker you are going to sound awkward using the language so I wouldn't even worry about it.

"We always travel in July" is accepted

would siempre viajamos en el mes de julio be fine? is the nosotros at the beginning needed?

would - we always travel in July - also work?

Semantically, yes. However, since in the sentence, there is en el mes de julio, the translation has to be in the month of July

Sure, but it's sort of troubling considering nobody would normally say it this way in English

Nor in Spanish. 'In July' is accepted.

Although its not a majority use, i do hear it used enough to disagree with your statement. Usually when someone is scheduling, they often stress 'the month' even if its not necessary. Like when making an appointment, i will find myself and others saying something like, 'Do you have anything next month? No? How 'bout the month of June?'

No, Aminehaji1, I disagree. The point of translation is to render into another language the correct and properly used essence of the original. Therefore, it is better to omit the "the month of". To mark "...in July." wrong would be wrong. Likewise, even if, in Spanish, a sport has a definite article in front of it (like el futbol) , we would not translate as "the football" would we? Your argument would indicate that we should.

You should only translate it into the "correct and properly used" form if it's in that form in the original sentence as well. In Spanish you would normally also just say "en julio", so the addition of "el mes de" carries some significance that should be translated as well.

Thanks! This clarifies it for me a lot. I thought "en mes de" would be necessary - obviously it's not (but why bother anyway - what other "julio" could you think of?!)

No it does not. I wrote "in July" and it was obviously accepted.

it would work in everyday speaking, but this sentence specifically contains the word 'mes', so you may have to include that in the sentence.

the female "voice" for this phrase is so fast that she doesn't actually enunciate all the words. As a learning tool for people at my stage it is definitely not helpful. The slow version otoh is super slow. I've complained about this multiple times and many people have agreed and still waiting for an improvement. The male voice is much better and therefore helpful for learning.

Unless you use the report function for the sentences, your complaints won't help a lot. This here is a user forum. The people in charge don't really look into them.

I agree and I have and I do report as well as use the forum. Not sure if the "people in charge", whoever they may be, really look at the reports either! Hopefully the "voice" thing will be improved eventually.

Of course, they do look at the reports. It's just a matter of when. 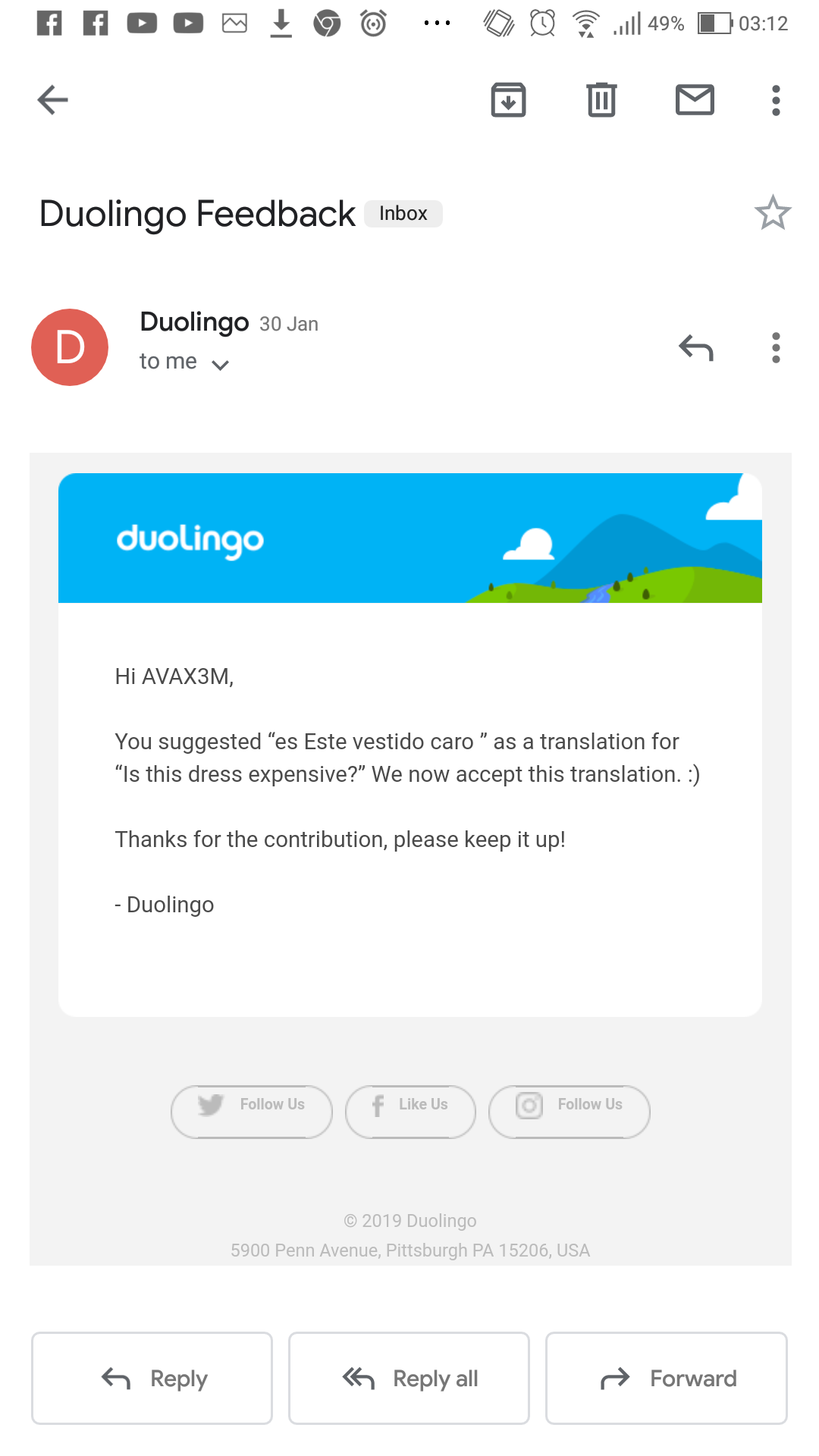 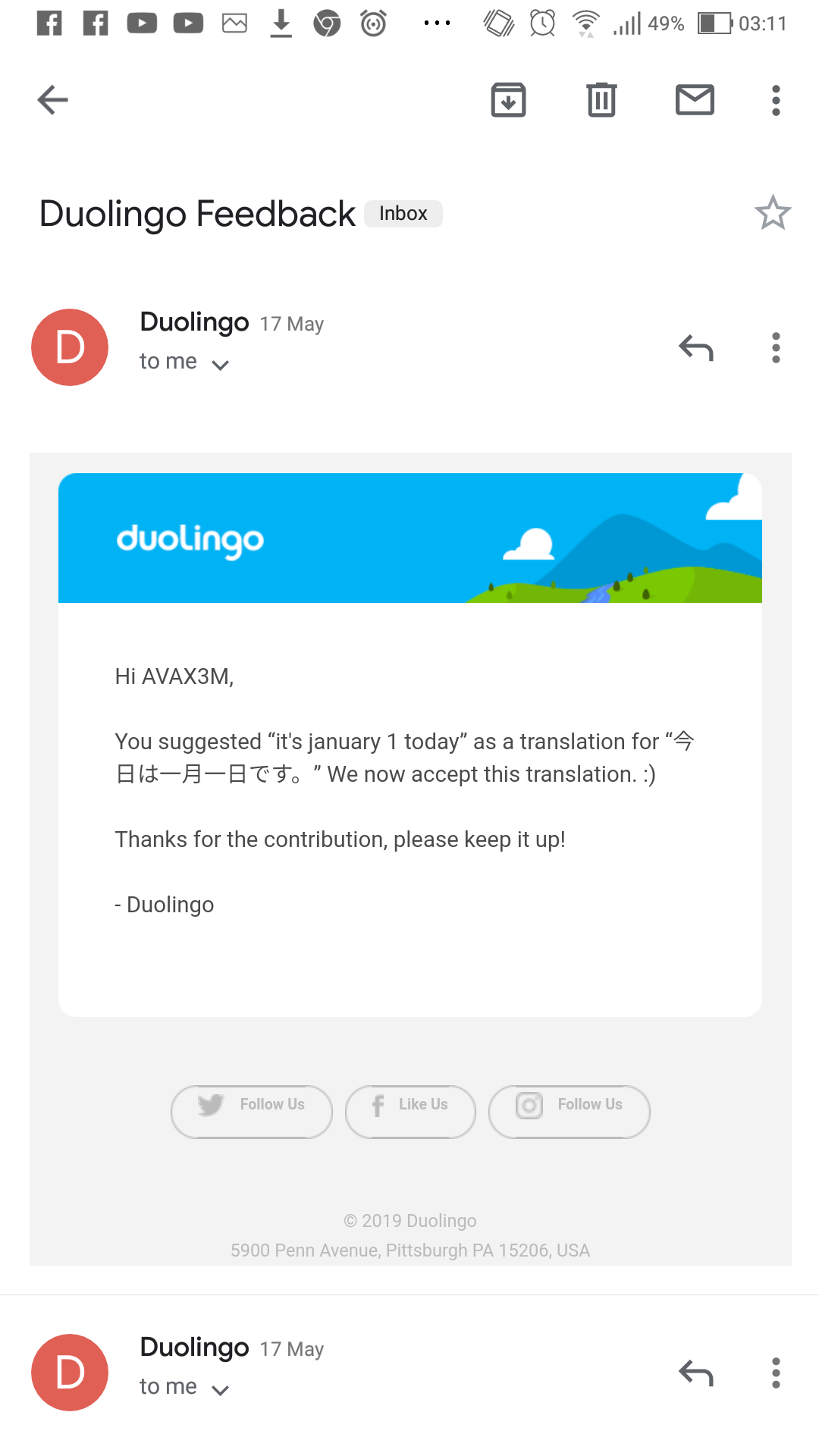 I used to get those a lot but now I don't. I searched and there wasn't a single one in my inbox.

The course moderators do look at reports. I regularly get messages that they accept additional translations I reported. Things are just a bit more difficult with the voicing. Since it's a text-to-speech software that's developed by a third party, there is a big threshold for modifying the voice - or throwing it out entirely and buying or even commissioning a new one.

When is nos used vs nosotros

'Nosotros' is the subject pronoun 'we': 'we travel'. 'Nos' is either an object or a reflexive pronoun: 'Él nos da el libro' (object) = He gives us the book; 'Nos levantamos' (reflexive) = We get (ourselves) up.

He simply does not pronounce this correctly at normal speed. Disgraceful teaching.

I know we're here to learn Spanish but I feel like the word disgrace is thrown around too freely. I mean a disgrace is like losing respect or bringing shame to your family or company.

I just gotta disagree with you here. First of all it's software, so it's bound to not always pronounce everything correctly. My Google assistant mispronounces stuff all the time. I wouldn't call Google a disgrace for that.

Of course you'll say this is supposed to teach us so it's different and I agree. But what it's supposed to "teach" is for your ear to get used to hearing the Spanish sounds spoken. Even if you don't think so, I can guarantee it has helped you especially if you hear it daily.

I can think of a handful of times where I could not understand him and had to use the slow version and most of those ended up being words I had not heard before so my brain just wasn't getting it at normal speed.

Trust me as you are exposed to the language more and more your brain will fill in the gaps and make corrections when things are pronounced incorrectly. You do the same thing in English everyday. It's just that we don't know enough Spanish words to be able to do that.

If you watch any Spanish TV or listen to audio people don't always enunciate clearly so one could argue that if the software spoke perfectly and enunciated everything it really wouldn't prepare us for real spoken Spanish.

Is mez pronounced "meh"? or is it just this woman?

Final s's on words are often not pronounced very clearly.

Why does the female teacher, in particular, insist on dropping the ends of words. In this case, the "s" from the end of mes. It may be obvious to a fluent speaker but not so when there are many other things to concentrate on at the same time. When I was at school I would get my knuckles rapped for not pronouncing words properly and to this day it still annoys me when is happens even in my native English tongue. What chance do we students have if our teachers haven't got a full grasp of their chosen subject. Grrr... OK. calm down and breathe slowly. Rant over.

"We are always traveling in the month of july" should be accepted, no?

Yes, I believe it should.

No unfortunately, because you have added "travelling" (the present participle, I think), which doesn't exist in the Spanish sentence, and would be written as "Nosotros siempre estamos viajando en el mes de julio", instead.

What is the difference between 'de' and 'del'? De julio [of July] but 'Las pinturas del museo'

Del is the contraction of the preposition de and the masculine article el, so it's rather "of the" than "of". Since month names usually don't get articles, you have "de julio" there.

So when i was in school, i learned viaja as "holiday" is this incorrect? I didnt know viajar was the verb "to travel" and im a little confused

I've never heard that used as holiday, but I know that "un viaje" is a trip. Maybe that's what you're thinking about?

It was a woman speaking, so naturally wouldn't you say "nosotras", NOT necessarily "nosotros"?????

Unreal comments here. Do you want to learn Spanish or just criticize the teaching. Its not just about if you can make this sentence perhaps we can use the information learned to build a different sentence. Man people don't be so ignorant.

Doesn't, "We travel always in the month of July" also work?? I got it wrong.

Of course it's not the best way to speak English, but the grammar isn't wrong. Shouldn't Duolingo accept alternative sentences?

It is correct. It's just that such an order is not really commonly used enough to be one of the possible answers stored in the database. In this case, you have to report it so they can add it.

It is poor English to say in the month of July, instead of just July

I don't think it's as common in usage, at least in American English. I tend to see it more in literature, but I wouldn't say it's "poor English". It may be more common in one of the other populations that speak English besides yours.

It is not poor English; it's wordy. Just as saying "en el mes de julio" is wordy in Spanish

We always travel on July, or, in July - I think it should be accepted. Nobody I know says: the month of july.

eylon Do not use 'on July'. On is used for days of the week I work on Monday, Thursday and Friday. Use 'in' when referring to a time span: in a week, in the summer, in a decade, in a minute etc.

The same is true for the Spanish sentence using "el mes de" instead of just the month's name. So there must be a reason in the context of this sentence for why the speaker chose to include that redundancy.

I put this phrase,got it right but it said it was wrong