Translation:The butcher shop is small, but all the meat is good.

"The butcher shop" is not correct English

I have never heard a "butcher's" referred to as "butcher shop" before.

As requested, a screenshot: 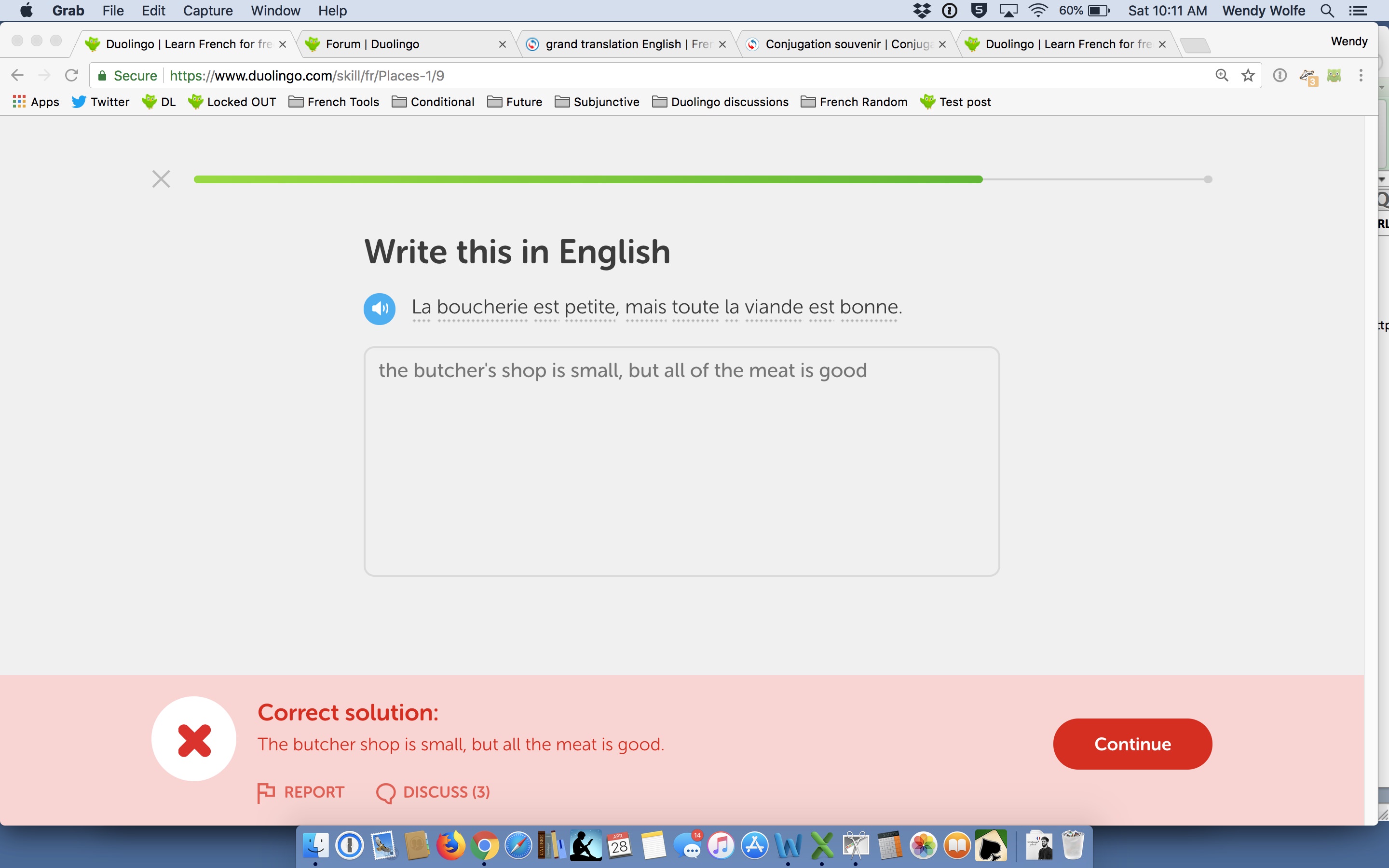 I think if you want to say "the butcher's shop is small, but all OF the meat is good" then that would be "La boucherie est petite, mais toute DE la viande est bonne. ", that is probably why Duolingo rejected your response.

Interesting. I'm hoping one of the course contributors will chime in.

I realize that the online translation tools are imperfect ... Google xlate doesn't differentiate between the two.

As I mentioned, I understand that Google xlate is imperfect.

I think what I need to do is talk to an English editor and wrap my brain around the English semantic differences between "all the meat" and "all of the meat".

EDIT: It hinges upon the use of "meat". If English definite or indefinite. "We often use of after all in definite noun phrases (i.e. before the, possessives and demonstratives), but it is not obligatory."

To my eye, in this instance it can not be the mass noun (all meats, as in the junk food example in the below) because of the context. Therefore I still wonder why the optional "of" is disallowed.

(Continued ... comments from a friend who is a Sr. Editor)

Definitely not Chicago [Guide to Grammar]; they use "all of the [nouns]" throughout their manual. There's an assertion in the linked article that "the variant without 'of' is significantly more common than the variant with “of”, to such a degree that the variant with 'of' might be considered unnatural (or colloquial) by some native speakers in certain contexts." But [in the below link], there's no reference for this assertion and as noted, respectable publications use that construct, so I don't know where this [site, meaning jakubmarian] is coming from.

I appreciate the grammar lesson, and I agree with you. I graduated with an English education degree, so hopefully that carries some weight.

All (of) the meat is good. "All" is the subject, "is" is the verb. "Of the meat" is a prepositional phrase, meaning we can eliminate it and the sentence still stands... "all is good." A prepositional phrase must have a preposition, in this case "of". We can understand meaning without it, but it's not gramatically correct. It sounds like informal, street English. On some occasions I condense language ... texting, taking notes, but not when using complete sentences.

Since "of" is implied and should be in the sentence, I hope Duo adds our sentence as a correct answer. Or I hope someone else enters the grammar discussion and can prove us wrong.

So, why is it toute la viande instead of toute de la viande?

Personally, I would only ever say "the butcher's". I got it wrong for leaving out "shop".

what's the difference between "bien" and "bon(ne)"?

for crying out loud! The PROPER English is "The butcher shop is small, but all OF the meat is good". DL marked this as wrong. The DL translation might be commonly used but is NOT proper English!

the CORRECT English is "but all OF the meat is good". Please correct this DL!!!

my main problem, since I am learing french from english, while english is a foreign language for me (mother tongue german), that duolingo often demands solutions that are weird.

this is something that needs to be addressed

Type what you hear... it is very difficult to guess the sentence when you do not hear anything the sound of Duo goes on and off.

why so long giv eme linghot

I wrote the same and was marked wrong also "the butcher shop is small, but all OF the meat is good"

I think butcher shop and all of the meat are American usage, whereas butcher's and all the meat are UK usage, so they should both be allowed. I'm not French, but i don't think you can say "toute de la viande" here.

I actually know a butcher or two. I've only heard "butcher shop" in English, never "butcher's shop" or "butchers shop". Maybe it's regional?

May 29, 2020
AboutDuolingo English TestMobileHelpGuidelinesJobsTermsPrivacy
Learn French in just 5 minutes a day. For free.
Get startedLogin