Translation:Only the t-shirt that she slept in is left of her.

Why is "Only a t-shirt in which she slept is left of her" is wrong?

It is a specific t-shirt, so we use the definite article "the".

I'm a native English speaker and "a" seems ok. Maybe she spent the night often and only forget her shirt once. Unless the Czech implies otherwise.

I don't understand. Forgot? Are we speaking about the same sentence?

Lol I imagined her leaving it at someone's house. But she could have many shirts she sleeps in.

I think we both think of something completely different. "Zbývá z ní" means that the only thing that remained of her is the t-shirt. Her body is missing.

Oh so it's not lyrics from a country song. I get it now. Thanks

Well maybe it is, maybe she is just gone on her merry way. When I think about it longer, it is also possible. But it was not the first meaning I that came to my mind.

I wrote 'Nothing remains of hers but a shirt that she slept in', why would that not work?

I agree with Shathu that 'a' works just as well as 'the' here. I think 'the' would be more like the translation of 'Zbývá z ní jen to triko, v němž spala.'

The a may become accepted but I don't feel to be the most quslified person to do that.

The "her/hers" distinction is tricky and I'm not sure which of these sentences is what the original Czech was trying to mean but here's how I'd understand these sentences in English as a native speaker:

"Nothing is left of her but the shirt she was sleeping in" = she was wearing that shirt at the time that she disappeared without a trace, a bomb exploded in her house, or something similar. The shirt is the only thing remaining. The rest of her body, etc. is gone.

But she must have been wearing that specific shirt when she disappeared, otherwise it wouldn't be counted as part "of her," it would be simply considered a belonging and you'd say "of hers."

"Nothing is left of hers but the shirt that she slept in" = she is gone, and the shirt she slept in is her only possession that remains. She had other belongings, but they're all gone.

Usually when you'd say "nothing is left of him/her but" it's literally a part of the body that remains after the rest is destroyed, but sometimes it can include a thing that a person was wearing at the time they were destroyed. For example some examples from google:

"she trembles once, twice, and slides against Celia in a heap on the sidewalk, smoking like a wet fire, sweet and musky, until nothing is left of her but her fringed cotton shawl"

"Heartbroken, Echo spends the rest of her life yearning for Narcissus in lonely glens. She eventually wastes away until nothing is left of her but her voice"

"Mombi is ruthlessly doused with water and melts away like the Wicked Witch of the West, so that nothing is left of her but her buckled shoes"

"However she has taken with her the things one never leaves behind: almost nothing of hers remains in the bathroom and my toothbrush is alone again"

"Hatshepsut's tomb was probably looted soon after it was sealed. It was never found and nothing of hers remains in the world"

"Nothing of hers remains inside the house"

But we have "zbývá z ní", that is not just a belonging somone left somewhere, that means it is a remaining part her.

To be sure I opened the national corpus and search for "zbývat z" and I am pretty sure it really must be that it is the only part of the person that remains.

For some belonging left behind you would use "zbývá (tu/tady) od ní...".

Thanks this is helpful to confirm.

"she trembles once, twice, and slides against Celia in a heap on the sidewalk, smoking like a wet fire, sweet and musky, until nothing is left of her but her fringed cotton shawl"

This is exactly how I understand the sentence in the exercise. 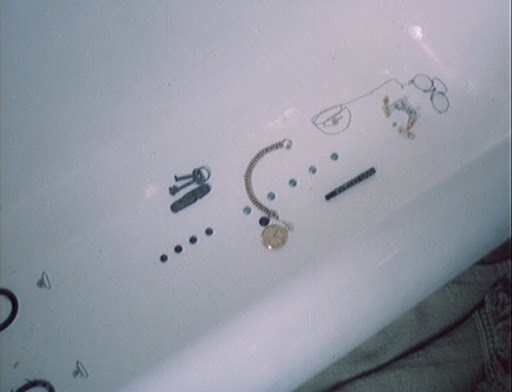 This is a more natural English translation: "She left only a t-shirt that she slept in".

My take, FWIW: The subject of the Czech sentence is not "she," it is the t-shirt. "She" has somehow mysteriously disappeared, and the only thing left to show that she was ever there is the t-shirt in which she was sleeping. If "she" were the subject, I think we'd have a different sentence in Czech.

What happened?? Did she disappear??