Currently, if I hold my mouse over "food", I get a drop down Essen Lebensmittel Nahrung

I would find it super helpful if I instead got a drop down Essen (GENDER: NEUTER) Lebensmittle (PLURAL) Nahrung (GENDER: FEMININE)

Ohgod that sounds AMAZING. I already struggle a lot with my brain going through periods of hating everything about the language and being unable to touch it, but having this extra little bit would help me stuff a bit more in there while I can. I would fully welcome this addition!

i guess it would be helpful for most german learners.

die Lebensmittel (more than one item)

The word Lebensmittel is not really used in the singular form. No German would ever say "Ich kaufe ein Lebensmittel." If they really bought one grocery item, they would be more specific. Or, if they were going to be vague, they'd go for "Ich muss noch etwas kaufen."

And yes, I too am totally in favor of always including the articles with the nouns!

That is completely right in spoken German.

On the other side, one can find the use of the singular form in i.e. newspapers, non-fiction books, TV news and information etc.

But, yes, those are rather special examples and are only used in scientific/informational context.

Ah, yes, good point. Didn't think of that. Thanks for those examples of Lebensmittel in singular use.

Sometimes we German also say if someone asks what we want to buy: "Ich kaufe Lebensmittel ein." or "Ich muss noch Lebensmittel einkaufen." (The last sentence is often used if we want to do this short after saying it or at the same day.)

It can mean "groceries", but it doesn't always. https://www.dict.cc/?s=Lebensmittel

sorry but that list is ❤❤❤❤❤❤❤❤. we use the word Lebensmittel only for groceries. at least i as a german have never used it in any different way and i have never heard anyone using it for anything else but for groceries

I'm not 100% impressed by the German course and the way it doesn't help one memorise genders. The Italian version of Duolingo is stronger but that's probably because genders in Italian are easier to figure out.

I completely agree. It would help for most of the gendered languages e.g. Dutch, Swedish, Russian, French, etc.

That would be great!

Super idea! We need it.

Totally agree. When learning German it is not always about one word. The basics are gender. It is an easy start if one always remember to learn the gender too. It is not Brot. It is "Das Brot". Please, learn that, from the start. Later, everyone will meet accusative and dative, and knowing the gender of the word, will greatly improve the learning. I still do not get it (like in the language), but I know it is true.

I hope this is helpful

I find it so stupid that they removed the gender display of a noun in this new Crowns version. When I see the translation of a noun I want to see the article as well, this is the proper way to learn german nouns. So dissapointed in Duolingo.....

I understand you but our gender changes with the use of the noun in the singular, plural and in the four kinds of use for Nominativ, Genitiv, Dativ and Akkusativ. I have no idea how to show it without complete examples of use

To take an example from the video you posted:

Cases are precisely why I would find it so helpful if Duolingo always told me the gender of a word. Suppose Duolingo asked me to translate the following sentence from English to German:

I give my father's book to the woman.

It would be great that Duolingo taught me that translation, but currently, when I hold my mouse over "woman", it would only show a drop down "Frau". So in the translation, I would not be sure whether "der Frau" is a masculine word in the nominative case, or a feminine word in the dative case, or a feminine or plural word in the genitive case. If, instead, when I held my mouse over "woman", Duolingo gave a drop down "Frau (feminine)", then I would know that "der Frau" is in the dative or genetive case.

(Separately, if Duolingo also added a feature which allowed me to reveal the cases within a sentence, that would also be amazing! But I expect that would be harder to implement).

Becky, you did a good job explaining what it’s all about, gave you a lingot. I also expect Duolingo to simply display feminine, masculine or neuter together with the translation of a noun, or the article in nominative case, the basic article of each noun der, die, das, whatever they find suitable. I expect this in German stories too, would be so helpful.

ah now I understand I think what you mean: You mean if someone goes with the mouse over "child" there should be for example "Kind (n.)"? The idea to show the gender this way could work without to confuse if it is used in a flexion I think.

I'm having so much trouble with German because of this. 90% of the mistakes I make are with the gender of nouns, it's really hard to just memorize every single one. I know some basic rules to determine which is which but I would really love if they could just show the gender in the first place.

Well I know German is only hard because of articles and flexions. For me as a German I often hear only mistakes like this if someone make training rounds with me. Let me help you a little:

In Germany it is allowed also in schools to use a "Duden". The Flexions and articles are often shown here:

i love this idea!

Not including the gender in the mouse-over hint is bad enough, but including it for the English translation of a German word (even though English doesn't have gender) and not for the German translation of an English word is just sheer insanity. It forces you to either a) waste time looking up the gender on another app or website, or b) just guess. You could argue that having the gender provided so easily doesn't help you learn it, but neither do a) or b).

There are some basic rules for learning a language for every single one. In a German class, it is a must to write down nouns with their articles together into the vocabulary. Similarly, if I would held any English class, I would prohibit writing down any vocabulary without correct spelling information.

Writing something down doesn't mean you've learnt it, though. I generally write down new nouns with their articles in my German class, but I don't have that notebook on my desk when I do Duolingo at work. I have a notepad on my desk with similar notes, but moving stuff off it and finding the right page is a chore, I'm afraid, and breaks the rhythm of completing exercises.

I agree that would be great idea.

Maybe it is not possible to do this for German completely here with Duolingo there is a bar chart you can find with google about the "vier Fälle im Deutschen" and you can use the "noun + Kasus" (Nominativ/ Genitiv/ Dativ/ Akkusativ) for researchs.

German is flexible with the articles. It is ever depending how it is possible to ask the four Questions:

For advanced learners I recommend a book called "Der Dativ ist dem Genitiv sein Tod". it is a book full of humour about the dramatical daily use of the Genitiv and Dativ. There are a lot problems shown German people have too. Example:

Please do not give up with this lot of stuff to learn in German as a language. I can promise to you that we German all know how difficult this must be for someone who is not grown up with it. A lot of us have great respect for all who try it.

That would be insanely helpful

Maybe you understand the problem with showing the article after seeing this video. Duolingo tries very hard to help you all with my native language.

ParPortas, if DL chooses to display the article, instead of the gender, it needs to make clear that the article is in Nominative, the basic article of a noun, that you also find in dictionaries. This is not a discussion about declension (Deklination). We all know that the article changes when the noun is in a different case. As other people said before, the gender never changes, only the article is different depending on the case.

jepp I missunderstood the discussion. I saw it and I appologize for this to you all.

That’s ok. I just wish somebody from DL reads our suggestions. It’s unbelievable to me how they decided to simply skip such an important information - gender.

It seems that by now, all genders are removed from the app and browser, on the popups for the German and English words. Would be great if this could be added, since it really helps in understanding the rest of a sentence (which is German is heavily influenced by genders) and helps remembering the genders.

I made some screenshots to illustrate. Android app: 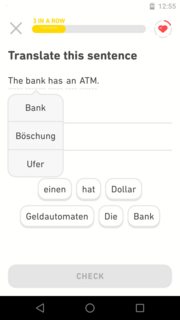 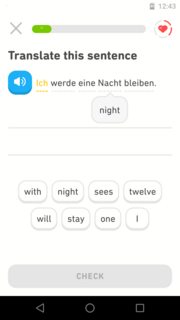 And the browser version: 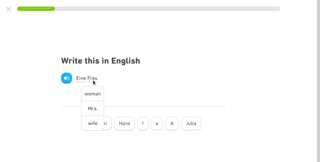 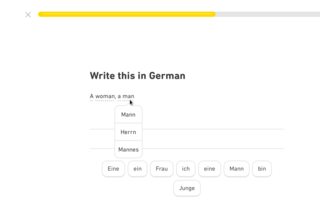 Duolingo doesn't seem to be innovating toward making learning more efficient, as this feature would take a day to implement and has been requested for over half a dozen years as far as I could see.

Best option for us learners is to use PC and create a browser extention that does the job for Duolingo..

Absolutely agree. I downloaded an app from SmarterGerman and it is a game to learn the articles. VERY useful!