Other languages have slow speak. Chinese and Japanese need this even more since there is not space between the characters. For many reasons this would be a useful feature. Duo please add.

I have these for Japanese, at least on questions where you listen and select the words. Do you mean something different? Like on example sentences?

Super interesting. I don't have exercises like that for Japanese or Chinese. I sort of think most people don't; of course I'm not sure about that.

Here's an example. I use the heck out of it, though I clearly didn't use it enough this time! Lol I always miss hearing 行 when there's a に in front of it. FWIW, this example is for travel, which I only have one crown in. Not sure if that matters. But I'm confident I've always had them. A/B testing again, perhaps? IDK. But they are definitely useful! It's helped me tremendously, so I do hope they roll it out to everyone, if they really haven't. It's certainly needed, IMHO.

I do think exercises like that would be useful. Wonder if it's A/B testing or an app version thing. I have iOS.

That's a good question. I am on Android, but I would imagine the A/B test is more likely, as they usually give iOS so the toys first. E.g., we waited longer for Japanese, it took like a year to get TinyCards, and we've never had bots. So I'd be pretty surprised if they threw us a bone first. Lol But I hope you get it soon! I really do think it's useful.

It might be both Android and an A/B test ;)

There are important counterexamples to iOS getting everything first. Most notably: iOS still doesn't have discussions on the app. Android got achievements and Duolingo Plus first. And I think crown levels were first tested on Android.

If it helps, we don't have discussions on the app, either. Lol Didn't know about the others! Very interesting!

Weird! My friend does, and I've gotten the impression around the forums that that's the general situation on Android. Maybe they open the browser instead of being right in the app, but at least they're accessible.

Maybe it's another A/B test! Lol

there are no sentences when you start only letters ki no and the like and than you learn to read words, so i do not have comments for Japanese all very good with 3 alphabets!

I couldn't agree more... Chinese is way too fast.

I think Chinese is not so fast, (at least for me, who have Mandarin as my first language). It just has some other features that make it harder than most languages.

As far as chinese go, native speakers sound like machineguns, so if anything Duo is getting you prepared your your first face to face dialogue haha

i can assure you that in a wink of time you learn in full speed what is said, i also experienced that!

Chinese audio speed is tough for me as well ahaha

Yes, I agree. It would be very helpful.

Do people have a slow option on sentences that aren't write what you hear? I don't think I have ever seen such a thing. My presumption is that there doesn't appear to be a slow mode simply because there don't seem to be any write what you hear questions in these courses. Of course, I would be very interested if anyone has experienced something different.

Ah, so that's where all this talk of a turtle speech feature comes from?

I had noticed the keyboard shortcuts lists one for replaying the audio slower. I wondered about where this was used. I don't normally ever have the audio turned on anyway as I prefer listening to music, but I've tried it before and Ctrl+Shift+Space didn't play the audio any slower. 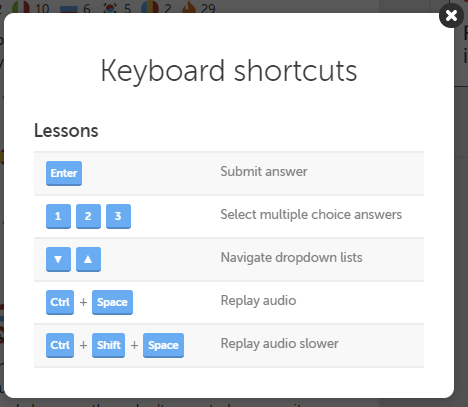 I'm surprised nobody has made a userscript to add turtle speech to the normal sentences. It's certainly not impossible. I've just had a go playing around with it. I was able to set it to play the sentence audio anywhere between 0.1x ~ 1x speed (and faster speeds too, as if faster is what people want!) :P

I had a speaking exercise today and it was around 20 characters long and it made me wonder if this has been suggested. I have the Android version and I also do suspect I'm making this language considerably more difficult insisting on using Android there. But it's a valid use case and platform so seems like it should have a slow feature.

That being said, it's a crazy mix of questions where 3 of 15 exercises will be large symbol panels matched to a sound but an exercise a few later will be to speak this long complex sentence.

Have you ever considered usingshorter sentences for spoken exercises? I'm sure I would be learning better if I was understanding the sentence rather than a vague mimic of the sounds I just heard. At least having a 'repeat more slowly' button I might be able to separate sounds.

Just a thought. Thanks for the hard work getting this live though. It's VERY tough compared to other languages but quite a feat getting it live at all.

i agree with you and thank you

Give Duo some time...it's always getting better and adding those new features. But you're right, it would help a lot. Have a nice day!

There may well have been an A/B that is over: I just got listening exercises this morning for the first time in both Chinese and Japanese.

Could be an A/B test that's beginning ;)

At the moment, there is a speak slowly button, but it sounds a bit off. In French though, it doesn't exactly speak the words slower. It just increases the time in between words. I think that would be helpful here. I have been learning Chinese for a while now, but I CANNOT understand when someone speaks fast. Nor can I speak that fast.

I think Duolingo has these. now.

Some writing training would help too, please.