"You are very famous in this country."

I put "Tu estas muy famoso en este pais" - surely this is a potentially temporary state - but DL rejected it. Anybody else think this should be accepted? 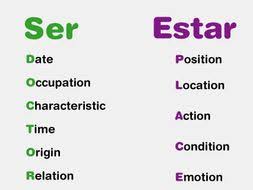 I know that it messes up the mnemonic, but it's better to think of "ser" in relation to QUALITIES, or perhaps INHERENT characteristics. I have seen people get tied into knots trying to figure out the difference between characteristics & conditions.

One mnemonic that really did help me: "For how you feel and where you are, always use the verb ESTAR." (Someone on Duo posted it a while back.)

Thanks for this mnemonic. I like it and it's helpful.

Fame is not a permanent trait, nor an inherent characteristic. I reported it and hope to get an appropriate response or at least an explanation

It helps me to think about "ser" versus "estar" this way: "ser" tells us who or what something is, it IDENTIFIES the subject. "Estar" tells us how something is.

Take these two sentences, for example:

With time and practice, we will be able to play around with "ser" and "estar" and use them to make subtle points about identity. For example, saying "José está famoso" probably makes a subtle dig at José -- yeah, he's famous NOW, but it will pass.

But the bottom line is that there is no handy explanation or guide that will give you the right answer every time. Spanish is a different language from English (or whatever your native language is) and it reflects a slightly different worldview. Or perhaps it reflects that in the fast paced US world of "reality TV," fame just isn't what it used to be.

So, if Duo or my Spanish professor tell me that MOST of the time, "fame" is considered part of the subject's identity, then I stop fighting and just accept it. At some point it's counterproductive to focus on subtle grammar points to the detriment of just immersing ourselves in the different world of Spanish.

Thank you for this illuminating commentary. The wonderful thing about learning a foreign language is the cultural immersion that happens, if we let it.

I think it should be accepted, but mine wasn't.

If you copy and paste the answer you tried into this discussion board, we can help you look for another error. You may not have one and it could be that Duo is just slow in incorporating this answer variant. But I've often found that putting the entire answer is very helpful.

Usted es muy famoso en este pais. Even with the missing accent on the "i", it was accepted on Apr 09/21.

why not 'usted esta muy famoso en este pias', for 'you are very famous in this country'?

I just wrote that, too (even with the accent on the 'a') and it's wrong? I wanted to be respectful with "usted". Thought I was being clever...

That should be accepted, too. I hope you reported it.

Seems to me that fame is fleeting - changeable, and therefore "estás" or "está" would be preferable to "eres" which is a permanent state. Many people find their 15 minutes of fame, and then are never heard from again. Why do you use "eres" here and not "estás"?

Generally estar is used for condition or location.

The temporary/permanent distinction is not a reliable guide.

Thanks! I needed the reminder about DOCTOR.

why famoso. why not famosa?

Like English, when in doubt, the Spanish default tends to the masculine. [I don't have to like it....] That said, if everything else in your translation was correct, "famosa" should have been accepted since we have no other information about "you." And JohnSGrubb says that this option was accepted a year ago.

And, if "famosa" was accepted a year ago, you have an error elsewhere in your sentence. Check carefully. I often have to look several times before I find my mistake.

What's the difference between "es" and "eres"?

"Eres" is the tú form, hence it is the familiar form.

"Es" is the third person form, and thus can go with he, she, or usted. (Even though "usted" means "you," it uses third person conjugations.) Thus, if you're being formal, you'd use "es."

Sometimes Duo says país has an accent and then sometimes he doesn't like pais.

País should always have an accent over the í.

Tu es instead of tu eres is wrong?

The verb "ser" is conjugated as follows:

Nosotros somos (we are)

Ellos son (they are)

I can't see anything wrong.

It should be. Report it.

You can also be plural so: ustedes están muy famosos en este pais ' should be a valid answer.

"Tú eres muy famosa en este país" should be accepted, no? That would be the correct syntax if one is speaking to a woman?

Looks good to me. Did you report?

I did, I just wanted to make sure. Thanks!

According to previous posts, "famosa" is/has been accepted.

That would be "much famous" instead of "very famous" ("muy" = very). "Mucho" can be used as either an adjective or an adverb, but I didn't find anywhere that said that it could mean "very." Here's a link to the SpanishDict entry for "mucho": https://www.spanishdict.com/translate/mucho

Earlier in the course Duolingo differentiated between “tú” and “usted”; that the former was more for those known to or close to the speaker, and the latter was was those less familiar or perhaps deserving of respect... so why is “usted” rejected in favour of “tú”? Help please.

It seems that you aren't the only person with this question. You just have to double-check that everything else in your answer is correct and then report it. Sometimes it takes time, but Duo does eventually allow variations on its model answer.

As to why Duo's default seems to be "tú" over "Ud.," I think that's just reflecting gradually shifting cultural norms in many Spanish speaking countries. Who knows, in a 100 years maybe the "Ud." form will be as archaic as "thou" is in English.

Many thanks for your reply.

According to other posts here, "famosA" is accepted. Your error must have been elsewhere.

Why is "usted es muy famoso..." not accepted?

Sentences including that phrase are indeed accepted, so there must have been an error elsewhere.

If everything else in your sentence is correct, it SHOULD be. That's when you report your answer so that the Duo Gods can add that variation into the data base.

Please paste your ENTIRE answer as experience has shown that often what THINK was wrong was not the issue -- there was some other little error that we couldn't see because it's difficult to proof your own work (especially in another language.)

Why is "tu eres mas famoso del pais" wrong? Can someone give me advice?

I got it wrong and it said the answer was tu eres....

Go with your first "guess." I've highlighted the word "guess" because we often discount our first answer and think of it as a guess because we don't realize that we know/have learned more than we thought. What's the worst that can happen? You get it wrong. On the flip side, trying to be perfect and going back and forth and second guessing yourself actually DIMINISHES the strength of your first "guess."

I've been taking my own advice and just going with my first answer. It's actually liberating to not feel the pressure to be perfect. Amazingly, I've been getting more answers correct!

You can report this. Duolingo is pretty great about updating accepted answers if you give them feedback. But you will need to use the Report option instead of the Discussion one.

If your stuck use the tips under the words. Duolingo sets you up for a fail. A poor teaching method

Remember, the mini-lessons for each circle CANNOT and are not intended to teach you everything that you need to know. Rather, the process of doing the "quizzes" is the vehicle of greatest learning. I have worked to get over the training from my earlier education system in which I got mad/frustrated when I got a question "wrong" on the "quiz" because the Duolingo quizzes are not intended to TEST; they are intended to TEACH, much as our parents did when they corrected us when we learned our first language. In fact, it's better to think of the quizzes as EXERCISES so that they don't carry the emotional component that the word "quiz" or "test" does.

And you're right: the "hover hints" are very generic -- they are not focused on each question/problem, so very often they are not all that helpful. But again, it's not part of a plot to "set you up for a fail." They are just an added, potentially helpful source of additional information.