Translation:I stayed there for four weeks.

I may be wrong, but I was taught that, in both German speech and writing, "time" ALWAYS precedes "place."

Time usually precedes location, but not always. There are various reasons to change the order. For example, when you're talking, you might not think to mention the time aspect until after you've already mentioned the location. Or you might choose to place vocal emphasis on "vier Wochen", in which case having it at the end of a sentence may add to the emphasis.

I think it's because "da" is not a specific place and acts more like a pronoun. I would think "Ich blieb für vier Wochen da" sounds a bit awkward, no?

I disagree. If you want to say, "I'll be there in two minutes", it's perfectly fine with "Ich bin in zwei Minuten da". Doesn't sound awkward at all.

I don't know if HashishShetty is a native German speaker or not, but his comment about "da" rings true. Click on this:

for several examples of it.

Isn't da usually used for "here" and dort for "there"? If not, how can you tell the difference between when da is supposed to be here or there? Thanks

"Da" can be anywhere, here or there, so it depends on the context. It refers to wherever the speaker is pointing to or talking about. "Dort" most definitely means "over there," however. Likewise, "hier" would always mean "here."

Couldn't this also mean "I stayed here for 4 weeks." also then?

Technically, it could. Most likely, the speaker is referring to somewhere that is not "here." Otherwise, they would have used "hier" in that case to be more clear. Again, it all depends on the context and where the speaker is referring to. "Da" could mean "here" when, for example, you're on the phone with someone and they ask, "Ist X da?" (Is so-and-so here?). Here's another example: My German professor would always take roll by looking throughout the classroom and saying "(Student) ist da... (Student) ist da.." and so on. So "da" can mean "here and present" as well.

I am not exactly an expert on the subtle nuances between hier, da, and dort, but I came across this thread on German Stack Exchange:

So, that means that we can also say (in this case) the time first and it would be aldo correct if we write the location afrer or befire? Thanks

I don't want to throw a monkey wrench into this discussion, but while trying to find something that supported what you've written, I came across this page:

WHAT IS THE DIFFERENCE BETWEEN “SEIT” AND “FÜR” IN GERMAN?

In this excerpt from the page:

The preposition “für” in German also means “for” in a timely manner. However, we use it in a different sense. If you use “für”, you would like to express that something has started and finished....

For example: “Ich habe für 2 Tage in der Firma gearbeitet.” – (I worked in the company for two days.)

As shown in our example, the action of work has a start and an end. I stopped working at some point and do not do it anymore in this moment.

it directly contradicts what you have written.

Incidentally, the person who wrote the page "WHAT IS THE DIFFERENCE BETWEEN 'SEIT' AND 'FÜR' ..." is a woman named Stephanie who has been teaching German for what is now likely to be 10 years at least. On her "About me" page she writes:

my qualification as a German teacher is certified and internationally approved by the “Goethe Institut.

I still don't know if she is a native German speaker, but she clearly appears to have credentials that would indicate she knows what she's talking about. How would you square the comments you posted in this thread with hers and whether you can or can't, could you point us to some sort of authoritative reference that supports what you've posted?

Curiosity got the better of me so I decided to compare stayed for four weeks to stayed four weeks in English, using Google's Ngram. This is what came of it: 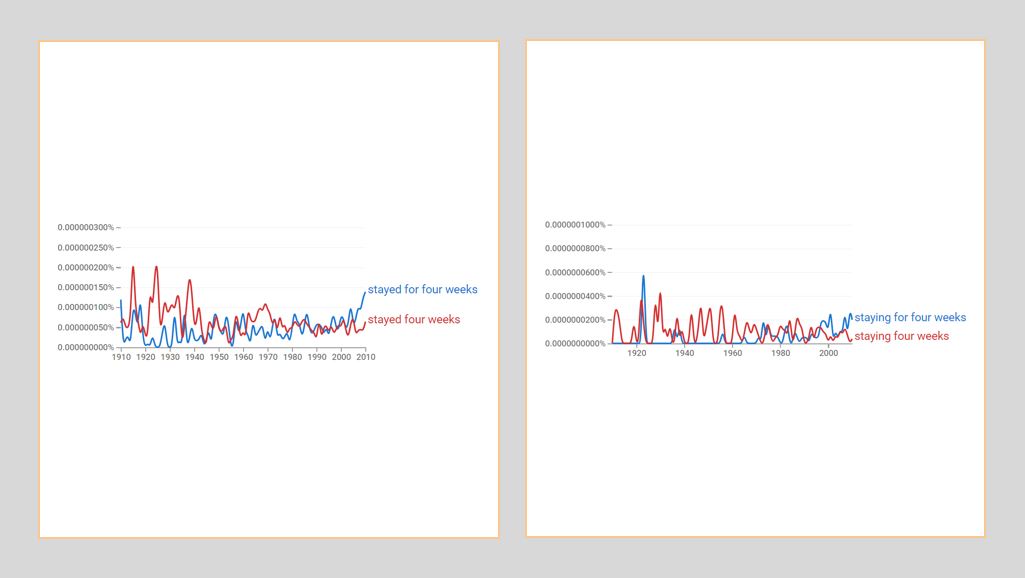 To enlarge the image, bring it up in Chrome, right click it, then open the image in a new tab.

As you can see, English clearly favors using "for" before the time period. German, on the other hand, does not: 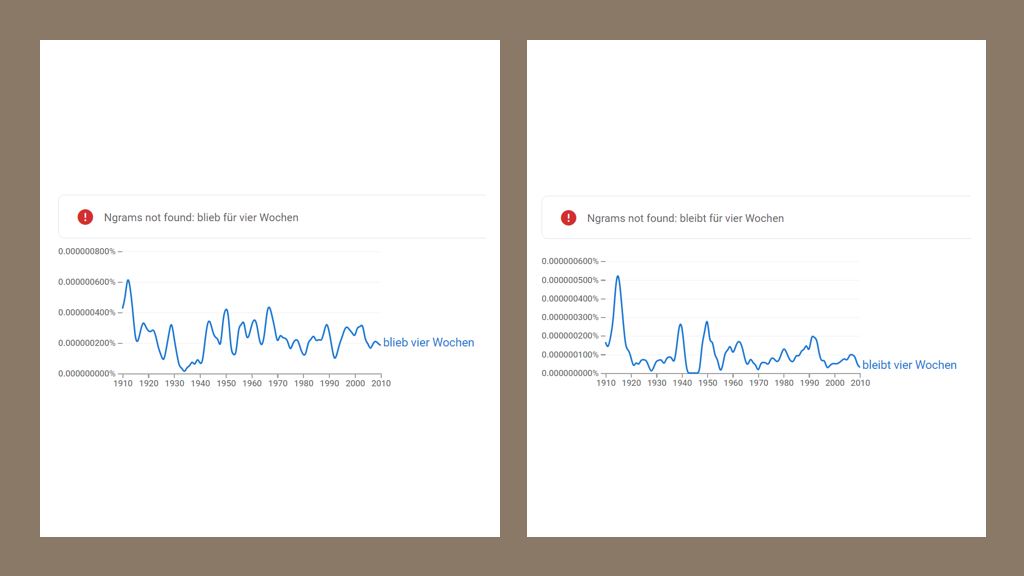 To enlarge the image, bring it up in Chrome, right click it, then open the image in a new tab.

whether or not you're talking about the past or the future.

Is
I lived there for four weeks.
wrong?

Wrong, because the verb is "bleiben" meaning "to stay". "To live" would be "wohnen".

I thought da could mean either "here" or "there". Why is it incorrect when I used "here"?

I'm not a native German speaker, but when I think of da meaning "here", I only think of objects that are very close to you, such as "Die Flasche ist da (auf dem Tisch)" would be "The bottle is here (on the table)". In that case here or there would work in that sentence because you are supposedly very close to the table. I don't think I would ever use da to mean "here, the place where I am", especially not for a city; for that I would always use hier. I wonder if any native Germans can weigh in?

Is it ok to say "für vier Wochen"? I was under impression one has to use seit, not für.

Seit is normally used when you are still there--Ich warte seit zwei Stunden. I think this sentence should be Ich blieb vier Wochen da.

Sorry, nichts ist klar! Quotes from your post are highlighted below.

You use "seit" when you are still there. This sentence is correct. It doesn't matter whether the action or state of being started ten minutes or three centuries ago. If it is still ongoing, the verb will be in the present tense, and the time expression may take seit, but certainly not für.

If you went there four weeks ago, and you are still there, you say "Ich blieb da für vier Wochen . . . " This is incorrect (and, incidentally, contradicts what you said in the first sentence I highlighted). Ich bin seit vier Wochen da would be better.

. . . if you visited that place a few years ago and you're telling your stories to a group of people, then you say "für vier Wochen." It would be better to leave out für and say simply Ich war vier Wochen in Berlin.

Für is one way to express a span of time in the future: "Ich fahre für eine Woche nach Berlin," although I would probably use auf.

Actually, one of the original questions was the order of adverbial phrases, and I agree with Vaarlam--Time Manner Place is the usual order. That's why I changed the word order in the example you gave. This may be some sort of exception because da is such a tiny easily-overlooked word, but I doubt it. It definitely sounds wrong the way it's written.

The other question was the use of für, and most of us who know German seem to agree that the sentence would be improved by omitting für.

I believe the consensus is that the given sentence is awkward and unidiomatic; Ich blieb vier Wochen da sounds better and does not violate grammar rules.

Feel free to ask if this is still not clear to you.

Yes.i think für should not be used.We dont use für for time , right?

Yes.i think für should not be used.We dont use für for time , right?

für should not be used here for time,right? because thats what i have learned.

I was told to never use für with a reference to time, so I'm confused too.

Für and auf are often used for time expressions in the future: (I'm going to New York for a week.) I don't know if one is preferable to the other. I generally say auf, but I've heard für as well.

In this sentence, I think it would be better to omit für entirely.

In colloquial English, it isn't incorrect to omit the preposition "for". So, "I stayed there four weeks" should be accepted as grammatically correct.

I'm pretty sure one can say, ich blieb vier Wochen da! But going back to the original question why isn't da at the end if it is time manner place, I often see da and hier used awfully early in a sentence and am not sure why

the hint says "vier Wochen" means "months," is that true?

ooooh hahaha four weeks is same as one month, haha how did i not notice that. dang i sound so dumb now haha. thank you.

If I want to say "I will stay" can I just add werde between Ich and bleib?

Not quite. You would conjugate "werden" to match the subject, use the infinitive form of "bleiben", and move "bleiben" to the end of the clause. Here's an example:

Is it incorrect to say "I stayed for four weeks there"

true, it really sounds a little like "dafür". Maybe "da" should be changed to "dort" :)

It sounds wrong with für, I agree.

Für is incorrect,there should not be any preposition here.

I would agree with you.

Recently we had a sentence: bitte bleib, or bitte blieb, not sure which.. This was translated as please stay. My question is, if this is the same word, or not. And if so, does this mean it is present and past tense also?

They are from the same verb 'bleiben' meaning "to stay, to remain". Because it is what linguists call a 'strong verb', the stem vowel (here, 'ei') changes to mark the past tense.

Thus, the imperative in that other exercise was bleib, stay, while the past is blieb, stayed. (Thus the past participle will also show this sound change: geblieben) You can see the full conjugation at Wiktionary, among other sources.

Can't you say "I was there for four weeks"?

Is that not true?