What in the world is that a picture of?

Since the launching of the new Spanish tree this last weekend, I've been making my way through the plethora of new Purple/Level 0 lessons, all of which utilize images as part of their lessons.

I've begun to screenshot some of the bizarre and hilarious photos that have cropped up which ultimately confuse rather than assist. 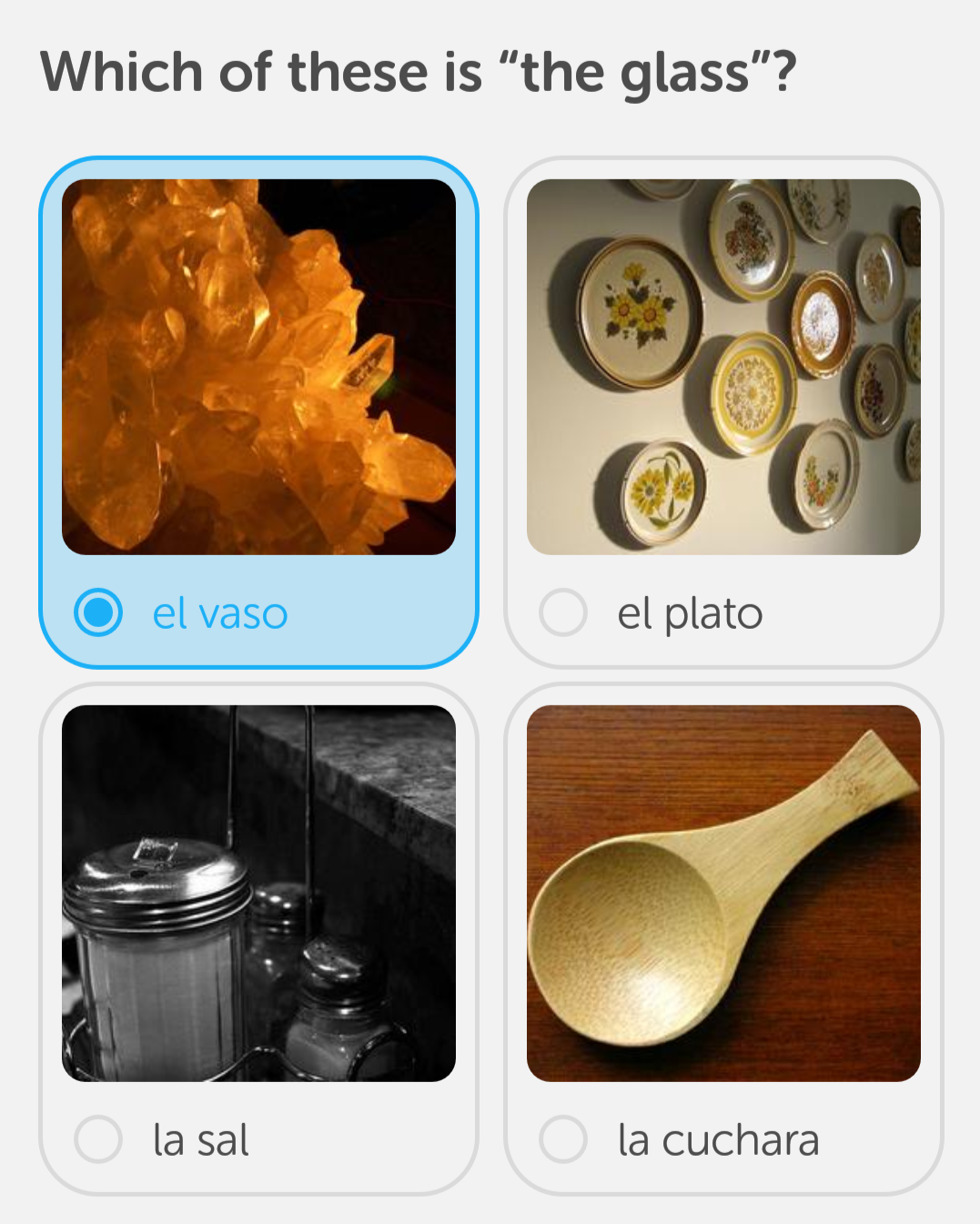 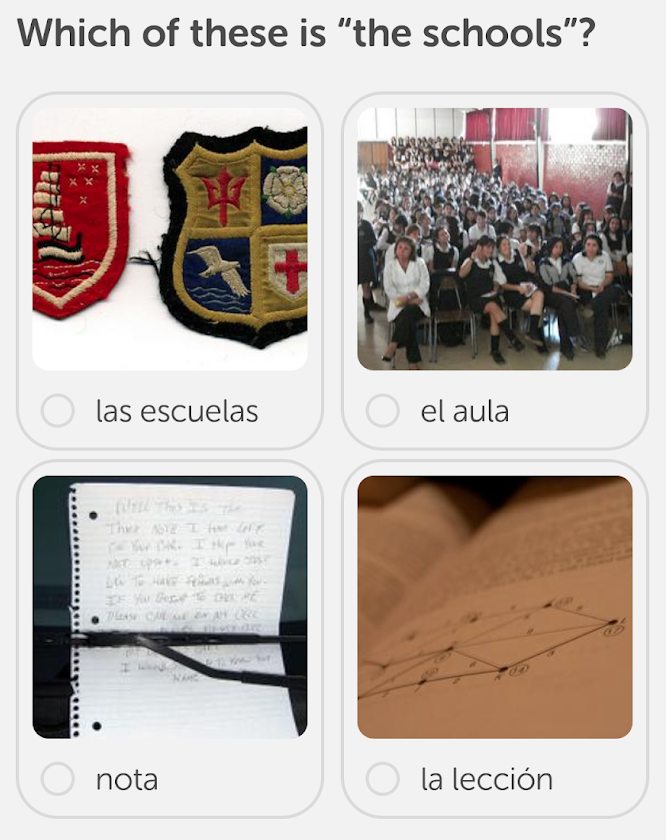 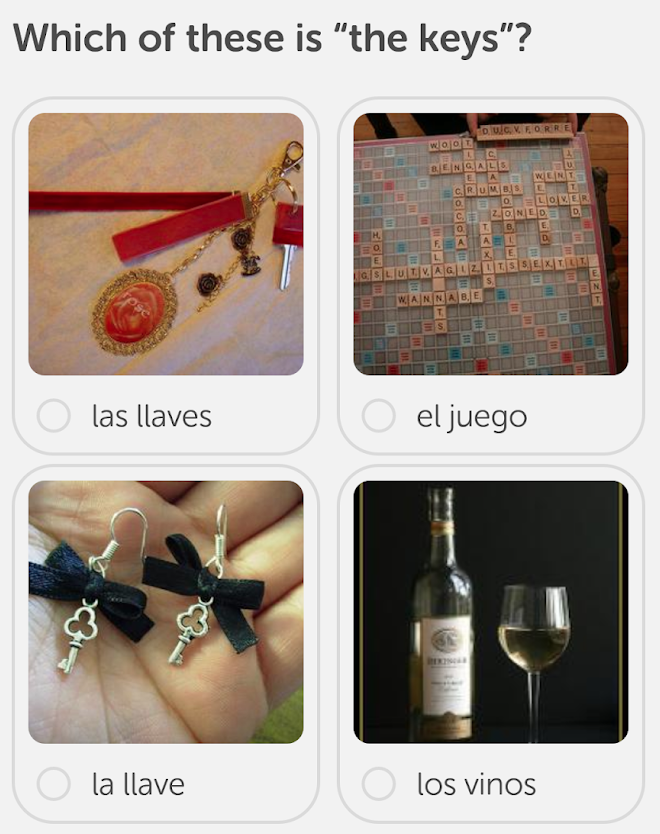 Let's forget the fact that the keychain bobbles make the KEY aspect of the first image nearly indistinguishable, and the second key image is technically earrings... - la llave (singular, the key) -> two keys are showing. - las llaves (plural, the keys)-> one key is showing. 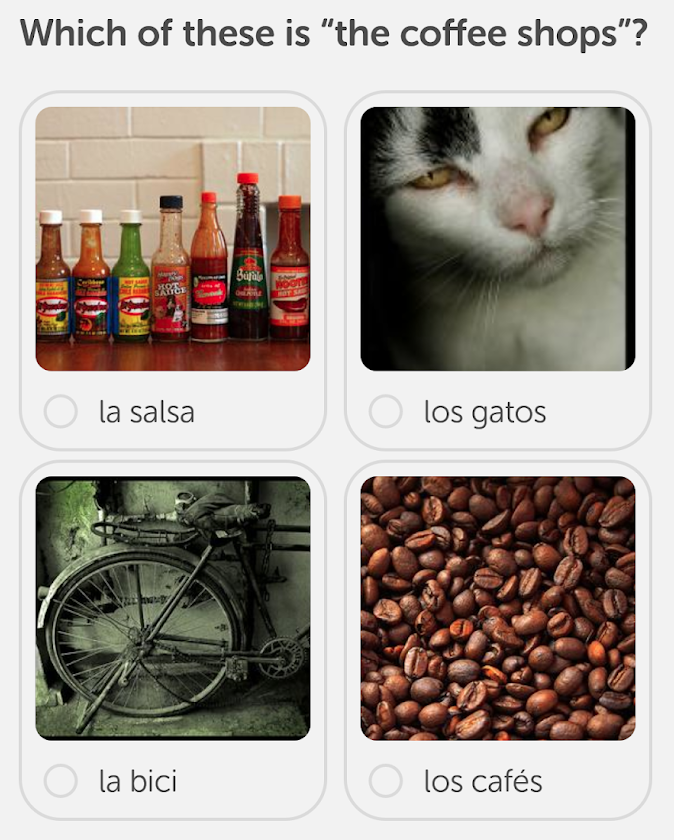 Try to ignore the [singular] demonic looking cat for los gatos (the cats), and focus on the coffee beans which are supposed to somehow represent a coffee shop.

Where on earth are they getting these images??

In Vietnamese, there were some idk pictures.

"a bee" -- flower garden
"umbrella" -- rain, that droplets of rain you watch from the window of your family's car, pretending that was a droplet race.

Where am I supposed to find the bee there (ong)? It is like finding a needle in a haystack from a distance.

And, here, in the French tree.

You were probably too slow; the clouds have already covered the star! :)

~ Which of these is "the glass"? -->"el vaso" had a picture of rock crystals. Could it have been fake crystals made from glass? but even then isn't vaso for a drinking glass, not just glass in general?

Every now and then I get random images. Like it would be a picture of 3 politicians i assume signing a document, the word i think was constitution.

I just guess and hope i dont get that image again.

I just uploaded the screenshot... definitely not fake crystals made of glass. Hahaha

And are those plates on a wall?

Yahh, and it says el plato

This is just like when I had the word "letter" and Duolingo showed me a picture of the alphabet with a caption "la carta" (and this was in the old Duolingo).

I think maybe they can still do something to fix this if you post this under (or move this post to) Troubleshooting.

While practicing my basics 1 in German awhile back when the trees got changed to crowns, I had to find ''the boy''. In two of the pictures were boys. I was going fast since I already knew all of it and just clicked the first one I saw. I got it wrong. I was annoyed when I realized it was because the one I clicked on was ''the child''. I reported it to duolingo and, since then, I am happy to report, it has never come up the same!! :)

They look like quarts crystals, essentially sodium silicate, a major component of glass, but who knows that?

The person who chose the photo?

I think like the stories they should potentially have people do photo submissions. I suspect they get these photos from some sort of random search. I'd be more than happy to take a bunch of photos for DuoLingo, at least of inanimate objects.

Sure, Duolingo may get their photos from some random search, but hey, how hard could it be to get a decent photo of, say, an umbrella through that search?

Lol. There have been a few times where I find myself asking my daughter to help me discern what is what and we both have a fun laugh. About the glass picture, That's not glass, that's kryptonite. If for nothing else, we have a great laugh.

Mr. Owl boi needs to stop experimenting. Not gonna lie these are hilarious.

Can you report them?

I wonder if Duo is experimenting with AI in the same way they're doing translation, or transliteration? Many of the sentences were clearly not constructed by a bilingual human being. Duo's original idea was to translate the web, or integrate translation with language learning.

I wonder if these images are static, or chosen randomly from a bank of tagged images. Clearly the glass isn't a drinking glass, and the salt, pepper and sugar picture contains salt, but salt isn't the focus.

It's also apparent that many of the sentences in the new purple groups haven't been checked, and that part of the process is us, the users, flagging "my answer is correct" and other errors until Duo finally gets it right.

I'm just inclined to believe that some of this is auto-generated content, rather than static content chosen by a human.

lol hahaha :) :) I get some weird pictures too sometimes...