What's the difference between este and ese?

este = this... ese = that. Both are masculine... I always have a hard time with demonstratives. If I have to really think about it I just remember, "This and These have T's"

Now the next question is how to remember which corresponds with which haha... I'd appreciate it if anyone has any helpful tricks for recalling that este = this / ese = that!

I've often contrived complicated memory tricks for stuff like this. The utility of them depends on how many mental hoops you like to jump through while trying to remember, and just how your own brain works.

For this one I just note that the word "this" has a single "t" and "that" has two. So, if the letters are said to cancel each other, then two "t"s make none, just like" ese" has none. However, the corresponding Spanish word for "this" also has only one "t" since there isn't another to cancel it.

Should be easy to remember because this is este..one T.and that ..think easy _ or ese..hope helps !

One way I try to remember it is that "ese" is also a term for friend, so este is this here with me. Ese is that over there with my friend.

This is really helpful

Este it's this and ese is that

So esto is the same as eso? Used when you don't know whether something is masculine or feminine?

Im confused with ese abd eso. When do I use which?

Eso is a neuter (or neutral) pronoun. It can't be used as an adjective before a noun. It can refer to and stand for something undefined, a situation, a circumstance (¡Eso es horrible! That is horrible!) or it can be used when you can't tell what an object's gender is (¿Qué es eso? What is that?).

Whats the difference between que and ese?

Though I'm by no means an expert, experience dictates that "que" as that usually refers to that being used differently than "ese", which is either a pronoun or goes before a noun. An example of the former would be: "I'm running so that I can make it to class on time."

Que means what. Ese means that.

Why is aquello wrong? Should it be aquel?

Yes, aquel sombrero should work here, but its use does depend on context (which we do not know here, of course). Note that before a singular masculine noun it is aquel (not aquello) but before a singular feminine noun aquella. I believe it is used infrequently.

According to this ThoughtCo article¹, aquel/aquella means "that" but refers:

to entities that are further away in time, distance, or emotional sentiment [from the speaker]…

than would be indicated by using ese.

So, perhaps if you are discussing a hat you saw previously somewhere in a shop in town then you might say
Yo quiero aquel sombrero.

Aquel/la used directly before a noun is an adjective (pointing to or indicating a particular entity). It has four forms:
That » aquel, aquella
Those » aquellos, aquellas.

ALL the singular forms that end in -o are neuter pronouns only:
esto, eso, aquello

As aquello is a neuter demonstrative pronoun² it CANNOT be used directly before a noun but is used stand-alone, representing an unidentified or unknown noun or to refer to a concept, or idea. The other two neuter pronouns, esto and eso, function in the same way - none of these are masculine.

Why wasn't aquello sombrero correct? I thought aquello and eso were interchangable.

KellyLined, you cannot use esto, eso or aquello before a noun because they are all pronouns. The masculine demonstrative adjectives that you can use before a masculine noun are este, ese and aquel.

That helps! Thanks! So eso and aquello are interchangeable?

English has only the two singular neuter demonstrative pronouns "this" and "that". Bear in mind that the purpose of pronouns is to avoid having to repeat the full names of things being discussed ¹. Spanish has the two forms for "that", but they are used in a discussion to refer two different objects so in that sense are not quite interchangeable. I believe aquello is not frequently used.

To use an example: I am the speaker so I set the references as part of our conversation because meaning is relative (very close, near and further away from ME). In doing this I would use esto for an object I am holding (as an example); eso for something on the table nearby; and aquello for something perhaps in a store (assuming we are discussing three things). It then saves both of us repeating a description of (or pointing to) the three things as we are talking about.

¹ Note: The singular -o suffixes are neuter, so I think it would be a little unusual to use all three in a discussion because, by definition, neuter means you can't identify the items so you can't name them (if you did they would have gender).

This is rather contrived, but perhaps you could say something like "What is this (esto)? That (eso) on the table is the same thing. Are they the same as that ( aquello) we saw in the store?" I'm guessing that it is more usual just to use esto or eso by themselves: ¿Qué es eso? (on the table) or ¿Qué es esto? (in my hand).
ℒ

One more thing. For feminine adjectives, it would be esta, esa, and aquella?

Yes, that is correct. And they take the same form when used as pronouns (Esta es bonita - referring to una falda) and when used as adjectives (Esta falda es bonita).

In another forum discussion I have a table of demonstratives https://forum.duolingo.com/comment/27993008?comment_id=31386940

how do you know which one to use (esta or ese)?

Difference between eso and ese? Does "eso" even exist?

Yes, eso does exist but cannot be used before a noun.

¹Note: There is an interesting example in one of the Duolingo stories where the neuter pronoun is used also to refer to mistaken identity: salt was mistaken for sugar and put into a cup of coffee:
¡Eso es sal! ¡No es azúcar! "That is salt! It isn't sugar!" Sal is a feminine noun.

Why there is no article un sombtero? Thank you:)

This has nothing to do with this sentence, but what is the difference between su, tu, tú, and usted? I'm really confused. Is usted even a word?!?

Tú and usted are pronouns meaning "you" in English. Spanish actually has five pronouns for "you": this Spanish Dictionary article¹ explains them.

Su and tu are possessive adjectives used to define which object you are referencing (eg, her car, your house). This Spanish Dictionary article² should help you.

why not "quiero ese sombrero"

What's the difference between ese and eso?

because sombrero is masculine, so it takes ese

me quiero = "I want me" so the sentence would translate as:
"I want me that hat"

In English, I would understand that, and I'm sure I've heard that type of speaking, but it's not really correct.

I don't know what native Spanish speakers would make of "me quiero ese sombrero" so I hope someone sees this and advises us.

danysalvatore, querer also means "to love, to show affection for" - it takes this meaning when a person or animal is a direct object, so no I don't think me quiero (I love myself!) will work here.

I think perhaps your confusion (?) maybe is with Me quito el sombrero » "I take off my hat" (quito: from the reflexive verb quitarse which when used before an article of clothing means "to remove, to take off").
ℒ

(Just asking the people whose mother tongue is Spanish if there are any ) Is this course useful if i want to have a day to day conversation with a Spanish speaker ? Like the course is really teaching really nicely . But i want to know the authenticity in daily life . As we know that in almost all languages what we are taught in language in school can be different to our daily conversation.

what is the difference between ese and aquella

Whag is the difference between perro and pero

Hint: You can look this stuff up yourself. Here is a link to an online bilingual dictionary:
https://www.spanishdict.com/

I found it useful to keep this to hand: 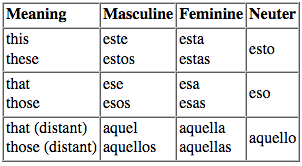 The neuter forms are only used when the gender of the thing is unknown.

Thank you! I also learned that "eso" is a pronoun, not an adjective, which was also helpful! :) Have a blessed day!

They are all adjectives and pronouns.

"That shirt is red. I want this one."
"esa camisa es roja. Yo quiero esta"

Why isn't it "eso sombrero"

Because 'sombrero' is masculine

This graphic may be useful:

This graphic may be useful:

Thought this might be helpful to someone because I struggled with este vs ese. I use the phrase "this or that" sometimes. So, to remember, I say "este o ese" and it triggers the distinction for me. Hope that helps someone.