"They are eating rice with chicken."

This was not a spoken question, but a request to write a translation. I wrote "ellos" because there is no way I can tell from just "they" whether it's female or general.

I agree with you it would seem impossible to determine the feminine form in this case. It's seems that sometimes Duolingo wants you to be a little bit Clairvoyant. But then again what do you want free

I have the same question with the word 'comen'-why not 'coman'?

Why are you asking about using "coman"?

Perhaps you're thinking verbs are conjugated to agree with the subject's gender? Fortunately, that's one thing you never have to worry about when conjugating verbs. On the other hand, you do need to pay attention to number, person, aspect, mood, and tense. :)

thank you very much yhay helps a lot

Comen is third person plural (normal present tense) for all forms of "they", whether it's female or male. Coman is a completely different form of the verb that is not appropriate here.

To go into more detail for other people reading this, verb conjugation patterns depend on what their infinitive suffixes are. Regular verbs conjugate like this: 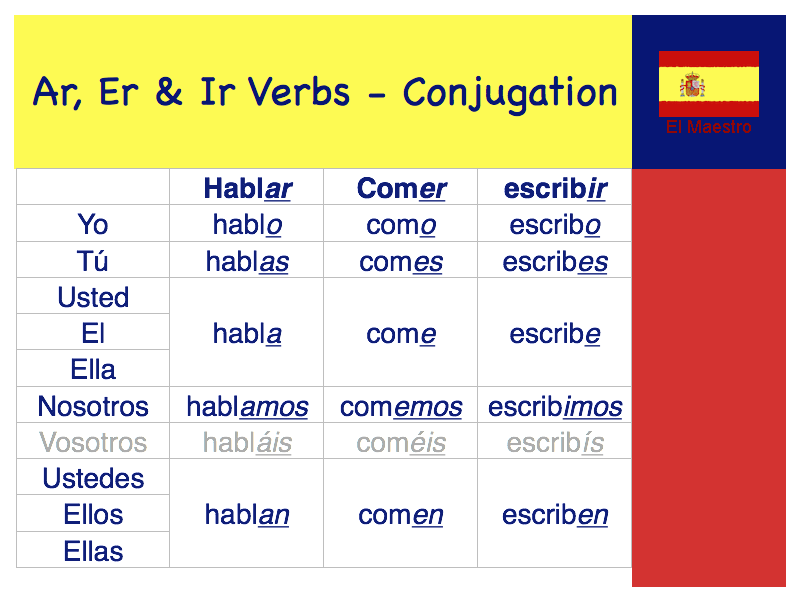 Since comer is a regular -er verb, the stem vowel is E in the present indicative. "Coman" exists, but it's the subjunctive and imperative form.

Either ellos or ellas is accepted. Perhaps there wad a spelling error elsewhere?

Only the verb form was asked for. Ellas was already there.

Why ellas and not ellos?

Yes, why not ellos?

You have to listen to the speaker to hear if they say 'ellas' or 'ellos'. It may not matter otherwise.

This was not a listening exercise it was only in written in English to translate to Spainish and “they”can be ellos or ellas. So your reply is incorrect.

I just heard the same question as a listening exercise, not a writing exercise, and the comments button brought me here. So that reply was not incorrect. Be nice.

Agreed, but I think the comments should be split between those that had different experiences. Duolingo switches up how lessons are implemented, that results in people identifying issues for them that don't make sense for others.

"Estan comiendo arroz con pollo" should be accepted, no? I'd assume since this is from the revamped skill tree, the present progressive tense in spanish isn't introduced yet so these answers are marked incorrect? From people who are recompleting the tree this should have been addressed.

This is a good question and many people have had translations with the present progressive rejected here. Given the lack of context, it isn't technically wrong to translate with "están comiendo," but it isn't as commonly used in Spanish as it is in English.

It's possible Duo has not added these to the database for this drill, but it's also possible they never will. It seems the wise owl is trying to break our English speaking habit of using the progressive when it isn't called for in Spanish.

In Spanish, the use of the progressive aspect is usually reserved for describing actions that are happening in the moment and even then, you use the progressive only to emphasize that fact. It's also sometimes used to describe the present instance of routine, habitual behaviors. Otherwise, the simple present is sufficient.

But what if they are eating rice with chicken, right now.

Well, that's a situation where the progressive would make perfect sense to use. As I noted before, it's not technically wrong. So, one certainly could translate Duo's sentence with "están comiendo."

I wrote exactly that and it got accepted now

Don't try to match the present tense and present progressive one-to-one between English and Spanish. They are not used the same way in the two languages.

Mimi, it's because "son" is a conjunction of "ser" and you need to use "estar" (están) in this circumstance. Also, you would need to use "comiendo" rather than "comen".

That isn't quite right.

To form the progressive, you need to conjugate the verb "estar" and add the relevant gerundio (the verb form ending in -ndo). The thing is that Spanish uses the progressive tenses in a lot fewer situations than English. For example, it's never used to talk about the near future. Instead, Spanish often uses the simple present. So, it only looks like "comen" = "are eating" because we've substituted our present progressive for their simple present.

In addition, you can use "ser" with the past participle of the relevant verb for passive voice constructions. So, for example, "was written" = "fue escrito." Although Spanish tends to avoid the passive voice compared to English, that's not because the "to be" part is built-in.

How do we know when to leave out "son"? I wrote "Ellas son comen arroz con pollo" but they took out the "son"

The verb to conjugate here would be Estar not Ser. So, "estan comiendo arroz con pollo" would be the way to say that. It took that for me.

Not sure when to use comen or comemos

Comen is the conjugation for ellos/ellas and ustedes, so it can mean they are eating or you (plural) are eating.

Comemos is used with nosotros/nosotras, so it can mean only we are eating.

You can say that, but it's not what's being said here. If you say "they are eating the chicken and rice," it implies a specific dish. Likewise for the Spanish.

They = ellos/ellas
You (plural) = ustedes

Why is there no "son" after Ellas?

If we want to highlight that they are in the middle of eating right now, we could say "están comiendo". The progressive uses "estar", not "ser" and you need the participle form. After all, it's not "He is eats" but rather "He is eating".

is ellos masculine, while ellas is feminine?

Ellas is feminine. Ellos is masculine, or mixed group, or unclear/undefined. When Ellas is used, you know for certain that they're talking about females only.

I thought comemos was used in a multi person setting?

"Comemos" is specifically "we eat".

Wouldnt it be "they eat rice and chicken" not they are "eating"? If it is "eating" why is this a better translation than "ellas estan comiendo arroz con pollo"?

Spanish does not use the progressive the same way we do in English. 95% of the time, "comen" can be either "they eat" or "they are eating" and vice-versa. In Spanish, "están comiendo" is reserved for highlighting that they are in the middle of eating right now. It can never be used to suggest a future activity the way it can in English.

+1 how would you know if it is feminine or masculine?

I feels that "Nosotros estamos comemos arroz con pollos?" Isnt that the plural form they were just focusing on in this lesson?!

"el" is not needed in this sentence.

Ellos or ellas is accepted. Perhaps there was an error elsewhere?

Can please Duolingo change this voice? It's not understandable and very annoying. Thanks a lot!

"Comen" can translate as "they eat" or "they are eating". Spanish does not have the same distinctions that English does. If you really want to emphasize that they are in the middle of eating right now, so please don't call during dinner, you can say "están comiendo".

I thought you are supposed to use el or la before a noun always.

No, that's not correct. Spanish does use the article more often than English, but it's certainly not "always".

whats the difference between ellas and ellos? whats the rule..its not clear at all

Ellas means "they" when it is a group of all women or girls.

Ellos means "they" when it is a group of men or boys, or a mixed group of genders.

I answered "Ellos son comen arroz con pollo." Can anyone tell why should i not put "son" here?

One, the verb comen by itself can mean "they eat" or "they are eating". Spanish is more flexible in this sense in that the regular present tense can translate to multiple ways to say it in English; you don't need to translate the "are" as well.

Why can't it be: ellos son comiendo arroz con pollo

Because that means "they are (something called) 'comiendo arroz con pollo'." To form the progressive, use "estar" not "ser."

How do we know whether "they" are male or female? Both ellos and ellas could be correct.

Yes, and it's been reported that both ellos and ellas are accepted as long as the rest of the sentence is correct.

The gender is not always clear like in the sentence Ellas comen arroz con pollo. Why is it Ellas and not Ellos. I thought if the gender is not clear you use the masculing pronoun.

Both ellos and ellas are accepted, as well as no pronoun at all.

Why not 'ustedes' for 'they', instead of 'ellas'. Here the gender is not indicated.

Ustedes does not mean "they". It means "you" (plural).

Wasn't there another combination of foods that was "X with Y" in English but "X y Y" in Spanish? Are these pairs just things that have to be learned through experience and memory rather than any pattern? Tried the "X y Y" here and it clearly isn't one of those pairs. Thx

Ellos or ellas? Both should be correct?

I agree, either "ellos" or "ellas" is correct

It says they are... Why not Ellos son, why just ellos?

The verb comen, just like other present tense verbs, can mean "they eat" or "they are eating". There's no need to also include another "is/are" verb.

I get confused about when to put el/la in front of the object. Why is there no el in front of "arroz con pollo"?

The subject of when and when not to use the article can get very complex in Spanish and a full discussion of it can run into multiple pages in grammar books. However, in this case it's simply for the same reason that we don't use it in English: We are not talking about a specific "rice with chicken", but rather "some" rice with chicken.

I got options to tap and I wrote as follows.

I do not understand differnce between "comAn" & "comEn". Do verbs have gender? or option was there to confuse learners?

No, verbs don't have genders in Spanish.

The correct form here is comen.

You're correct as far as the indicative is concerned, but "coman" is the form for both the subjunctive and imperative moods.

So basically that option of 'coman' was to confuse learners. Thanks you.

No, it's to test whether you recognize the difference between conjugations in different moods. Sometimes it's easy to simply guess the correct words without having a good understanding of them. Presenting you with closer choices forces you to exercise your knowledge of the language.

I don't think Duo does anything intentionally to confuse us. Learning a new language can be confusing enough without that. :)

It cudve also been allos

I wrote: "Ustedes comen arroz con pollo" for my answer but it was marked wrong. Why?

Ellas/ellos = They
Ustedes = you (plural)
Your sentence means "You are eating rice with chicken."

Strange wording. In English, we say chicken with rice rather than rice with chicken.

If you've seen arroz con pollo, you know that it's a rice dish with chicken in it. Not strange at all.

"Arroz con pollo" is the dish we call "chicken and rice".

"Ellos comen arroz con los pollos" means that they are sitting somewhere with a bunch of chickens surrounding them while they eat rice. They are eating rice with the chickens.