I reported that "Often the weather is bad here" should be correct.

Not great english but I did the same thing. Sometimes when I use good english it is marked wrong because it's in the wrong order but on the whole it is still a good learning tool.

Johnnie, it's difficult for anyone to help you because we can't see your answer on the answer page. If you will copy and paste your answer into your post, another learner will be happy to help you figure out what went wrong. It may just be that your answer was correct but not yet in the database.

Why would it be incorrect to say "Often it is bad weather here ?"

why is "often it's bad weather here" wrong

It is often bad weather here could also be correct

I am beginning to wonder if native English speakers are doing the translations.

I can understand the Spanish, but the English translations are horrible and correct ones are counted wrong.

Since "hacer" is "to make", wouldn't it be something like "bad weather is often made here"?

Hace can also be translated as "It is". Hope that helps. :)

Why is " it's often bad weather here" not accepted??

Often the weather is bad here. counted as incorrect. Really. It begins with "often"

Spanish often reverses the order of things. You have probably already learned about adjective placement, so you have one example of this already. For example, we say/write:

but in Spanish, we say/write:

The same can be true for other parts of speech. The phrase a menudo is an adverb. Adverbs that modify an action verb are typically placed behind the action verb in Spanish. For example:

we can come up with at least three different variations in English, but keep in mind that adverb placement, especially in an English sentence, affects the meaning of the sentence. For example:

The weather is bad here often.
Answers the question: Where is the weather typically bad?

English typically places the most important information in a sentence at the end and serves as a clue to what type of question may have preceded it (if the statement is in response to someone who has asked a question).

In general, English likes to place adverbs of time toward the end, but both English and Spanish (especially Spanish) are flexible with adverb placement), so I don't want to give you any rules about this other than the ones you will find on this page here:

I do want to show you how adverb placement applies to the sentence for this Duolingo exercise because I think the crux of your question / comment is How do I know where to place the adverb when translating from Spanish into English? It is a complicated topic, but let me attempt to address it with a chart. The chart below are variations on A menudo hace mal tiempo aquí from the machine translator DeepL: 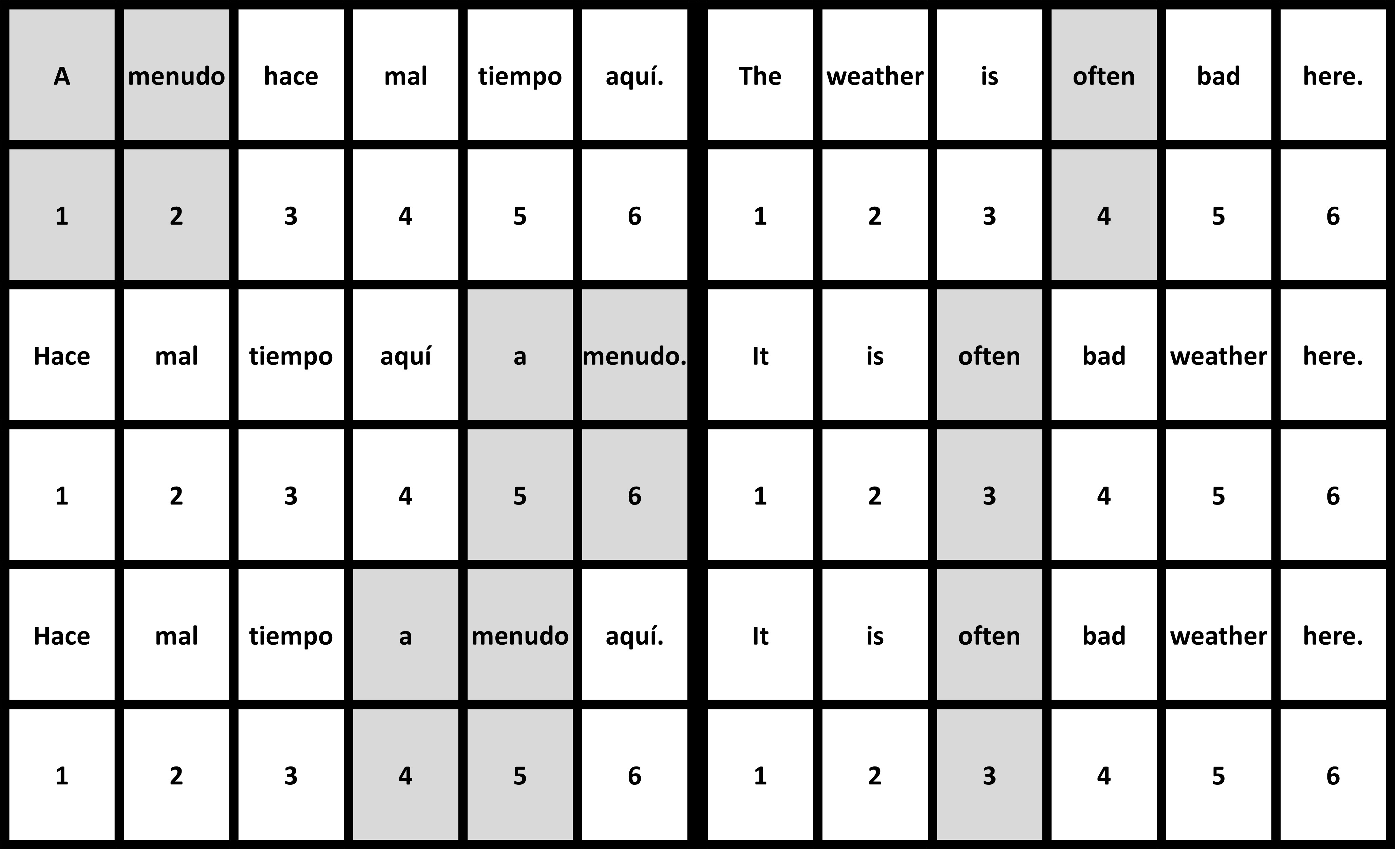 To enlarge the image, bring it up in Chrome, right click the image, and open the image in a new tab.

As you can see, the word "often" never makes its way to the front of any of the variations and for two of the variations, the English sentence remains unchanged (even though the Spanish has a menudo at the end in one and aquí in the other).

Because of observations such as the one above, I apply a certain rule of thumb when attempting to translate a sentence from Spanish into English or vice versa. Keep in mind that I have not read this anywhere. It's just something I've come up with to help me refine my choices when translating. Basically, my rule of thumb is this:

If, on the other hand, it is placed anywhere else in the sentence, I try to understand what that adverb of time is modifying in the sentence and then apply that in a similar way to the English sentence.

Having said all of that, what makes translation difficult sometimes is the fact that each language has its own set of rules about adverb placement. And the looser those rules are, the more complicated things can get. The bottom line is that in the sentence A menudo hace mal tiempo aquí the adverbial phrase a menudo is describing the frequency of the bad weather and, for that reason, it makes more sense and sounds better if you can put "often" before "bad" and, of course, you can, because English likes to place adverbs like "often" in front of modifiers like "bad."

" It is often bad weather here" was not accepted by the Owl.

I tried reporting that this answer should be accepted. We'll see what happens.

But it what I would say too

I find language fascinating. This is the first time I've encountered this sentence, and I felt it most natural to translate it as "The weather here is often bad." I was worried they'd count it wrong because that's some serious reorganizing, but it was close enough to be right.

I think your translation is a good one for a couple of different reasons. In the sentence:

we have two adverbs — a menudo and aquí

Why do I think this is good? Because Spanish and English are often flipped. For example, we say black shirt in English, but camisa negra in Spanish. Adverbial placement is sometimes flipped as well. So, not only is your translation acceptable, I think it is one of the better ones you could make. ¡Bien hecho!

It is often bad weather here. This should be acceptable!

Except that a native English speaker would never phrase it like that.

I know from my profession as a translator that sometimes sentences when translated word for word do not make sense. Therefore after translating try to figure out the true meaning of the sentence. It is often necessary to change the sentence structure. The sentence above is a perfect example.

Which is why my "Often we have bad weather here." should be accepted. I don't think there is even a subtle difference in meaning.

Often the weather is bad here. Says the very same thing, should be correct not wrong.

"Often the weather is bad here"

"Often it's bad weather here" was marked incorrect but it seems a literal translation and is acceptable English ?

As I'm Italian and unfortunately I don't speak a good English, sometimes I can form the sentence that it's not in perfect order in English and getting from DL... correct! Obviously I'm not happy for as I would like to know how to say the sentence in good English.

Here is bad Spanish pronunciation, and Don. T accept right translation in English. Is it really someone very happy

"It often is bad weather here" was not accepted - means exactly the same thing!

Often the weather is bad here - should be accepted!

Interesting that the word for weather and time is the same...

Why can't you say, "often it's bad weather here." It is saying the same thing as "the weather is often bad here."

Duo didn't accept "The weather often is bad here." I reported it.

It's freaking me out. I feel like to quit.

why is there "a" before menudo?

Why? Good question, but you should know that without the "a," the word has a different meaning. For a basic dictionary definition, go here:

For an article, go here:

Why in Spanish do we use a word like “menudo” to make things bigger or more often?

It is written for students at the B2 level, but even if you're not quite there yet, you may find some value in it.

Like I said, it's a good question because it appears that menudo, by itself, used to mean often at one time. I say this because I came across this:

I tried to find a good answer for you, but finding nothing, I posted this same question up on Spanish Stack Exchange. If someone should answer it, you'll find their answer here:

What’s wrong with Often the weather is bad here?

Often it is bad weather here

Often there is bad weather here. counted incorrect. if this were not free we would be demanding return of our money

You could pay a lot and still get less. 1. It's language and will NEVER be perfect. 2. DL is working hard to make it better. 3. How many languages are they working on?

I have learned a lot of Spanish for free with DL. I can put up with some imperfections.

I agree. Thank you duolingo!

I agree. "Often there is bad weather here" means the same thing.

Wouldn't that be "A menudo hay mal tiempo/clima aquí." I believe in Argentina--and maybe Chile--they do say it like that. (Grace? Daniel? is one of you out there to tell us about using "hay" with weather expressions?)

DL is correct. putting often first might be correct, sort of, but would be unusual

You aren't being graded here.

I am confused about this sentence

Parts of weather use hace and not es or está. That's just how it is in Spanish. One of those interesting quirks you have to learn.

Could be wrong but think hace is used in conjunction with the weather.

Often, it is bad weather here

Says the same thing so what's up with the "wrong"???

So did I. That would be a common statement in English in the US

I think a far more common statement in English (albeit American English) would be something including the phrase "we often have" or "we often get" bad weather here.

I agree and it isnt just American english. From the point of view of an Australian born in Britain its fine in both countries as well.

Why is ...it is often bad weather here...wrong

I don't think it is. Try asking them to accept it. It sometimes takes weeks but.....ll

There is often bad weather here works as a correct translation

I posted that it is not good English and submitted It often is bad weather here.

"Frequently" should be accepted.

May 21, 2019
AboutDuolingo English TestMobileHelpGuidelinesJobsTermsPrivacy
Learn Spanish in just 5 minutes a day. For free.
Get startedLogin