"The boy doesn't want to have soup."

You've got to watch these verbs because many of them have multiple meanings.

How do you know it is in terms of consumption? He could very reasonably want to possess soup.

Thanks, good to know and it makes sense.

tomar(toh-mahr) TRANSITIVE VERB 1. (to grab) a. to take Tomó el dinero y se lo metió en el bolsillo.He took the money and put it in his pocket. 2. (to consume) a. to take (medication) Él tiene que tomar sus medicamentos dos veces al día.He has to take his medication twice a day. b. to have Tomé atún para el almuerzo.I had tuna fish for lunch.

3. to take a form of transportation, por ejemplo, tomó el tren a Barcelona. One does not "grab" the train literally as in definition (1) above but still one "takes" it. :-)

That's what I got too. Doesn't make much sense

We eat solids and we drink liquids. So it makes sense even if we don't use it with soup in English. This is not an English course and Spanish speakers do drink soup. Language is not quite as logical or consistent as math. The rule is, "When in Rome do as the Romans do.

that is english or spanish course. in different languages we eat soup, do not drink. drink form a glass or a bottle, but never from a bowl.

I drink the milk out of the bowl at the end of my cereal.

that whi duolingo is sucks

So....you don't like duo because it tells you how the language is actually spoken, rather than what appeals to you?

that's why you can stop using Duolingo

Yes, he should finish English, first

Are you suggesting we eat soup then?

Why do you need the determiner "la"?

I would love to have someone explain this. Answer is accepted with or without "la" for this sentence, but some places require an article or won't allow a gratuitous one. Even with my outside research, I can't find rules that cover all examples (there are always Duolingo sentences that fall outside the rules), and very few people on the discussion forum have provided good (or any) explanations.

I don't know if you'll like my answer. For starters, I don't have any rules for you because it seems every time I try to come up with one, I find something that contradicts it. Instead, I've just resigned myself to the fact that some things simply must be learned as you go and the more exposure to the language I get, the more I'll learn.

One of the things I do when trying to understand a language pattern that differs from my native tongue — English — is look for trends. The Google Ngram and general web searches with Google are great for such a task (albeit, not a perfect science). The phrase "quiere tomar la sopa" was a bit too infrequent to be found with a Google Ngram, but a simple Google search did produce some interesting results. I experimented with the article and without as well as with negation and without. You can see the results in the chart below: 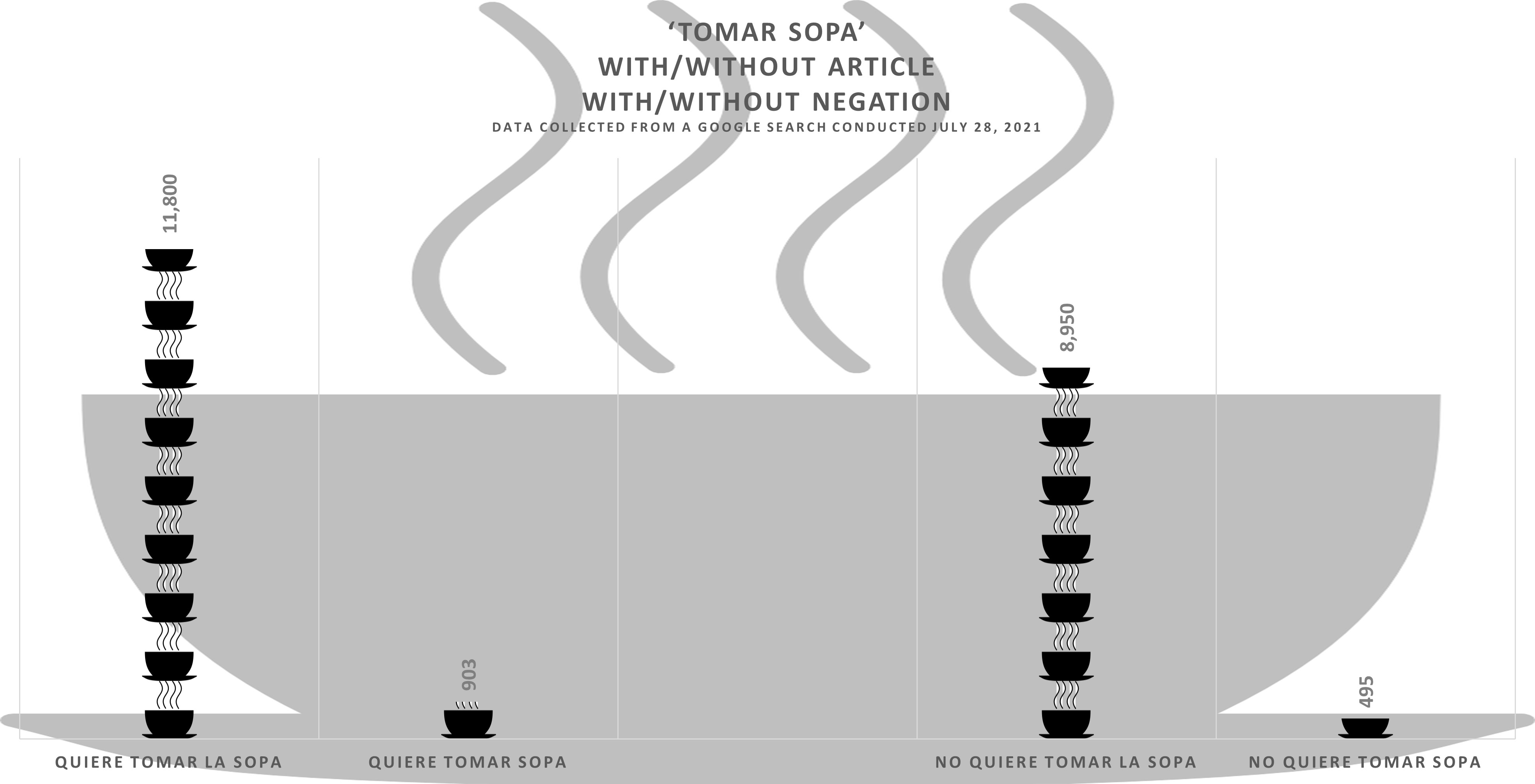 To enlarge the image, bring it up in Chrome, right click the image, and open the image in a new tab.

That the phrase was more common with an article did not surprise me. What surprised me is that the ratio of phrase with article to phrase without was larger when the phrase was negated — 18:1 versus 13:1. Had I not taken a look at this, I would have assumed the opposite.

I imagine myself seated at a table in a restaurant. The server comes to take my order. I'm feeling like soup that day, so I tell him, "I'll take the soup, please." I would never just say "I'll take soup, please." It sounds really odd to me. Perhaps something similar is going on with Spanish.

If, instead, you translate tomar as have, it's a different story because both "I'll have the soup," sounds just as natural to me as "I'll have soup.") So, thinking of "tomar" more literally as "take" may help you use the article more like a native Spanish speaker.

Lastly, let's not let it be lost that the article isn't actually required in this context. There's too great a preponderance of usage without the article to tell someone they're wrong in this context if they choose to omit it. Clearly, a lot of people simply say "tomar sopa."

Started reading these comments and I learned a little, but I'm walking away still scratching my head, as I've been doing this for 50 days straight now, I'll pause for the applause...... I've learned quite a bit but I've also learned that Spanish is a lot more confusing than I thought. I work around a lot of Latinos y Latinas whose first language is Spanish, and have always been told that English is a very difficult language to learn and it's Spanish as much more simple. I guess my point is, the Grass is always greener at the dispensary across the street.. Duolingo is a great application, I am slowly learning to structure sentences in Spanish thanks to this genius app. Thank you Duolingo and thank you for everybody on these threads answering and helping everybody out..

isn't "to have" tener? why does Duolingo say beber? wouldn't that be "to drink"?

I thought the same thing! Tener is to have, beber is to drink, tomar is to take.

I know tomar can be used as "to drink" with liquids, but what if the boy doesn't want "to have" the soup at all, as in not ordering it in the first place? Wouldn't you use tener in that case?

I was a social worker, and Spanish-speaking clients used to say they "drank" their medicine, even if it was in pill form. It came immediately to mind when I saw that tomar, which I thought was "take" as in "take the bus" was also drink.

Why tomar and not tener

I learn so much from the comments thank you

In this same unit there is a grammatically similar question about dessert which I got wrong because I said el postre. So this time I left off the la and then I got this wrong too. How are you supposed to know if the article is included???????

"el nino no quiere bebe la sopa" does not seem like the correct answer.

it would be beber not bebe, and the ~ can't be omitted (el niño) as omitting it can really change the meaning. But I think the intent here is to show one of the meanings of tomar. (cf. 1 Corintios 11:24: "Tomad, comed: Esto es mi cuerpo que por vosotros es partido: haced esto en memoria de mí.")

I agree with you!! Duolingo sometimes seems to require very precise word translations and other times (like this), it comes up with a more idiomatic term/word usage!!

why is this "el nino no quiere tener sopa' not correct?

I think Duolingo may be telling us that in Spanish, a restaurant (for example) may "have" soup, but patrons may "take" or "drink" soup, not "have" soup.

I asked the cook at the local deli "¿tiene hamburguesas?" (using tener), so if the answer is in the affirmative I can order one (quisiera una hamburguesa, por favor, con queso y lechuga y tomate y cebollas, y con muchos jalapeños), but when the burger is ready, he could say "puede tomar la hamburguesa ahora" (using tomar).

Estelle0 My answer was marked incorrect--stated it should be "el nino no quiere BEBER sopa". (DRINK??? soup) instead of "to have--"tener"???

I've had seafood soup in Spain. Wonderful but you could have used a fork. No way could you drink it!

I will never understand articles in Spanish...

Just using Duolingo, you can really get confused. There are several other sites you can find with some basic rules that will help 80% of the time. It's those other 20% that will drive you nuts. But English has its problems too.

Ambiguous Duo why not use "have soup to eat" or even "eat soup" instead of "have soup" just to be crystal?

I put tener. It said tomar! That means to take soup. It refused beber and comer as well. It will only take tomar. Wth?? Im doing tomar to get past it but thats bs.

When you come across something confusing like this, do some internet searching. You'll find the primary translation is "tomar sopa" even though it sounds odd to our American English ears. If you make confusing questions on Duo be a springboard for learning from other sites, you'll learn and understand things much better than simply sticking with what Duo gives you.

sometimes they want the la or el before ? and sometimes not???

Isn't this most literally translated into the boy doesn't want to drink the soup. I'm not sure if this stretch of terms works.

Does tomar also stand in for comer when the food in non liquid? the boy doesn't want to have meat. no quiere tomar la carne

Thanks Spiceyokooko. That makes it very clear

So when were y'all gonna teach this!? This is my first time ever seeing this in 3 years

what is the rule for using ' the' in sentences, sometimes its before a noun sometimes it isnt

Check out lisa4duolingo's great answer above on whether it's appropriate for this sentence. Also there is not any single soup that he wants, so it's pretty safe to say that "all soup" is not something he wants to have. When I can put "all" in front of the noun, I've been pretty safe using the article. (It's a little convoluted here, since it's a negation, but the idea is still there.)

Definitely a good idea to try to make some of your own rules based on the examples provided (as lisa4duolingo mentions and see which ones hold up, or at least hold up most of the time. I know I have my own ever-growing list, including exceptions.

If it's about tener being a possessive verb, why not use comer vs. tomar?

Pretty sure it's just one of those phrases that doesn't translate 1 for 1 ... I'm sure we have plenty of English phrases that confound learners.

But if you think about it, don't you take a drink at a water fountain? Or when the waiter asks what you'll have, some people say, "I'll take the spaghetti with meat sauce."

There are some connections, but sometimes you just have to accept each language on its own and learn how it works. It's not like we're going to change it by disagreeing with how it's structured.

Would be nice if this was pointed out by Duolingo

I used chico instead of niño but it counts it as wrong... Don't they mean the same thing?

I am an American English speaker and I can assure you that most Americans would be perfectly comfortable with "have soup" in this context.