It's a struggle! But I think I am getting somewhere.

I have worked hard! Really hard. I knew I should. Languages have never been easy for me.

But I have all gold until 1.st checkpoint. Looking down the tree I can see that I have barely started.

I am already level 14. Because I need a lot of practice.

And I know it is not done just because it is gold!

Only at the first checkpoint. I.e. I can't really say anything, at least not anything usefull. But I think I can see that it just might work out. Which is a HUGE success for me. It took me 5 years in primary school, 2 years in high school and I still couldn't do much with my English! Then in university I did learn. I had to. Almost all my textbooks were in English. And then I went to live in the US for 9 months. So now, finally English is decent. Not exactly good, but decent.

I was a volunteer in Moldova for 5½ month. I had a private teacher (Moldova is, or at least was, so much cheaper, that I was happy to pay this from my savings). But it didn't help much. I couldn't say much at all. And now, years later it's all gone.

Then I learned Esperanto. I started "in real life" and continued here on Duolingo. That was a huge success. After around 6 month where I studied at home (before all the technical wonders like Duo and lernu.net etc.) and at a course. We meet every other week. And after just 6 months I went to Italy and stayed with a guy, only speaking Esperanto. That was HUGE, - but Esperanto is constructed to be easy. So you can't really compare.

A few years ago I visited Cuba. I knew well in advance, so I studied on Duo. It was really a mixed experience. I could hardly say a sentence. But I had some very useful words. And in Cuba that actually came in VERY handy. But to be honest, I probably didn't spend the time studying that I should.

Now it's holiday for me. So I have several hours to spend every day.

And I did, and for the first time I think I have an idea about the grammar. I never had in German (which I had to study in primary school and high school), I never got a grasp in Moldova (Romanian) and I never got a grasp in Spanish. I think English is easier, - probably just because it is a lot more like Danish (my native tongue). So I think that is different. And Esperanto is made to be easy. So it's a different story all together.

I don't know how far this will go. Friday I am going to see my parents. So I will more than likely only spend an hour in the morning.

And then for another week I will study hard. Perhaps I'll go out with friends a day or two. But likelywise only part of the day. So I probably have 7 full days of studying.

Friday the 10th I start at my job again.

If I can keep the pace I might be at around level 18 or 19. But probably only at "Aux. V" or "Verbs pr. 1" or so. So I probably still can't say ANYTHING useful, but with a bit of luck I'll be able to move on, slowly, but move on. And eventually be able to use the language for real (might not be in the calendar year though).

And I will have to cut back on the time I spend. I hope to be able to do:

1 hour twice a week (one weekday and once in the weekend).

Oh yeah, I started to study to prepare for a "biblical greek" course that I would eventually do. I still want to do that. But I might admit, I am getting hungry for "modern greek" as well and are thinking to go to Greece. Perhaps in 1 year (next main holiday).

Thank you all, and especially for those who have volunteered to make this course and of course to the staff at Duo.

I do not have much time to throw in what you have, but my thoughts were actually also "New Testament Greek".

But yes, maybe you have a point. Greece is not a bad country for tourism. :)

13 days. Very many hours and now I am level 20, all but one are golden until the 2. checkpoint!

And I really need a break :)

This is my tree for now: 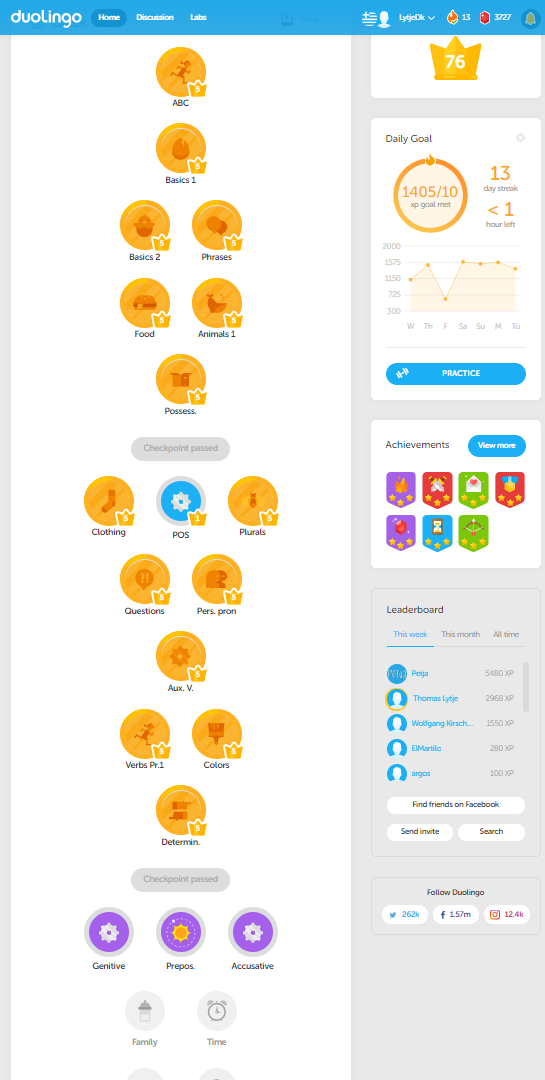 I believe this will be the last update for a long time.

I love your story bro! I am here to learn to read the new testament as well, hence my name. It sounds like the process in going to be easier for me, but the time I have is also much more limited. Let's see who get's it first :)

Well, I like to be competitive, but I also likes to win. I am afraid I will loose this one.

I think I will level out (level 25) next year, but probably still not be able to speak, - and probably only be halfway though the tree (lesson plan). 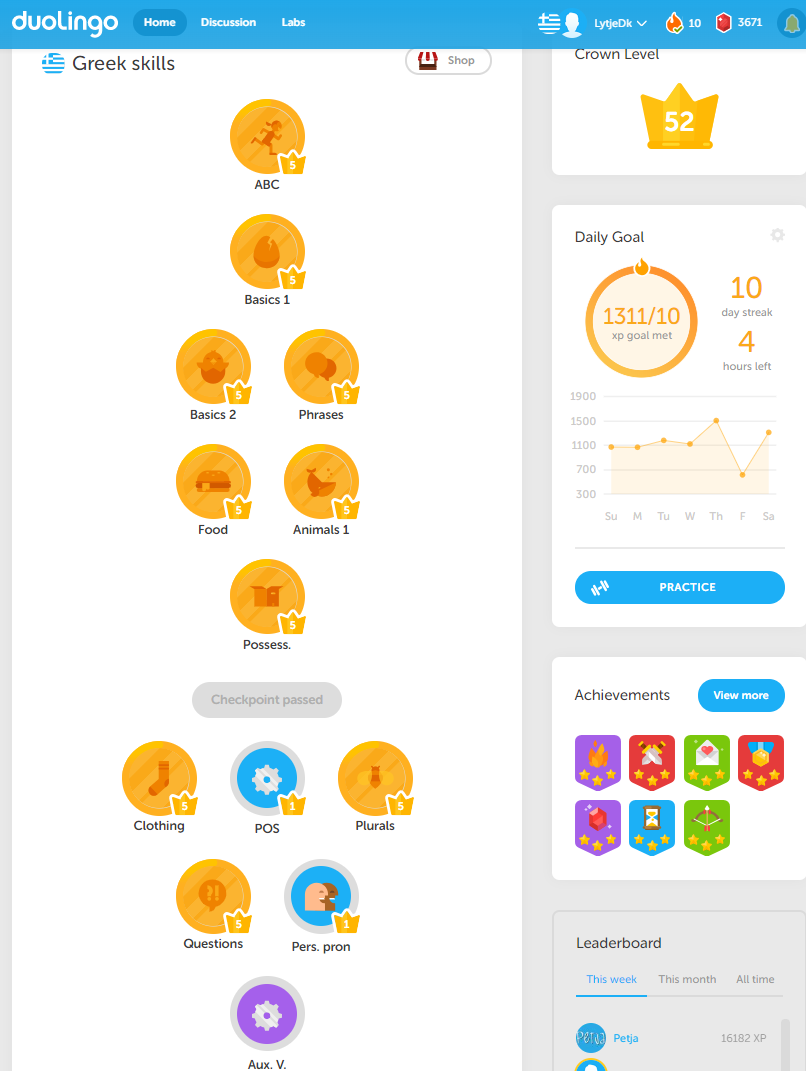 It's hard! I am struggeling. But I can feel that it's getting harder. I am aware that there are things I don't know. On the other hand, - I am (as mentioned before) doing the golden ones over and over. And most of the times I get 15+ points when I do either above the checkpoint. So food was hard, but not any more. Possesions was very hard. It's not very good, but it's getting there! Animals and basics 2 are good. So, yes. I can feel that I am learning! Some of it might be because I am learning the sentences more than the language. I think it would be nice with more sentences (but I am aware that I am probably doing the same lesson much more than average, because I have to!)

Questions, plurals are rather hard. But I suppose they'll be better, like the one above the line.

POS - I hate it. I don't know these words in English and to be honest, I know some of them in my native tongue, of course, on the other hand. I don't think I know half of them. So that is annoying.

My holiday is nearing the end. So soon I will not be able to use the time I have done so far.

In short: I think I am learning. It's a struggle, it really is. But I think it's worth the effort.

What are you doing to continue advancing if you don't have a Greek keyboard?

Try Swiftkey for mobiles (android or iphone) or just add the Greek keyboard to your lap-PC-whatever.

I use Gboard for Android. It is good. Not perfect, but good. Hints are almost completely right and moreover it teaches me orthography. A great advantage in Greek. Because actually orthography in Greek like in English, you have to remember how to write a word. Duolingo skips some typos, but never forgives you if a word is misspelled and exists in the language you learn.

I don't understand what you mean Susan. I followed the instruction on Duo how to get it on the PC. I don't use Duo on my mobile. I have very few apps on my phone.

Where are the instructions on Duo on the PC? I don't see any.

Well, it works very neatly for me. Except the υ (ypsilon) is a y, not u. If confuses me. Except for that I think it's very intuitive to work with.

I have studied physics. So I know all the letters already. And I have done a lot of computerwork (software developing) so I can easily write without looking at the keyboard.

I suppose that if I couldn't write without looking at the keyboard I would have had to write the greek letters on the keyboard next to the latin ones already there (probably I would do this on stickers or paper and stick it on with tape or something).

And if you are talking about switching keyboards while writing. On the PC I use alt+shift. On my phone (Android) I have a small globe. It switches through my keyboards (Danish, English, Esperanto and now also Greek).

Thank you so much for your reply! At your suggestion, I did try alt+shift. Maybe my computer is too old, but it didn't work for me. I also tried going to settings, but to no avail. I'm stuck in Greek as it won't let me move on without writing some answers in Greek. Blessings in your studies.

HOW TO ADD THE GREEK ALPHABET TO YOUR KEYBOARD

HOW TO ADD THE GREEK ALPHABET TO YOUR KEYBOARD Here are some links to easily convert your keyboard to enable you to use both Latin & Greek characters as you need. We have found these easy to install and simple to use. If you have any other links please share them with the community.

HINT Check the hover drop down hints for ideas. Remember they are like a dictionary and not all ideas may suit each sentence.

For me pressing the left alt key and the right shift key changes between keyboards. But you need to install the keyboard (layout - only one physical keyboard is needed). The above is an instruction. As far as I remember, that's the instruction that I followed.

Thank you so much again! Good luck on the competition, but more blessings in being able to speak. Efharisto poli

Progress report. Lots of XP, - not far down. But that is to be expected :) 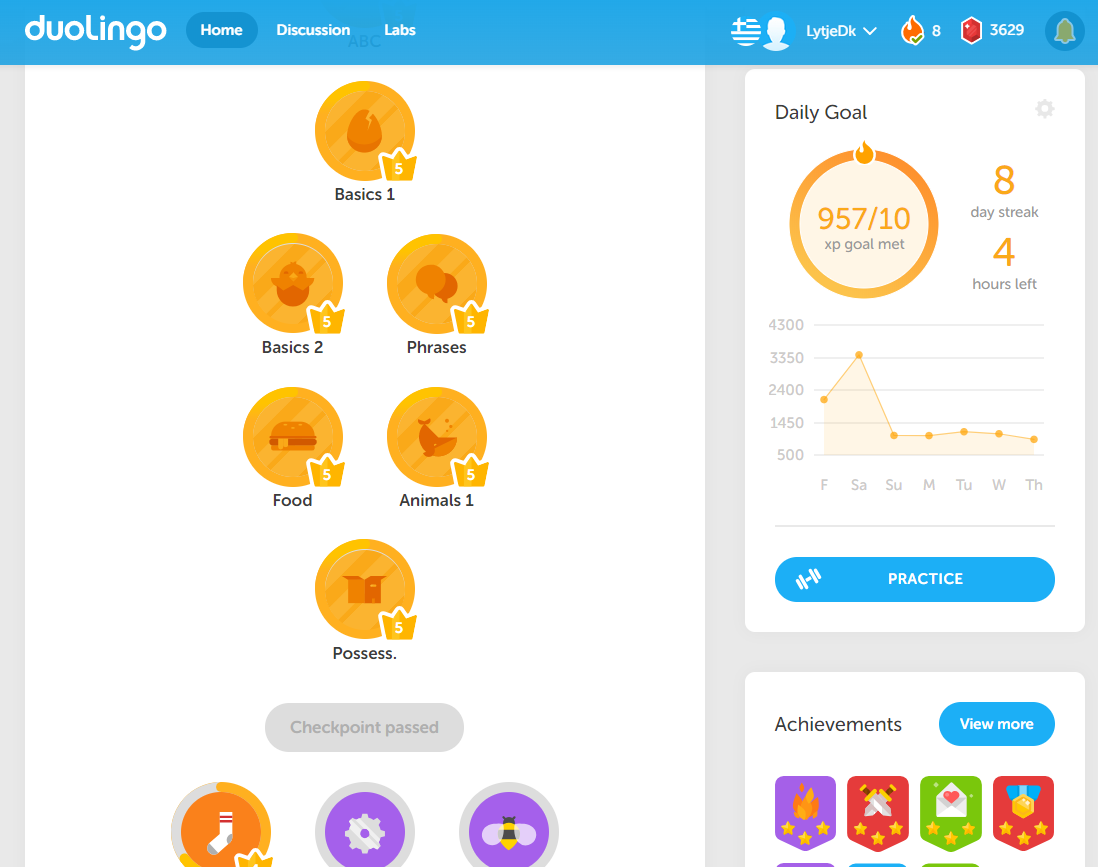 I will probably hit the golden ones for a few rounds more - and make the clothing golden today.