What is the difference between 黃 and 黄?

They both seem to mean yellow. I chose 我喜欢黃色 from the word bank, but the correct answer is 我喜欢黄色.

Honestly when they were constructing the course, someone probably just input it wrong. That one's so subtle that most people probably just haven't noticed since.

Ha, got you. I use Chinese to learn Spanish, so that I can select Simplified or Traditional characters. So that I thought you could select it. This definitely needs to be improved.

黃 is traditional 黄 is simple

Note: If you are reading posts here, you will see the identical 黃 (both simplified and traditional) appearing underneath the title or headlines, which is due to how the characters are coded.

Yes, 黄 is simplified, whereas 黃 (with the slash radical underneath) is traditional. However, 黄 can also appear in area, where traditional Chinese is emphasized. As Taiwanese-American, I know that natives of different Chinese nationalities write the simplified form. In this case, the simplified and traditional forms are interchangeable. As an example, here is the image link taken in Taiwan:

There are few reasons why you see distinct variants of the same character. Firstly, the creator of traditional Chinese text wants to make 黃 more typographically specialized, which makes typed text more distinct from the simplified Chinese text. Secondly, the traditional 黃 is derived from the glyphs as shown below:

For your interest, see the Wiktionary article and another one.

I like the animated gif that shows the stroke order on Wiktionary.

As a giveaway, my last name is also Huang. I often write that in traditional form since I personally find it fancy. If you are interested in my handwriting, please let me know. :)

Cool! Yes,when I was looking up the meaning of that character I saw that it is also a last name. Yes, it would be interesting to see your handwriting. I saw an example online of handwriting from a doctor. It seems that doctors from many countries have a reputation for handwriting that is difficult to read because they write so quickly.

Sorry for the late reply. I was busy fixing my own computer while using the temporary one.

Here is my speedy handwriting, starting with surname and then ending with my English name: 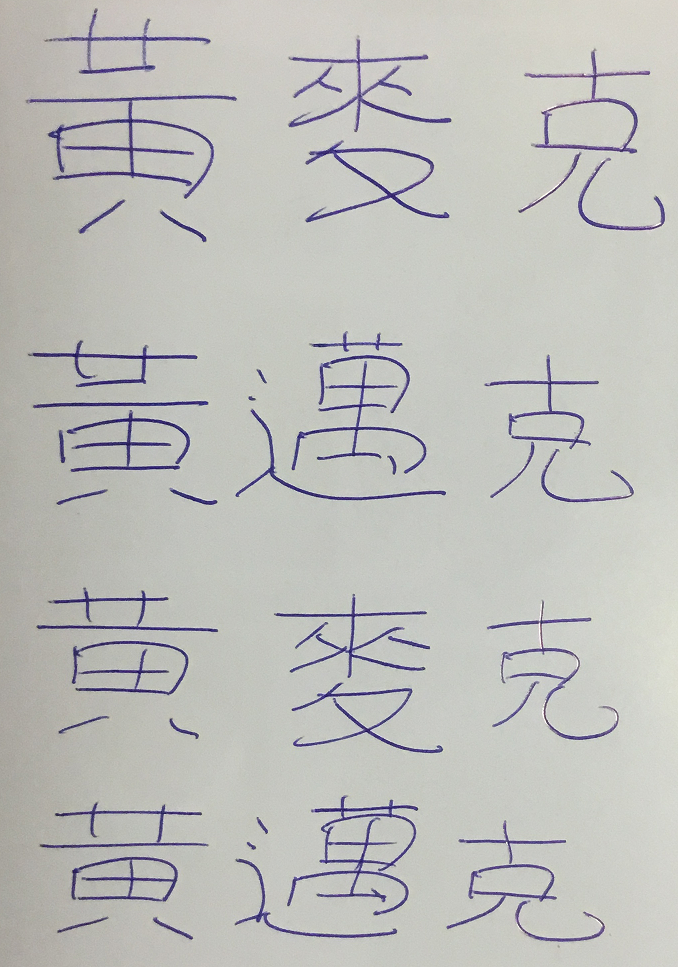 Oh that is still clear I think. I saw a doctors handwriting online and it didn't even look like Chinese to me.