13 Comments
This discussion is locked.

Seriously, the kinship terms are the ones that needed the most practise for me, well after level 5. They (like finger and toe terms) make more sense with some kind of diagram (albeit slightly simplified): 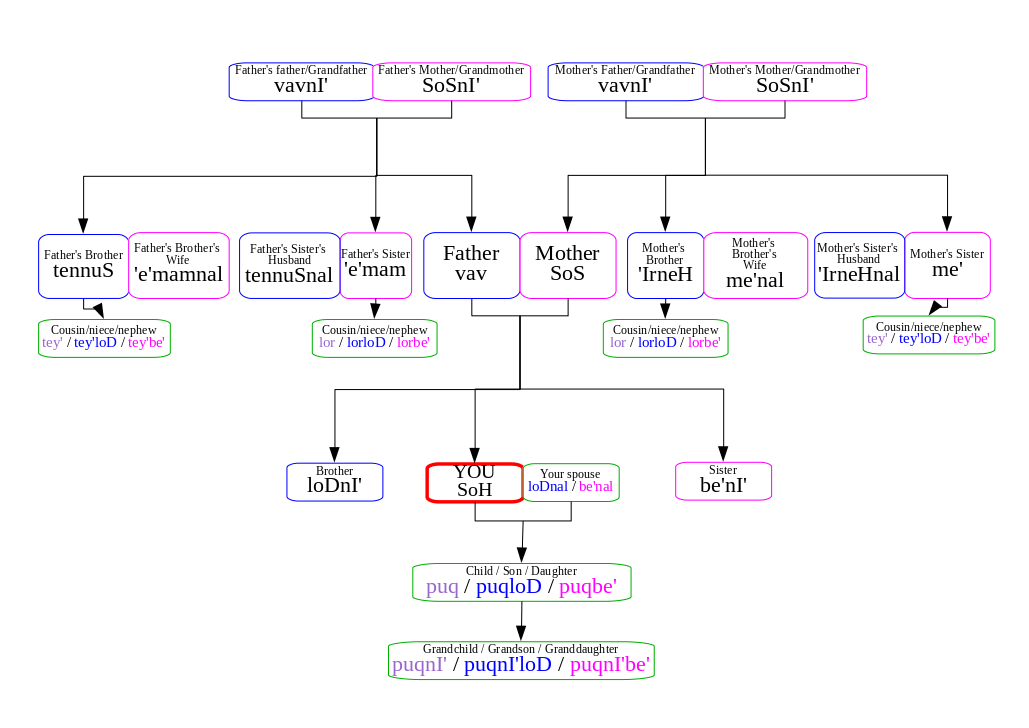 Nice summary family tree, thank you, kahless! I'm going to save and study this. I can foresee the kinship terms being confusing for some time to come, what with all the -nals and -nIs and loDs and be's in various combinations. I can hardly wait for the fingers and toes ... !

Thanks, glad it's helpful. For the fingers I found a mnemonic to be a useful aid. Made up a word (Sen)-SIq-qay-qew-qan, Word for using the (thumb)-then fingers in order.

I haven't gotten to the fingers yet. I can hardly wait. :-D

The, cousins? are especially interesting to me here, mostly because they are not taught in this course. But I am a bit confused by, "Cousin/niece/nephew." I would have expected, "Cousin/male Cousin/female Cousin." Unless a cousin is always "just" a cousin, and the loD/be' forms ARE nephews and nieces, just like it says.

Klingon doesn't distinguish between cousins, nephews, and nieces; it distinguishes between parallel and cross cousins/nephews/nieces.

For example, a lorloD is a male cross cousin (mother's brother's son, father's sister's son) or a cross nephew (man's sister's son, woman's brother's son) -- the important thing being not so much the generation (same as ego or one higher) but the fact that a "cross" relationship is involved (the female sibling of a male person or the male sibling of a female person).

The loD and be' can be added to indicate whether the cousin or the nibling (nephew/niece) is male or female. It doesn't affect whether loD or tey' means "cousin" or "nibling", though, since Klingon doesn't make this difference.

"SoSma' 'e'nal'pu' chaH me'nal'ma''e' 'IrneHnal'ma''e' je" was not accepted. The word order seems strange, as the English sentence has the aunt's husband before the uncle's wife.