A Year of Irish

I've just finished a year of Irish - a 365 day streak that has taken me from absolute beginner to a very slightly less absolute beginner. During that time I've managed to finish the original tree and I'm now working my way through the new crown system with the aim of turning everything gold before the new tree is implemented. I seem to have accumulated almost 57000 XPs in that year, which comes to nearly 16 lessons per day. I'm astonished that I was able to do so many, but i would just pick up my phone or iPad and knock one out every time I had a chance. It beats the heck out of watching TV. I've been fortunate enough to have been in Ireland many times, some for extended periods. I have an Uncle there who is a native speaker, and an Aunt who taught primary school for many years and loves the Irish language dearly. I've tried, fitfully, over the years to learn Irish. Nothing clicked until I chanced on Duolingo as a learning aid for my children and was astonished to see that a course in Irish was offered. I never looked back and was hooked from the very first few words. I rolled them around in my mouth for days afterward.

So now, the results. I was in Ireland in March of 17 with not a word of Irish in my head nor a thought of getting any either. I was back last week. I was able to walk into my Uncle's kitchen and engage him in a short conversation. We talked about the weather. I told him how my family was doing and how old my kids were. I asked him how his was doing and understood most of the answers. (My Uncle is in Donegal, and the accent and some of the words and phrases are different than what is given here) I was wildly happy to be able to do so. He was a little thunderstruck, I think.

My aunt and some cousins were also amazed that a yank could pick up some tolerable Irish in a year's time. I'm not one to run up to folks and start blathering away, but I was happy at the amount of Irish I could call up and use when pressed.

Now, I certainly don't want to give the impression that I'm fluent, or even proficient really. What I am is a very satisfied customer. Duolingo has given me an entry into a language that I'm sure I couldn't have gotten any other way. I can communicate with my relatives using some of the words my ancestors used hundreds or even thousands of years ago. I am deeply grateful to those volunteers at Duolingo who have given me this gift. More grateful in fact than words can properly express, whether in Irish or in English.

And finally, a few tips. A few months ago i discovered Memrise through a commenter here. Memrise is another language learning app that has a course on the Irish used in Duolingo. Every word or term is pronounced and repeated. It has been of immense value to me in my pursuit of Irish.

Now You're Talking Irish is an Irish language course that was televised in Northern Ireland and Ireland back in the nineties. The episodes are available on youtube now. It is conversation based and, importantly, concentrates on Ulster Irish usage for the most part. The main presenter is, I believe, from Teelin in Donegal, which is only a few miles from where my father was born and where my Uncle now lives. It was a huge help in making my Irish intelligible to my Uncle, as the pronunciation in Donegal can be a little different.

Get some reference material. An Siopa Gaeilge is both a website and a physical bookshop. It is located in Glencomcille, County Donegal. It's absolutely packed with Irish language resources. I was in it last week and the nicest lady in the world runs the mail order there. I bought an armload of books that came back to haunt me when I faced the luggage scale at Dublin airport.

And finally, go to the west of Ireland whenever you might get the chance. Go to the very edge of it and try a few words out. Its a lovely feeling, the way they roll around in your mouth.

Your uncail and aintín and col ceathracha must have been delighted with your Gaelige. What a success story! Comhghairdeas, a Sheáin.

I found this browsing around for something related to Donegal. Maybe you'll recognize some of these places from your visit. The 18th century lament Cill Cháis mourns forests destroyed and a beloved benefactress lost.

Scenes from Donegal with Cill Cháis as audio: 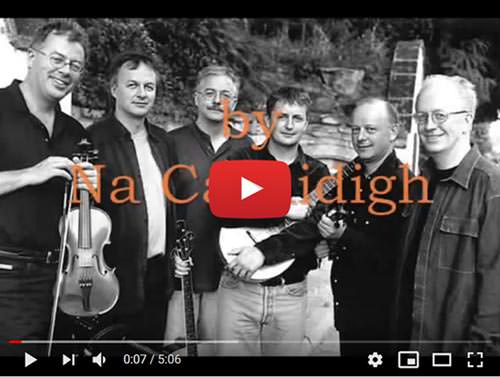 I love the Na Cassidigh's, their Trasna Na dTonnta is very lovely. Their music has really helped me with pronunciation.

Thank you- the second place in the video, Ard an Ratha is the town nearest my father's home. I was eating oysters in the bar shown in the photo, Nancy's, just a few days ago. Thanks again and all the best!

Good job! I'm learning Irish as well. When I first encountered it, it seemed so strange to me. But as I pressed forward, and continue today, it has become a labor of love for me. Good luck in the future!

Voice audio isn't working for me regarding Irish only! Any idea of what's going on??/ Is it a problem for me only??

this is, in part, why the original poster mentioned 'memrise', which is both a web site and a phone app - the memrise 'course' mentioned follows along with the vocabulary used here on duolingo, so you can hear audio recordings of all the words. it can be very helpful if you're nervous about pronunciation. here's the link: https://www.memrise.com/course/375351/duolingo-irish-10/

John, what a great story, what great information and what great advice! I just reached Level 25 in Irish a few minutes ago and wanted to see if folks who had similar aspirations knew of other language resources to further my learning in Gaeilge. Go raibh maith agat!

Until last year, "Levels" referrred to the number of XP that you had earned in a course. 30,000 XP would get you to Level 25, the highest available level. It was possible to complete the Irish course at level 12 or 13, if you did the minimum number of exercises to comlpete each skill.

Last year. Duolingo reorganized the way users progress through the skills in a course, with "Crowns" being introduced, and each skill having 5 "Crown levels", encouraging people to spend more time going over the content of a course, instead of "finishing the course" in a single pass. Crowns only have 5 levels, but they aren't the same as the original XP Levels, which are still used to measure how much work a user has done on a course.

Thank you for sharing your wonderful story. Ive only been using Duolingo so far but have become a bit frustrated with my own learning pace- I need to get it up a notch I feel, and your sources sound pretty good! I visited Galway some years ago to write an essay on Irish as a minority language compared to the Sapmi in Sweden, and have been in love with the language and the country ever since.

It gives me such a warm fuzzy feeling to see people be able to connect with friends and kin in a language that, when I tell people Im learning it, they exclaim "But isnt that language dead!?" :)

I can't tell you how good it felt to be able to converse, even a little, in Irish. A year ago I would have thought it completely impossible. Duolingo can absolutely give you a good base from which to grow, especially in terms of vocabulary. I would love to do a week or two of immersion at some point, hopefully not too far in the future.
Thanks again

If you really wanna immerse yourself in the language there's an area around an fál carraigh that's 70%+ native irish speaking if that helps, also it's in Donegal

Thanks, my father's side of the family is in Southwest Donegal, not far from Ardara. It's not in the Gaelteacht, but its not too far a journey either.

That's so awesome! Great job! Its a tough one.

That's awesome! I was in Ireland about a month ago for the first time. It's such a beautiful country. After noticing the signs written in English and Irish, I asked how common the Irish language is in Ireland. I was told that not many people use it and that it is difficult to learn.

You should give it a shot

Nice story, thanks for sharing :)

This is such a beautiful story! I am so glad you were able to feel such a deep connection with your family from your hard work and dedication!

Thanks for your kind words. I wouldn't say the work was hard, just frustrating at times. Enough repetition tends to penetrate even my hard head. Good Luck!

Wow, I hope I'll be able to learn as much as you, because for now, nothing clicks, gotta just remember everything I see. Thanks for giving me hope... Haha

I wish there were a magic bullet, but there’s not. I’m still working away. I’ve turned the whole tree gold and I still practice 3-5 lessons a day.

Memrise hasa Duolingo Irish course that’s very useful. You can find Irish language content on the RTE player in the TG4 section. Keep it up, it is very rewarding.

Has everyone tried this series which is free from futurelearn. It is repeated regularly so don’t worry if the current module is too advanced;