Вы, to capitalize or not.

So, after some discussion with a Belarusian, and her asking her Russian friends, I'm somewhat confused. I was under the impression it is incorrect to capitalize вы, and that everyone does it anyway. My Belarusian friend and her Russian friends capitalize when used as formal, and not when used as plural. I can't exactly find anything to support my own view. I know I read it somewhere on Duo, but there's a lot of 'somewhere' on Duo.

Does anyone know for sure it's correct/ incorrect, and can cite a source ( in English, German, Belarusian or Russian, please ) to back this up?

I don't mind to be wrong, obviously, but there's now a handful of people wondering what's what, how, why and when. Thank you in advance!

Edit: Wow! Thank you for all of your thoughts and input, people. This was an interesting discussion to read, and I have a clearer view on the topic. ( And, yes, I've reported back. Time zones, though. )

Apologies if I was unclear. I did mean the formal, singular, yes. Also, thank you very much for the sources.

It's very odd, I can recall a strong notion of it being incorrect. throws hands in the air

The latest spelling and punctuation norms were established in 1956. Since then, a few words changed spelling, a lot of new words entered the language, and probably a number of ambiguities in the interpretation of the rules were clarified (Dietmar Rosenthal's books are extremely influential spelling and style guides). The overall system never changed.

In this day and age the polite вы seems to be capitalised in fairly formal correspondence (e.g., an e-mail to an executive of a company) or in materials addressed at any potential "you", like questionnaires (or a giant billboard saying "We care about you and your time. Buy our vegetables"). Even this is not a given, which you can see the evidence of in Moscow's supermarket ads.

Recently, some native speakers started using the capitalised version in online correspondence. I see two problems with expecting this use if you are a non-native speaker. First, the vast majority of users you'll meet are not grammar Nazis (fairly clueless ones at that). Second, this use is unlikely to stick in near future. Professionally edited books published during (at least) the last 150 years follow the boring standard with no capitalisation. The exceptions are few and far between (I found a translation of Minna no Nihongo which violates this rule).

I believe speakers who care about spelling usually imitate what they feel looks about right ; only a small portion follows what they think they have been taught even when it contradicts every book they ever read.

Here are a few fragments from books published in post-Soviet Russia. 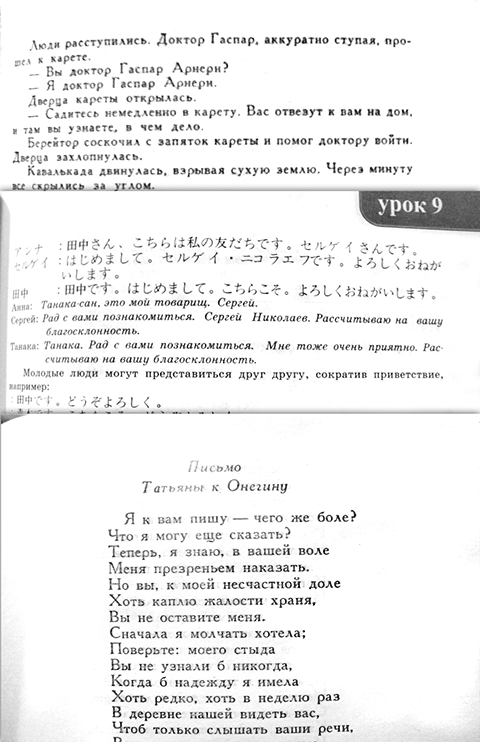 The bottom line is, you may expect singular capitalised Вы in advertisement and in forum posts by some users. Not really helpful to discern the meaning, is it? You should not care, though. English does not distinguish between "you" and "you guys" at all.

I am of the opinion that forum posts, chat messages and most of my e-mails are like dialogue in fiction. Dialogues use вы both for plural and polite "you"—regardless of their level of formality and respect outside stock everyday politeness.

So I sleep perfectly fine using no exceptional capitalisation, apart from what I would use for any other noun or pronoun.

Usally, "Вы" write with capital letter in private letters, emails for one recipient, official documents for one peson, flyers, leaflets, etc. Only if you adress for one person. If you adress more than one person (no matter what the circumstances), you write "вы" with lowercase letter. Sorry for my poor English, I'm learning.

That's an excellent book, if old, as you say; it's what finally taught me to read Russian, FWIW: a group of about a dozen people and I worked through it via e-mail several years ago. Have you seen these? Actually, they could probably be better but are not bad.

What Wzzzup said is the current situation as I understand it, after asking a Russian correspondent a few years ago. But I have also seen it said that Вы used to show respect in writing to a single individual is old fashioned and too formal--IIRC, in discussions on Duolingo.

I dont know what is the official stance but I personally find it annoying, unnatural and suspicious - I mean we arent germans yet, are we? Nobody will get confused from not using capital letter in "вы"

I agree, but in business communication it is not accepted to write like that.

Usally, "Вы" write with capital letter in private letters, emails for one recipient, official documents for one peson, flyers, leaflets, etc. Only if you adress for one person. If you adress more than one person (no matter what the circumstances), you always write "вы" with lowercase letter. Sorry for my poor English, I'm learning.

"Вы" is used to express respect to a single person only in very formal writing. E.g. you can leave a comment to a post of a complete stranger in a social network using "вы":
"Согласен с вашим мнением..."

but when writing an official request to an editor or moderator, it is preferable to use "Вы":
"Обращаюсь к Вам по поводу удаления моего сообщения в сообществе..."