@staff Have there been any changes to your PRACTICE algorithm code and choosen difficulty level?

Since a few days it suddenly behaves very much different for my EN->PT and PT->EN / PT->DE courses.

My personal feeling is that it got a bit easier again since the last practice update last year (especially the "timed practice" got so much more difficult) and now there are many more multiple-choice exercises instead of typing on the web portal even with the "timed practice"?

My crowns per skill vary from L1-L3...but I can clearly see that your system works now differently.

I do suddenly see too many "picture exercises", even for my finished EN->PT course.
It is not only for my PT->EN reverse tree where I have to complete new L0 lessons (where vocabulary will highly focus on those "picture challenges").

With the update from last year the "timed practice" was a bit too difficult for me...even having been learning Portuguese for 2,5 years on your platform....I regularly did not score that high and quite often I was only able to get 3-6XP or did not pass (0XP) because of a much longer sentence with higher typing difficulty.

I noticed a sudden change with the Practice feature algorithm too! For me it occurred three days ago (20th April).

I've been doing the EN->JA course on web for two years. I nearly always do global timed practice. I've noticed the global practice feature has been extremely static in regards to where target language typing questions are permitted to appear in the round, and it has been this way since at least as far back as the crowns update a whole year ago. I was discussing my findings six months ago in the following thread:
https://forum.duolingo.com/comment/29129783

It never strayed from this strange, rigid order. This has been annoying, because, if I repeatedly don't get past 15 answers before the timer runs out, then I'll never receive any questions asking me to type in the language I'm learning! xD

Well, beginning three days ago, here is how global practice is behaving for me now: 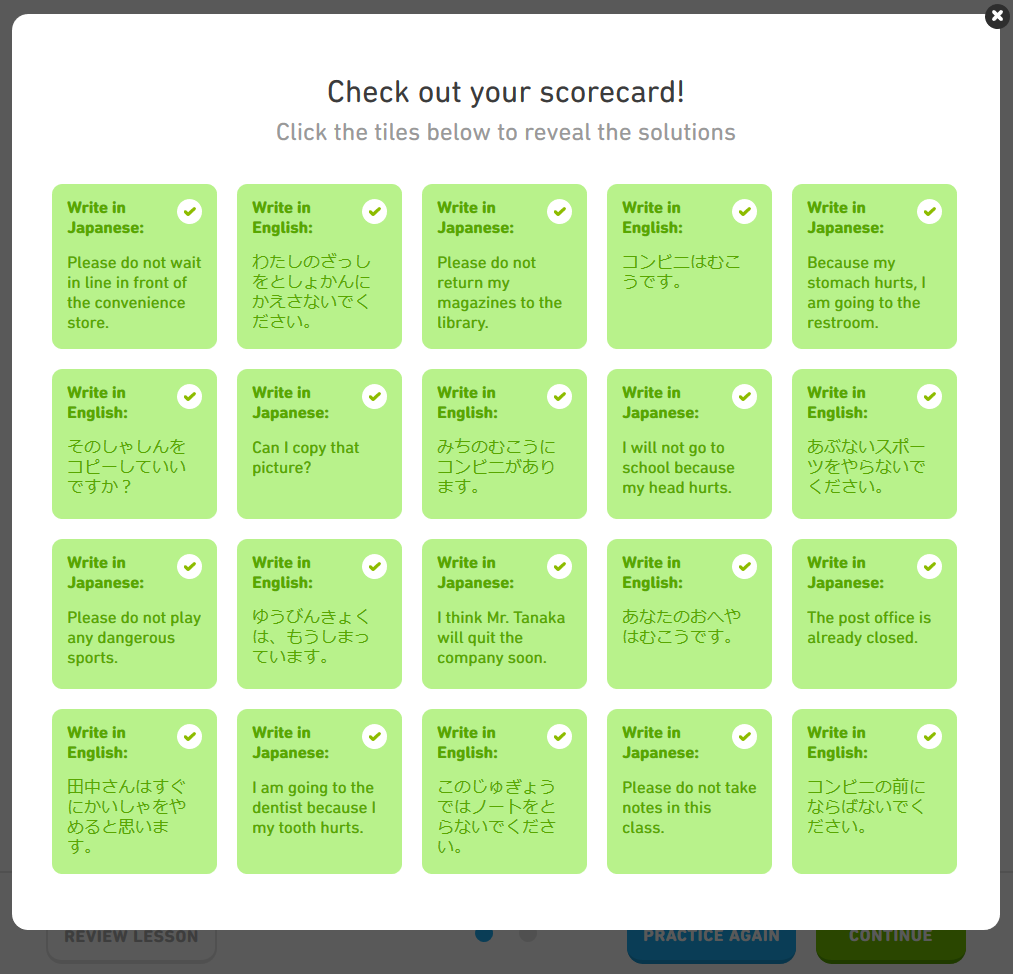 My tree has been 5 crowns in every skill for over nine months. The previous pattern of 16th, 17th, 19th, 20th had been happening this whole time even at crown level 5. So this change three days ago isn't due to any progress I've made in my tree at all. It is definitely just a sudden, completely out-of-the-blue change. ^^

I have noticed a change a few weeks ago as well. Practice used to seem to help with words I was having difficulty with. The last few times I tried practice it was just the opposite. Every word in the practise I was already at full strength. To emphasize, I did not get a single word that was less than full strength.

I really hope they fix this issue. It would be nice if duolingo provided some solution to keep what I already learned from going stale.

thank you, and may I say you have a fine looking pfp yourself.

Have noticed a change in the past few days for the Italian course (seemingly a bit easier sentences).

This change is definitely not for the better. It's made it way too easy and these courses need to be a lot more challenging. You don't learn by the lessons being easier, that's for sure.

You don't learn, but you do drive user engagement and warm fuzzies! That means more money.

I think the warm fuzzies is what they're going for, personally.

I have observed it as well in the Android app. Picture exercises are too frequent. For example I have gotten the baby picture up to thee times in the same practice round, once even back to back. I have seen this behavior now in several courses: Eng to Dut, Eng to Rus, Spa to Rus, Spa to Por, Spa to Cat.

Quote: Picture exercises are too frequent. For example I have gotten the baby picture up to thee times in the same practice round, once even back to back

Do you maybe know what skill the algorithm pulled the word from?
Was that skill on a L5 ("L5 crown bug"), L2-L4 or L1 crown level?

My feeling is that the global / timed practice probably ignored the specific crown level as the code change from 2018 - rolled out (much) later than the crown update in April - got so much more difficult for my Portuguese trees.

We can at least hide the picture with the help of Camilo's Tampermonkey/Violentmonkey userscript "Duolingo Tree Enhancer" https://forum.duolingo.com/comment/19654789/Userscript-Tree-Enhancer on the web portal.

Personally I would like not to get ANY more picture exercises on the L1+ crown level for words which I know well (this includes reverse trees).

IMHO they are meant for the first L0 level when we do up to 10 lessons to learn a freshly unlocked skill and its new vocabulary.

@Thomas.Heiss, yes, my skills are at L5.

This might explain it why you get "beginner stuff" thrown at you.

Very likely that you run into the "L5 crown bug" which makes PRACTICE exercises too easy.

I am on L1-L3 (L4) skills at the algorithm code works better with that.

I am not aware of any update if the "L5 crown bug" (and select algorithm for sentences and challenge types) has been fixed by their developer team in the backend code.

Does that mean that you use the same high L5 crown level level up concept for all your courses?

This might explain why you see the common behaviour across your trees.

I have noticed it in En-Da course as well. I have started getting very basic questions and a lot more pictorial questions. I have therefore started using the individual skill practice button instead of using the main practice button in the app. I do not feel challenged anymore by the practice button- not necessarily because I am a pro in my target language but instead because the questions being thrown to me are extremely simple.

Isn't it kinda funny that we are discussing (at least we users try, how about your development team?) in this thread about the sheer amount of multiple-choice exercises and newly introduces picture challenges (in practice mode!) on the web portal and that we are searching for alternative ways:

I guess we would have to call this (advanced) user settings or maybe some code tweaks which only fires back on a higher word error streak or only for the beginner L0 crown levels.

And now your last updates on the web brought us this on higher crown levels:

May it be possible to reach any community manager so we can reach to your head / senior backend developer?

Is anybody - hopefully - reading our threads??

It seems when this message was written, I got plenty of hard questions in some languages. But now I'm getting easy ones in all languages it seems. But I can see when I make no mistakes for a while, it starts to increase the difficulty, but as soon as I make a mistake I get easier questions next. I'm not sure if a "you have a typo" is enough to trigger that, but it may be.

The user "W-Ruggles-Wolfe" pointed me to this new thread: