Translation:You are a good teacher, Samia.

It should be pronounced Samiaah without the "tun" in the end.

Yes, I find myself behaving like a naughty child learning to read and guessing words from their first letter. Or last letter. Or a letter in the middle if I'm good at recognising that one.

Shouldn't be "مُعَلِّمَة" instead of مُعَلِّمة ? I mean... in the audio, it says "mu3allima", not "mu3allama". is there one of them wrong, or both are possible? 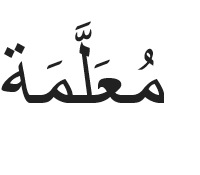 The only difference is the small diagonal line below the first word and above the second one. Notice that the letter ل (L) has another mark above it (like a small w). It's called shaddah, and it's the reason why you see doubled letters in Arabic romanization.

The mark above the second ـمـ (m) doesn't matter, because it's written and pronounced the same way either way.

You explained it in an excellent way.

Why is the word written as مُعَلِّم‎ (muʿallim), that is, with a لَّ but with a lli in parantheses? Would that not be a lla, since we have a fathah, not a kasrah above ل?

What is the difference between "You are" and "You're"? Are they different words in Arabic?

Disgusting! I wrote you are as you're what's wrong in this?

So no one is going to talk about the incorrect audio?

Looks like you just did. ;) You can report it each time it's incorrect. If enough people report it, maybe, just maybe they will correct it.

Ya is use instead of coma,

For 'anti' they don't pronounce the 'ti' part . So it gets confusing

I just forgot 'a' and I got wrong