Hi everyone! Today we’re going to look at one of the most visited countries in not only Africa, but the whole of Arabia! I was lucky enough to find so many facts, that it was hard to narrow them down, but here’s what I’ve got for you:

That’s it for Morocco tonight! I really enjoyed making this post, and I hope you’ve enjoyed it too! :D Any interesting/important facts on Morocco I’ve neglected, please share it with us below! Thanks! ;)

And a video to add the final touches to your Journey to Morocco:

Hooray for #27! It's a shoutout to me!!! بو جلابة! Also, my profile picture is the emblem of a football team from Fez. I feel like the mascot of this post.

XD I didn't notice that! Yes, you're the hero of this post without doubt! [after those two failed me by not liking Couscous! hmm!] ;p

I have never tried couscous.

;p Oh that is SAD! Do they not have it in America? Cus they have it in Britain, France and some other European places

I have never seen couscous here :(

No 18. Marrakech is a popular tourist attraction in Morocco.

I've been and it's great! Very beautiful city but really hot during summer. I got a tan there! XD 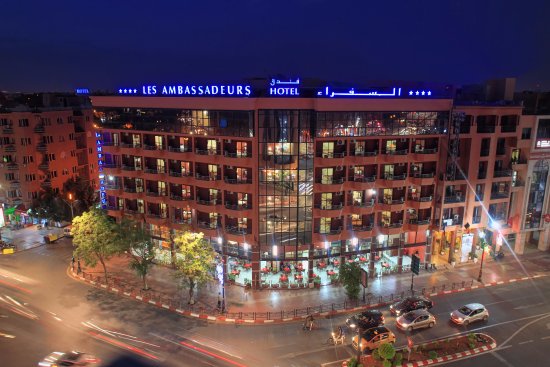 An aerial[kind of] view of where we stayed. It's a nice place and staff are friendly. ^-^ 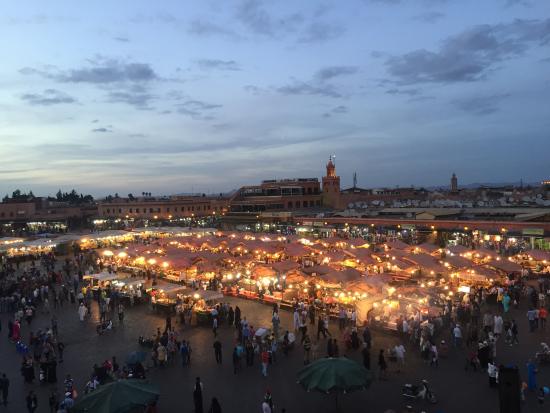 A big market called Jemaa el-Fnaa. We went here a couple of times during the nine days we stayed there. In the background, there's a minaret of a mosque[seem to have forgotten what it is called :o] that we never managed to visit.

Talk about not going anywhere! ;p I'm sure it was a great visit, I'd like to go there too!

H! Well your taste buds are messed honey! Actually, the reason is, Libyans are the best at cooking Couscous! :p [don't hate me Moroccans] It's most annoying when a foreigner cooks Couscous and says it's nasty just cus they can't cook to save their life [not you specifically just in general]... But anyways, you guys are known for adding bananas into everything so you can't say anything! XD

Yeah, I don't even know when to stop... I mean at first I was gonna stop when Arabic was released but I guess it's too late now

Well honey, your taste buds must be messed up too! Banana tastes good with everything. Couscous can't compete! ;p

:OOOOO Naaa! You need immediate help! Bananas are meant to be eaten alone or with honey, HONEY! Sigh!!!! Even the food I cook tastes better than your banana mush! XD [just telling you, I'm terrible at cooking, i'm just good at eating XD]

I love banana and can eat it on most things, but pasta no. LOL

Go away Andres! You don't even have spice on your food stop backing up Banana Girl! [officially your new name]

Banana with pasta?! Poor Italians their reputation is getting ruined with your terrible mix ;p

What even is Guacamole?

Heyyyyyyy. You haven't even tried it yourself so you can't say nothing.

I feel for this boy. I get him. XD

Oh I like avocados, but on there own thanks! ;p Andres is trying to be so healthy and perfect, EXPECTED XD

LOL All my friends have asked me if I am on a special diet and I always just tell them no...I just like eating healthy foods. I really don’t think they believe me, but I swear I am telling the truth LOL

As long as it's not cooked by Andres or Banana Girl it's amazing :) See! this guy has taste buds^

Woah this is interesting! Thanks for this! :-)

Thanks! I'm glad you found it interesting! :DD

They like green tea too? Me and them would get along great then. ;)

Update: Wait...Don’t you live in England? And you don’t like tea?! Hmm...I don’t know if Queen Elizabeth would approve.

Mushroom tea isn't nice trust me you don't want to try it! XD

Wonderful facts as usual! I always am eager to read your posts :)

Thanks! I'm always glad to see you on here :D

couscous is a very famous dish in Algeria and Tunisia, not just in Morocco, here we call it "t3aam"

Nice! It's also in Libya we know it as "Kusksu" [Couscsou] but maybe it originally started in Morocco?

I searched it! it's of Berber origin [see! we create all the nice food lol] and Morocco has the most Berbers in the world I guess ;)