Hola todos! Today we’re going to head to the long-awaited Alsoomal! [or Somalia in the boring language of English] :D

1# Somalia Is situated in the Horn of Africa on the easternmost edge of Africa with the Indian Ocean to the east, Ethiopia to the west, Djibouti to the northwest, Yemen across the Gulf of Aden to the north and Kenya to the southwest.

2# Somalia is a semiarid land in the Horn of Africa, and it is flat in the south, with mountains in the north reaching more than 2,000 meters (6,500 feet)

3# Mogadishu is the capital of Somalia and its largest city. It is also known as Xamar.

4# Somalia experiences a very hot climate as it is located close to the equator. The average temperature round the year is 20 to 40⁰C. Some parts in the north experience temperatures above 45⁰C.

7# Jubba-Shebelle River is the Longest River in Somalia

8# About 2% of Somalia’s land is arable. [suitable for growing crops]

9# In area it is slightly smaller than Texas.

10# Generally arid and barren, Somalia has two chief rivers, the Shebelle and the Juba.

11# This country is the first African nation that was used for flying warplanes by the British.

12# Somalia is the only country in the world that does not possess a central form of government.

13# Somalia is a Home to infamous pirates.

14# The Egyptians referred to Somalia as the Land of Punt that was rendered famous for frankincense and myrrh.

15# The Portuguese were the first European explorers to visit Somalia.

16# The customary law of Somalia is known as Xeer, a polycentric legal system with no institution or legal agents to determine or interpret the laws.

17# Somalia has one of the most advanced telecommunications systems in Africa.

18# Somalia is the only Islamic country in the world that boasts of a 100% concentration of Sunni Muslims.

19# Somalia has the largest refugee camp in the world.

20# Somalia is the only African nation that can boast of the cheapest cellular tariff rates with some companies charging less than a cent per minute.

21# Somalia comprises of 27 regions and was colonized by both Britain and France before it gained independence in July 1, 1960.

23# Provisional Constitution for the Federal Republic of Somalia, approved by a constitutional assembly 1 August 2012

24# The origin of the Somali people is not known. Nevertheless, historians opine that the Somali tribe originated in the south European highlands but gradually migrated to populate Horn of Africa at around B.C. 100.

25# Somalia has a rich musical tradition that has evolved out of Somalian folklore.

26# People gather around a communal bowl or platter, and eat only with the right hand.

28# When eating, people in Somalia scoops the food from their bowl using their first three fingers. Some will roll a banana leaf and use that for scooping. Urban Somalis will use silverware while dining, but many would still rather use their fingers.

29# Nomads in Somalia consider the country’s pastureland available to all. If a family digs a water well, the property is then considered to be theirs.

30# The most widely recognized symbol in Somalia is the camel. Camels provide meat, milk, transportation, income and status for those who own one.

33# Lag Badana National Park is located on the far southern coast. It was the first national park to be established in the country. During the second half of the 1980s, the Ministry of Tourism under the Siad Barre administration sought to center the tourist industry in the vicinity of the park, with nearby coral reefs and offshore islands likewise envisioned as part of the development.

34# Laas Geel are cave formation on the rural outskirts of Hargeisa. They have some of the earliest known cave paintings in the Horn of Africa.

35# Laas Geel’s rock art is estimated to date somewhere between 9,000 and 3,000 years B.C. The cave paintings are thought to be some of the most vivid rock art in all of Africa.

36# Located in the heart of Mogadishu, Shanghai Old City is one of the most popular landmarks in the city and is best known for its interesting and unique Chinese architecture. This relatively wealthy area has been controlled by warlords at different periods during the civil war.

37# The Mosque of Islamic Solidarity is a mosque located in Mogadishu. It was constructed in 1987 with financial support from the Saudi Fahd bin Abdulaziz Al Saud Foundation. It’s the main mosque in Somalia’s capital city, and an iconic building in Somali society.

38# The Mosque of Islamic Solidarity is the single biggest masjid in the Horn of Africa. It’s capable of accommodating up to 10,000 worshipers.

39# The Tomb of the Unknown Soldier in Mogadishu is a monument erected in honor of the Somali men and women who died in defense of the Somali Republic. It’s popularly known as Daljirka Dahsoon and it’s an important landmark in Mogadishu.

40# According to most scholars, Somalia was an important center for commerce with the rest of the ancient world. It’s among the most probably locations of the fabled ancient Land of Punt.

42# Somalia is made up of 27 regions and was colonized by both the British and the French before it gained independence in July 1, 1960.

43# Somalia has a rich musical tradition that has evolved out of Somalian folklore.

44# They’re also obsessed with adding bananas to everything. So if you ever find yellow mush between your pasta, or between your rice, then yeah ;p It’s a banana. [they have it like fish and chips in England XD JK]

Anyways! That’s enough from me! I hope you’ve enjoyed this post and cya next time :D If you have better facts that you’d like to share, feel free to do so :) 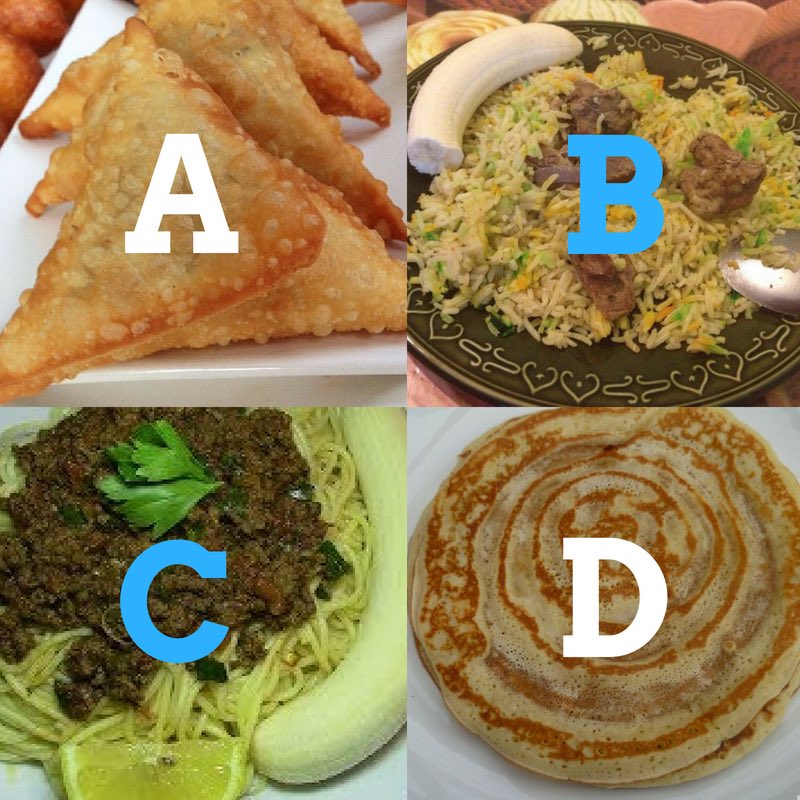 And I don't eat too many bananas[at least one a day] and only kids mush up their bananas. At least I don't add hummus to everything[ew no not hummus ;p].

Sawwrryy! ;p That's what happens when your mum hogs the laptop all day long then finally passes it over at 9 o'clock then there's the choice between sleeping and posting [which takes less than a second to choose between XD]

I don't even remember the last time I ate a banana lol ;p I don't add hummus to anything weirdo! I have it with olive oil and bread and it tastes so NICE! But hummus is Lebanese I think [or somewhere in that region] so YA! :3

I don't eat samosas with my moos never. Samosas are too greasy but chips with bananas are beautiful. ❤❤❤

"Eating too many bananas can cause some unpleasant side effects due to their fiber content, including indigestion and the need to go to the bathroom often, especially if you increase your fiber intake suddenly and don't drink enough liquids. Also, bananas are relatively high in calories for a fruit"

Bananas have always just made me happy. :)

Great to see one of your posts again!

I do believe 44# might have been a shot at Ruwayda LOL!

:3 My bad... I wanted to go to sleep guys stop attacking me!!! My sleep is very important to me! Plus I also wanted to delay Somalia on Mrs. Banana :3

Yes, it was XD I had to add a little flavour of Sassy's natural speech too :p Who else votes that Ruwayda should change her name to Mrs. Banana? :D

:O Does "moos" mean banana? Cus in Amazigh it means knife! XDDDD This is actually getting creepy now!

Must be some 1900s thing XD Just Kidding! Old stuff have always been generally better than modern stuff, no? ;p

That is a phrase from a new TV series “Manifest” about a plane vanishing for 5 years then just comes back, and the people get special powers, and the government tries to experiment on them.

Well...It depends I like some old and modern stuff

:S I feel like I've heard it b4 but ppl are so obsessed with Love Island they've rejected it XD

Actually! love Island is an example of why old things are better than modern things ;p