Hello! Today we’re going to look at a beautiful, small country in Western Asia. It’s also much richer than some of the Arab countries we’ve seen before, in fact probably one of the richest in the world, and it’s really famous. If you haven’t guessed it already, then continue reading ;p [still continue if you guessed because I’m sure you’ll learn something new]…

1# UAE is a country located in the southeast end of the Arabian Peninsula on the Persian Gulf, bordering Oman to the east and Saudi Arabia to the south, as well as sharing sea borders with Qatar and Iran.

2# The UAE’s oil reserves are ranked as the seventh-largest in the world, along with the world’s seventeenth largest natural gas reserves.

4# In 2011, UAE is ranked as the 14th best nation in the world for doing business based on its economy and regulatory environment, ranked by the Doing Business 2011 Report published by the World Bank Group.

5# Dubai International Airport was the busiest airport in the world by international passenger traffic from January to May 2013, overtaking London Heathrow.

6# Burj Dubai renamed Burj Khalifa in honour of the Emir of Abu Dhabi when it was inaugurated in 2010, 818m-high Burj Dubai has held the record for the highest building on the planet since 27 March 2008.

7# Burj Al Arab is not a religious or historical monument that symbolises Dubai’s excesses, but a hotel shaped like a sail. Shooting up 321m into the air from the man-made island on which it is built, Burj Al Arab, designed by British architect Tom Wright, is the tallest hotel in the world, and the first to have seven stars!

8# Dubai Creek, or Khor Dubai in Arabic, this saltwater creek reaches 15km inland. It led to the creation of a city of two parts: Bur Dubai to the west and Deira to the east. To get across, you can take an abra, a picturesque little boat, or use the pedestrian tunnel.

9# The two triumphant Emirates Towers (1999-2000) are a showpiece of modern architecture that marked a bold entrance into the 21C. The pair dominate the start of bustling Sheikh Zayed Road and, depending on where you are standing, they seem to change shape, lean towards each other or pierce the sky.

10# Dubai’s top attraction Wild Wadi Waterpark is incontestably one of the most impressive of its kind in the world. A multitude of gardens, wave pools, a network of waterslides including the 33m-long Jumeirah Scierah for an exhilarating 80kmph ride.

11# A temple of consumerism with a maze of shops, the three-storey Mall of Emirates is the most astounding shopping centre in Dubai, until, that is, the Mall of Arabia in Dubai-land is completed. You can even ski all year round in the indoor resort, never mind the desert all around.

12# The Dubai police fleet includes a Lamborghini, Ferrari and Bentley…[waste of money]…This is to allow them to catch speeders who can outrun other cars…[still a waste of money]…

14# A British man was sentenced to four years in jail in Dubai after cannabis weighing less than a grain of sugar was found embedded in the tread of his shoe. He was later pardoned.

15# There are ATMs in Dubai that dispense gold bars O.O

16# Dubai has no address system, no zip codes, no area codes and no postal system. For a package to be sent properly, the sender would have to leave proper directions to the destination of said package [lol]

17# Dubai has no sewer system, instead they use poop trucks to haul the entire cities’ excrement away

18# After the global financial crisis in 2008, many exotic cars were abandoned all over Dubai and its airport. Most of these cars were bought with easy credit during the boom and the owners were unable to meet car payments after job cutbacks due to financial recession.

19# In Dubai, you must obtain a “liquor license” to drink from the privacy of your own home.

20# People living over the 80th floor of Dubai’s tallest building in the world have to wait 2 extra minutes before breaking their fast during the holy month of Ramadan because they will be able to see the sun longer than those on the ground.[I don’t know anyone who watches the sky to find out but ok?]

21# The United Arab Emirates donated a laptop to every high school student in Joplin, Missouri, after the city had been devastated by a tornado.[what are they gonna do with a laptop and a trashed city? :p don’t even ask me]

22# In 1956, Frank Lloyd Wright wanted to build a mile-high building (528 stories) in Chicago. The World’s current tallest building, the Burj Khalifa is only 1/2 a mile high and was inspired by Wright’s design.

23# Originally the area was inhabited by a seafaring people who were converted to Islam in the 7th century. Later, a dissident sect, the Carmathians, established a powerful sheikdom, and its army conquered Mecca. After the sheikdom disintegrated, its people became pirates.

24# Threatening the Sultanate of Muscat and Oman early in the 19th century, the pirates provoked the intervention of the British, who in 1820 enforced a partial truce and in 1853 a permanent truce. Thus, what had been called the Pirate Coast was renamed the Trucial Coast. The British provided the nine Trucial states with protection but did not formally administer them as a colony.

25# The British withdrew from the Persian Gulf in 1971, and the Trucial states became a federation called the United Arab Emirates (UAE). Two of the Trucial states, Bahrain and Oman, chose not to join the federation, reducing the number of states to seven.

27# Before the 1960s, food consisted mainly of fish, rice, bread, dates, yogurt, homegrown vegetables, and meat from sheep, goats, and camels. The diet has improved in quality and variety, with modern supermarkets offering imported foods.

28# Social customs are shared throughout the Gulf Arab countries. An Islamic greeting is the most appropriate, and men follow this with a quick nose-to-nose touch while shaking hands. Women greet each other by kissing several times on both cheeks. Men normally do not shake hands with women in public.

29# It is customary to ask about the health of a person and his or her family several times before beginning light conversation. Refreshments usually are served before serious matters are discussed.

30# Islam dominates all aspects of life. Most Emiratis are members of the Sunni sect. Matters relating to marriage, divorce, inheritance, economics, politics, and personal conduct are affected by Sharia (Islamic) law.

31# The UAE national day, 2nd December, is the most important secular celebration. Cities are decorated with colored lights, and folklore troops perform in heritage villages. 1st January is a holiday but is not celebrated by nationals. Expatriate communities celebrate their own religious and secular holidays.

32# The state generously supports writers, painters, actors, and folk dancers. Sharjah is particularly active in promoting culture and was chosen by UNESCO as the Arab Cultural Capital in 1998. [Sharjah is one of the most beautiful places I’ve probably ever visited] 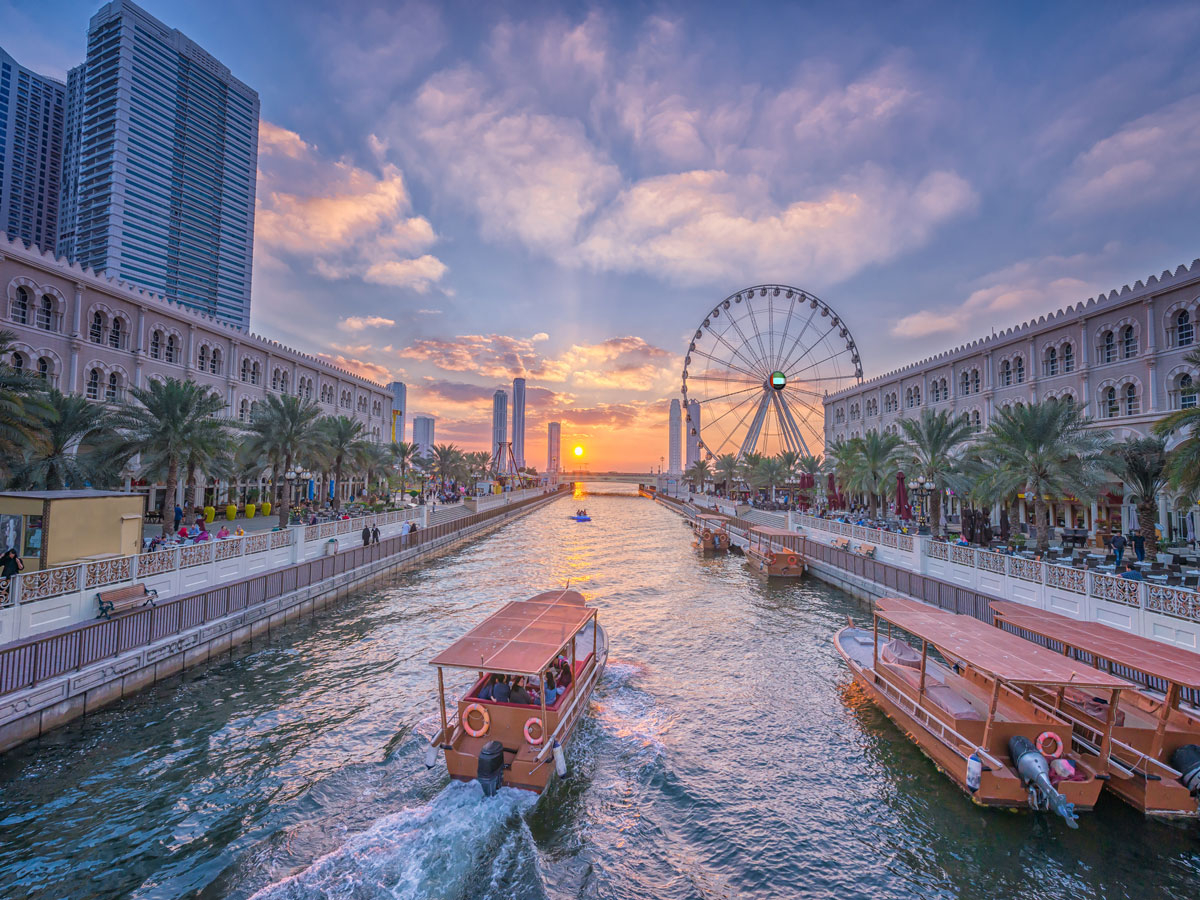 33# Conservative elements of the society still impede women’s participation in performance arts. In 1999, the first college for theater arts opened in Sharjah. Emiratis rely on theater and television programs produced in other Arab countries [mainly Egypt and Qatar I think]

34# There is more than one Royal Family in the UAE. Unlike other European countries or Japan, the UAE has, in fact, more than just one royal family. Each Emirate of the UAE is ruled by a different royal family, with the most famous and powerful of them being the Al Nahyan royal family of Abu Dhabi and the Al Maktoum royal family of Dubai.

35# The UAE is made up of Emirates, each ruled by a family with a distinct culture and history …Speaking of royal families and Emirates, the UAE is in fact made up of seven different Emirates, each of which have different ruling families, cultures, traditions and even dialects. It was only in 1971 when the Emirates finally did come together to form one United Arab Emirates and became the country that it is today.

36# The expat community makes up almost 80% of the entire UAE population - Another fascinating aspect about the UAE is the huge number of expats who move here for business, fashion, entrepreneurship and much more. Making up almost 80% of the entire population of the country, they help make the UAE one of the most international and culturally colourful places in the world.

Thanks for reading! I hope you enjoyed today’s post or learnt something new ;) CYA guys tomorrow when we’ll be looking at our last Arabic country…

Have a great summer holiday! :D Anyone else going anywhere?

For 13#, are we gonna run out of electricity that we can't fuel our own cars and we'll go back to the Medieval Times?????

Other than my theory[yes that's what I'll call it], nice post. My Year 3 teacher abandoned us for the luxury of Abu Dhabi. Can't blame her.

Yep! That'll be awesome! :D Oh wait... Half the countries in the world don't have electricity from he first place XD That means we're gonna swap so that the rich ppl feel what poor ppl feel ;p Just imagining Trump climbing the wall to get to Mexico XDDD

Lol! My Arabic teacher ditched us for Dubai and my old Maths teacher is leaving today to go to Dubai too XD So popular and I'm not surprised

Tomorrow is the last Arab country? Wow, How the time flies. It seems like you just started this series.

o.O I was wondering what you guys would like me to do after this... Maybe I could teach some common dialect words or words that are shared between all dialects

That would be fun!

Do they have stories in Arabic on Duolingo? :o

Just checked, No they don’t.

Nice! Thanks for doing this series! Would you be able to make an index to link to all your posts? Or let me know if you've already made one :-)

Hi Oliver, If you click on her profile picture she put a master link in her bios.

Yup! Just updated it too :)