Translation:I need to put the clothes in the suitcase.

There should be a conjugation button for pôr considering it is an irregular verb.

I suggest you use wikitionary for conjugation and also etymology, i use it for all the languages I'm learning, it's great

Why doesn't Duo accept "case" as well as "suitcase". In British English we more commonly use "case" for "suitcase".

Can't I say " I need to put on the clothes in the suitcase? "

no, that sounds like you would get dressed in the suitcase

To an English speaker that sounds natural, simply that she needs to put on the clothes (that are) in the suitcase.

I put this as my answer too and got it wrong. Can anyone comment on how I'd say in portuguese that I need to put on the clothes that are in the suitcase? Here one of the translations of "por" is put on which is why I thought it meant to put on the clothes, but here it's closer to colocar. How would I tell the difference?

And yet, another sentence in this Infinitive Verbs module is, Ela quer pôr a saia (She wants to put the skirt on):

indeed, I was wondering about this too. Is this simply because of context?

So "Eu preciso vestir as roupas na mala" would be "I need to put on the clothes [that are] in the suitcase?

What is the difference between colocar and pôr?

They are exactly the same. But most of people use colocar instead of pôr since it is easier to conjugate! =)

Also the verb pôr sounds exactly the same as the preposition por, which is quite annoying sometimes

Well... The preposition 'por' can have both pronunciations to be fair, so in a way, both of us are right... And I am brazilian btw

More idiomatically, in English we would say "I need to pack."

But "case" can also mean "situation" or "type/size of letter". So in this case use UPPER case.

Oh! I learned these as something else. Caixa alta e caixa baixa which were named after the typesetting that used to be done for printing. The letters had to be set by hand and each type (as well as font, and point size) was stored in a case (or for Portuguese, a box aka, caixa which sounds more like case than box...).

Turns out the English also uses the Latin derivatives: majuscule and minuscule (which comes from minus aka menos in PT), from before letters being put in boxes (pre-printing).

Yes, at work people used "caixa alta" and "caixa baixa". Maybe it is used in work environments, at least those which use languages? =)

Maybe. Though it seems in English at least I have always known them as upper case and lower case which makes some sense since it comes from the invention of the printing press with moveable type (which I was just reading about) is from 500 years ago now (just recently):

And the typewriter (which led to our modern computer keyboards) eventually had upper and lower case keys:

But in reality, letters are called capitals (also, caps and big letters) and little letters most of the time:

At school (learning to write), in graphics and printing, and no doubt journalism and translation are where these terms would dominate. Moveable type though is a thing of the past (as is almost everything else). There is a Peace Monument at the North/South Ledra Street border in Cyprus that uses large moveable type as its focus (no longer any other need for it). 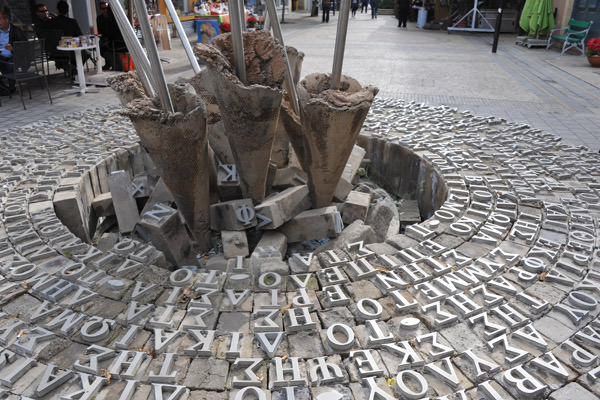 Interestingly, capital (the word) is related to capitão (which originally came from caput for head), as the land given to the captain of the ship who discovered new territory (at least in Brazil) would often become the Capital City for the area. Some incentive.

English is heavily influenced by Latin. Grammar, vocabulary (a lot borrowed by le Français, no less) sentence formation. All that despite being a Germanic language. That's why I call it the "oddball" of its family.

why is por used rather than colocar instead?

Both options are correct.