I keep wondering which modern language and strain of accent comes closer to both classical Latin and sermo vulgaris, maybe romanian, catalan or castillan... but the english accent really seems off.

Yeah, the American accent (together with the new "classical" pronunciation) is pretty jarring to me as well.

Czech actually has quite similar word stresses as Latin. And the grammar is quite similar as well. Or, at least it has declination, conjunctions, and so on as well.

Brazilian portuguese actually is reeeeally really close! Even the pace is the same!

I can vouch for this. I studied Latin for five years, academiclly. Hosted an exchange student 4 years ago, for holiday, his parents visited. I was able to converse with them speaking BR Portuguese and me speaking Latin. My student's mind was blown.

Just curiosity, but did the Romans use our types of punctuation? Is the question mark a thing they would have used or would they have indicated it another way?

We think that they didn't. They didn't even put spaces between words for a long, long time. Roman-era Latin monument inscriptions sometimes used a little dot (called an interpunct) between words or between phrases, but it's been argued that these were added after the lettering was finished so space was not left for them.

The evidence for classical Latin is a bit tricky because most of our long Latin texts come to us via medieval copies, not directly from Roman times, so they have been re-written into the spellings, punctuations etc of whoever copied them. Our evidence about the Romans' Latin is more from shorter fragments of language like what you find on monuments and surviving bits of graffiti, correspondence, art and signage. Some of the monument inscriptions were changed by later people, too.

"We think that they didn't", so is there a doubt about it? 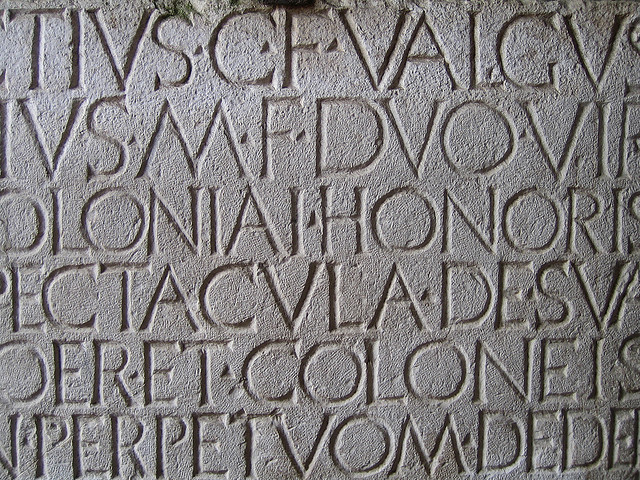 Is agit a form of the verb to be?

No it is a form of the verb "ago, agere, egi, actus- to do,drive" . We get the English words actor, react, agent, and more from this word. Hope this helps :)

So a literal word-for-word translation would be "What's Stephanus doing?", is that right?

Yes, agere is often "do." It's a very generic verb that's used in many different situations.

You get marked wrong if you translate it as "what is stephanus doing?" though.

Yeah, even though that's (to me) the more natural meaning. For example, when some buddies of mine at university would try and speak Latin with each other, we would say "Quid agis?" for "What are you doing?"

What the difference with "Quid facitis?"

A basic rule in translation: always account for context. The context here is the lesson topic.

I disagree. In Duolingo, the non-written "rule", so far (I attended many different courses here) is to translate in every possible ways. The lesson context is artificial, as some lessons doesn't fit anywhere.

When a translation is possible, even with a different context, Duolingo adds it. Sometimes, it takes some time and reports.

I don't see why the Latin course would have a different behaviour than the rest of the languages courses here. And it's good, because it forces us to think in every possible ways, and to think about all the different meanings for a sentence.

"What is Stephanus doing?" is no longer marked as wrong. February 2020

"How goes Stephanus" might be closer to the spirit of it

So the translation could be similar to the English "how do you do, Stephanus?"

How is Stephanus doing?

How are things going with Stephanus?

Agere is the infinitive of agit and basically means to do.

The pronounciation of Stephanus varies between lessons. Is it pronounced with a p sound or with an f sound?

The discussion boards show a lot of complaining about pronunciation and Duolingo says that they use classical but clearly they aren't consistent about it.

The 'h' in Latin works like an aspiration marker not only after p, but also after t. 'Th' and 't' are like θ and τ in ancient Greek. Latin p and ph correspond to ancient Greek π and φ (modern Greek has different sounds).

Why isn't "Stephen" an acceptable translation of "Stephanus"?

From the Tips and Notes for the Intro skill

"Translation of Names A little convention: we will not accept translations of names as alternatives in this course. Marcus's name is Marcus, not Mark, and Stephanus is not Stephen or Steven."

weird because in the first chapter it allowed Stephan.

And because Stephanus is a translated Greek name.

Stephanus is alright. It's very sweet of you asking.

Shouldn't it actually be 'quod' since 'quid' is an adjective modifying a noun?

Can someone explain me what "agit" means? and how to use it?

Here's a really great link to a tool that declines or conjugates Latin words:

There's a link there labeled 'See the translation of this word.' You can click back and forth between the translation and related words on the one page and the various forms of the word on the other.

Can someone clear out if the PH in Stephanus should read as F ( as F in False or PH in phone) , or simply as P (as in Part)? I've seen both pronunciations in the lesson and wondering if there is any consensus.

Look above in this thread for your answer.

I have long been under the impression that Latin is not a spoken language, and whether it is or not there's no way of telling how the ancient Romans pronounced anything. Anyway, why does it matter, lacking any rational standard? If you are actually speaking Latin with a group of others, consensus would be just fine. In my opinion, of course.

Quid means what or how

How is Stephane should be accepted when the translation is into English, surely?

My understanding is that the Latin course wants you to use the nominative form of the name in Latin when translating into English. I assume the reason for this is that it would otherwise be difficult for the app to track all the variant spelling possibilities.

Why is it now agit instead of est?

I agree, and you've stated it well. But the expression is "How is S. doing?" not "What is he doing?"

I thought quid meant what not how.

I like the accent of the guy who says: vates libros sacros legunt!

Wrote Stefanus instead of Stephanus. Lel.

"What is Stephanus doing" was not accepted. Why?

Why does "quid agit" translate to "how"?

Because we are translating an idiom, not word by word. "What's up?" means the same as "How are you?" - it simply has a different register (degree of formality). But that does not imply that "What?" means "How?" (nor does it refer to enquiring if something is in the air or overhead!) So, "Quid agit?" means "How is he?" but "Quid?" means "What?"

There are a audio error is someone heard that too

I think 'agit' in the Latin form means something else because it was rate a new word, still no new thing in the English translation, except that 'quis' means how. I'm confused please help. What does agit mean?

I am Italian and studied Latin at the high school: actually the pronunciation of "agit" should sound like "ajit" the "g" sound in Latin and Italian is sweet like in the word "Jenny" whenever g is followed by i or e. If g is followed by vowels a, o, u, then the sound is hard like in the English word "garden" To make the g sound sweet with i, a and u you have to add the i after the g: like "giardino" "giustizia" "giornata"

Whats the difference between quis and quid?

Quis, quid is an interrogative pronoun, used in questions, whether direct or indirect; basically, quis means "who?", "what person?", and quid means "what?", "what thing?", in the broadest, most indeterminate sense possible.

b. Quid arbitraris? = "What do you think?" (direct question)

d. Dicam tibi quis mihi hodie praestaturus sit cenam: tu = "I will tell you who will give me dinner today: you." (indirect question)

e. Quis nostrum hoc ignorat? = "Who of us is unaware of this?" (direct question)

Note that when, in English, "what" is used adjectivally (i.e. together with a noun, as in "What animal is that?"), one does not use quid in Latin, but the appropriate form of qui, quae, quod according to the gender etc. of the noun (see A.1.2)).

Quis, beside its uses as a pronoun, may also be used adjectivally with a masculine noun, much like qui, as an interrogative adjective (see A.1.2)), would be. E.g. Quis finis erit huius belli? = "What end will there be to (lit. "of") this war?" The same thing does not happen with quid and neuter nouns; it only happens with quis and masculine nouns." http://latindiscussion.com/forum/threads/qui-quae-quod-vs-quis-quid.25914/