Pete Townshend and the Quis

Haha I was singing that too

Edit: this little tune has been so helpful in remembering the definitions!

I am a Duolingo learner. lol

I probably have a bad question but would it be acceptable to speak it in a different accent. I speak Portuguese (Brazil). So can I pronounse it the same way a brazilian would?

Latin has many pronunciations nowadays (because it's mostly used in text actually), from what I understand the people who made this wonderful contribution here are using (so far) the Classical Pronunciation - like the Ancient intellectual Romans did, in Brazil when people teach Latin they either go with the Ecclesiastical Latin (id est, the pronunciation that is used by Roman Catholic church and it came from a vulgar form of pronunciation of Latin) OR they go with a "regional" vulgar Latin used historically by Portugal (and there are other "vulgar" forms, there is a Anglo form, a French and a German and probably many others)... anyway, except if you are a faithful catholic, I'd recommend you to strive to use the Classical Pronunciation by all means.

Why the classical one is recommended?

Because others either don't have standards or are only used in certain specific contexts (e.g. ecclesiastical Latin)

I don't think so, many countries in Europe still use ecclesiastical Latin to teach to students, in schools. Every country has its own tradition. It's a bit English-centered and religion-centered to think that everyone teach with classical Latin. Catholic countries tend to use ecclesiastical Latin. Many countries in Asia too. Ecclesiastical Latin seems to have a broader use than many people think, because they never met it anywhere, it's a cultural and religious difference that should be respected. I don't have anything with any kind of Latin, it's cool to know the differences and both have advantages and disadvantages. That's not true to say that one kind of Latin is superior to the other, or that people should learn only one kind. It's a choice, and its subjective. It depends where you are in the world and what you want to read.

For instance, ecclesiastical Latin has the advantage to allow to read theology, protestant or catholic or European philosophy, or to include modern words, and it has standards and scholars, as it was taught by the vaticaneses and the jesuits, read their courses! Anyway both, classical and ecclesiastical one are not 2 separate dialects, they are the same, and if you want to talk about Christianity or modern religions in Latin, you will have to include vocabulary from ecclesiastical Latin, even if you are not a catholic. If you use modern words too, you will use a lot of ecclesiastical Latin terms...
The classical Latin has the advantage to be taught by prestigious universities around the world, with a lot of fun and modern teaching materials. Maybe other benefits and disadvantages I'm not aware yet.

Where are you from?

With all due respect, so far no one has even as much as suggested in the discussions that the classical pronunciation is "superior" to any other. Why would you think that setting up a straw man like that would help your argument?

I think that this whole confusion about which pronunciation out of the many historically established to adopt stems from the fact that "Latin" (as a linguistic concept) allows for a broad definition which also subsumes Ecclesiastical Latin used in the Middle Ages mainly in religious but also political contexts with undeniable historical consequences up to the present day.

To define "Latin" narrowly may be a bit tricky but the safest thing to do is to simply equate it with Classical Latin, which was clearly pronounced in a way different from her later, medieval avatars.

Now, based on my own experience to learn the classical way and then switch to the ecclesiastical way is as easy as pie. To do it the other way round is to practically unlearn everything you know and start over learning another language. (Eg, pater has a short 'a' and mater has a long 'ah'. Learn it that way and then just pronounce them both long in ecclesiastical because they are stressed ...easy... try learning this backwards... pain...That is why people don't do it and I don't blame them). Why would you not learn two varieties in one fell swoop if you can instead of just one?! Just for the record, I do not mind whether you do or not, suit yourself :).

Because the other versions don't sound as cool

oh, I almost forgot to tell you: you can easily find on Youtube (in English), how to pronounce Latin in the Classical manner.

You studied French, it's the same "tu es" in Latin, and "tu es" in French.

It's the only conjugation of sum that works in this sentence. Present tense, active, 2nd person, singular.

Pronouns are unnecessary, and, in fact, discouraged, unless clarity or emphasis is needed (as I've noted in other comments). This sentence could simply be, "Quis es?"

I would not go so far as to say "discouraged", especially in short questions like this one. Seneca wrote "quis es tu?", Plautus, Varro, Terence, and Cicero all wrote "quis tu es?". In fact, among the classical and earlier writers there are dozens of instances of one person asking another who they are, but just two examples that I can find, both in Plautus, of "quis es" without a pronoun.

Can somebody just tell me why you can use "es" and "sunt"and for "are"?

In Latin, the subject pronoun is pretty much always optional. The verbs all conjugate uniquely to the subject, so the verb carries that information.

And for good measure, here is a plain-English overview of what the cases are and how they work:
Latin cases, in English

Adjectives must agree in gender, number, and case with the nouns they modify, but they have their own declensions. Sometimes you get lucky and the adjective just happens to follow the same declension as the noun, but that is not a guarantee.

As you said you were dead, I wanted to write "Mortus es?" but I realized it doesn't mean "Are you dead"? A webpage told me it was an insult, is it true?

Yes, it is "mortuus es". "Ego mors sum" means "I am the death". "Tu mortus es" comes from a graffiti on a wall in Pompei. Those graffiti's were often misspelled. It probably is a threat, an insult : "You're dead", something like that.

I tapped on the "you" button and it didnt go up

No one here can do anything about that. Next time this happens, take a screenshot and file a bug report:
https://support.duolingo.com/hc/en-us/articles/204728264-How-do-I-report-a-bug-

There is also a troubleshooting forum:
https://forum.duolingo.com/topic/647

Some of these words are the sane in french like tu

No surprise there, since French is one of the languages that Latin evolved into. Italian as well.

What is the difference between es and est?

Quoting other comments on this page:

People, first of all sorry for the off topic, but someone would know where are the TIPS texts of the Latin course? I can't find them anymore

But as long as we're here, the tips are available on the website but not the mobile app. Different teams. ¯\_(ツ)_/¯ 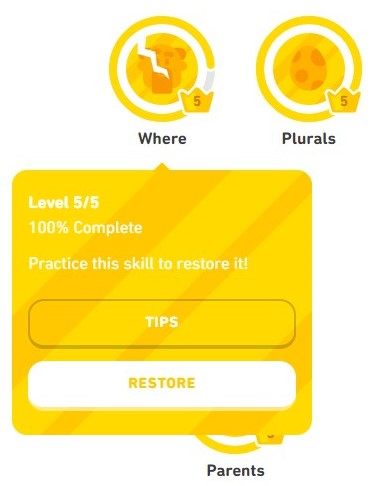