Translation:The lararium is in the house.

Villa doesn't mean any old semantically underspecified 'house'. It specifically means a large country house or a rural farm house together with all the associated farm buildings. If you're going to translate villa as 'house', it should at least be qualified as a 'country house' or a 'farm house' vel sim.

Indeed, if you've watched Time Team, you'll know what a villa is. Domus might fit both as house and home.

Come on DL, translate lararium into “shrine” or something equivalent in English.

No. It's definitively not the same than a "shrine". Duolingo is right.

A shrine or a temple is a place where you enter, like a church, right?

But you cannot enter a lararium, it's more like a shelf, a household altar, a mini temple that you would put on a shelf, or an alcove. So, really, a shrine and a lararium aren't synonyms. 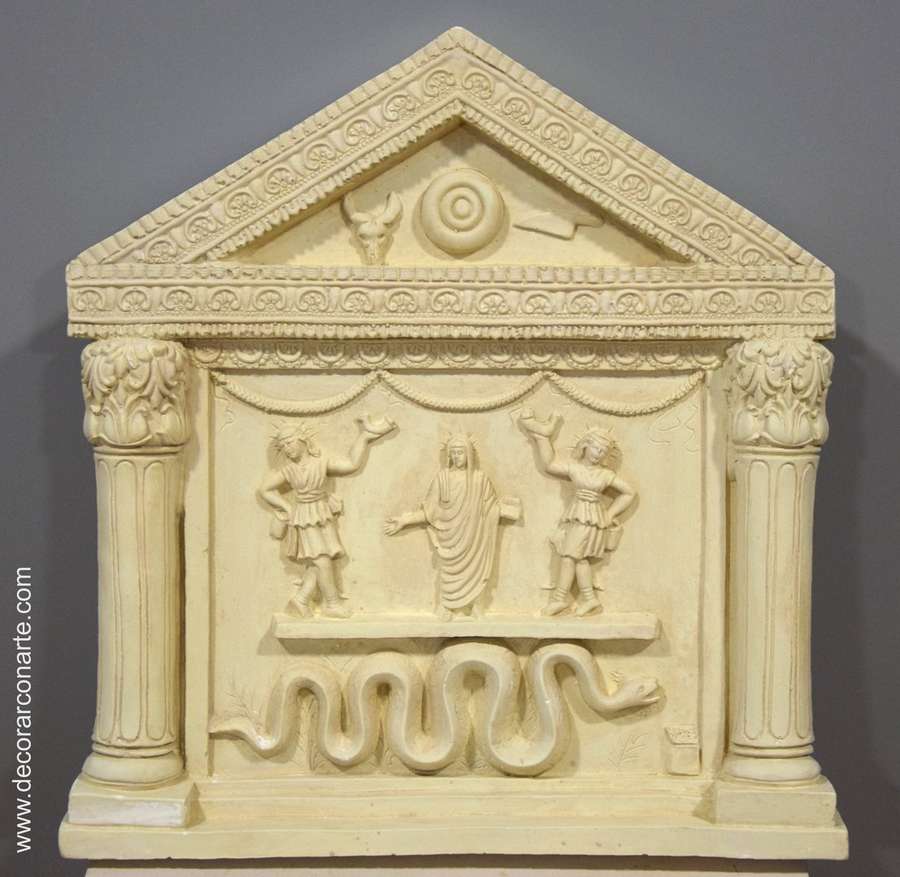 Would you describe that as a "shrine" alone?

It's maybe closer of some church shrines, but definitely, it needs to mention it's something that is always found in a house. It belongs to the house.

A shrine can be anything from a small box to a big building. In some homes it was nothing more than a plinth or a painting with a couple of figures. Being able to walk into it does not seem to be a prerequisite for something to be defined as as shrine.

I was in the Hunterian museum in Glasgow a couple of days ago and there are a few stone columns described as “altars or shrines” to Mars, Victory etc. that a particular soldier had in his home. There are possibly many more in existence but the Romans either took them away or buried them when they left (5th century AD for Britain, but they gave up on trying to conquer Scotland in the 2nd century).

Yes, but it is not the meaning here. It is not a building.

It's not possible to enter a lararium, and "shrine" is not the best translation, as it's way too broad. It's really a specific kind of shrine. Why using an approximative translation, included other meanings, when there are good expressions in English?

As far as I can see, Duolinguo accepts NO English translation for "lararium" except...lararium; which -- despite whatever obscure citation you may be able to produce -- is certainly not a common word in English.

Meanwhile, it is certainly common and normal English to speak of people erecting a home "altar" or a home "shrine," and these expressions refer to a place in the home that is a locus of prayer or devotion. Such a home shrine or altar might have statues, images, a cross, and candles, and the like.

A lot of the English translations here are rough.

No, the word "shrine"can describe a large building or a very small focus of devotion. The word "lararium," if it is used in English, is extremely rare, so an alternative needs to be found. It sounds to me like what we might call a "household shrine," or in contemprary English, a home "altar." Many Catholics have such shrines in their homes to this day.

Agreed. A shrine is not by definition a walk-in building. It is simply a site of devotion. I never see the word "lararium" used as the English for household shrine. Many religions use them, and it's always simply called "a shrine." It needs to be accepted in this course.

Yes, "shrines" in general, but NOT lararium.

It's not any kind of shrines, it's only a household/family shrines. It's a very specific meaning, it's not shrines in a temple.

The lararium is made for the Lares, the gods of the house.
Translating with "shrine" is a very imprecise translation, as it includes meaning that doesn't exist in "Lararium" and doesn't include meaning that is in "Lararium".

The word "lararium," if it is used in English, is extremely rare,

Absolutely not, when you describe the household shrines for the Lares (= definition of the Lararium), it's always called a lararium in English. Please show me other words that can describe the shrines of the Lares gods. Because it is the meaning here, it's not any shrines.

The lack of precision of such translations confuse you on the meaning. You suppose that it's any kind of shrines, it is not.

To sum up: if you say a shrine in the English sentence, there is zero reason to translate by "lararium" in Latin, as "lararium" is a very special kind of shrines. It likes if you wanted to translate "animal", with "cat", or "car" with "Ferrari". Shrine is the general category, not the item, and animal is not a synonym for "cat". A cat is a kind of animal, and a Lararium is a kind of shrine.

That's the danger with such translations = to confuse.

If you have "lararium" in Latin, it means a lararium in English, if you refer to the Latin culture (and it's a bit the purpose of this course!. If you transpose it in our modern life culture, it can means a household shrine, by analogy but nothing more.

The word "lararium" is rare in English, because I don't know many people who worship the Lares gods nowadays (it may exist though).

Household shrine would suffice; if you have a Ferrari and someone said " the car is in the garage" we would understand the meaning. If you say the "household shrine is in the villa" it would be understood that a place of offering (usually to a deity) is in the home, you have communicated well. If you said to most English speakers the "lararium is in the villa" they would not understand as 'lararium' is a Larin word and not frequently used; you therefore have not communicated well.

The whole purpose of language is communication and whilst precision is key and opens up our understanding of the Roman way of life if we pursue it in this instance, it could hamper understanding; you are relying on the receiver of your English knowing a very specific Latin term that is rarely used in everyday conversation. I am a native English speaker of more than forty years and I have only learnt what a lararium is by doing this exercise, otherwise there would be no reason I would encounter the word. If you told me there was a shrine in the house, however, I would understand what you mean, and would have done from being a child.

Why Duo is telling us a household shrine is in the house (!) is much more of an issue; as is their use of 'villa' to communicate house when this is a much more widely used word in English which would not conjure the same image as the simple 'house'.

"Please show me other words that can describe the shrines of the Lares gods."

How about "Lares shrine"? >

Maybe they could include «casa», which was the Late Latin/Medieval Latin term. It originally meant “hut/cottage” and later came to signify any house or dwelling.

a villa isn't a "house"; it's a large country house, working farm house with agricultural or manufacturing spaces or large urban house. So the translation for villa should be villa.

Yes, but the broader category is "house", so, technically "villa" is also a house (but not every houses are villas). But it's probably better to leave it untranslated as a "villa", I agree, as "house" loses some of the meaning of the Latin word.

Indeed, anyone watching Time Team would know the villas they excavated are the equivalent of manor houses in the countryside, not regular houses. Even modern villas are grand houses, even if somewhat smaller.

While "lararium" is hardly an English word, villa actually is.

Lararium is also an English word, when you want to talk about a household altar for Lares gods, you have no other choice than using "lararium".

Why is it all about the lares her, while the penates are not even mentioned? "In Roman mythology , Lares and Penates were groups of deities, or gods, who protected the family and the Roman state. Although different in origin and purpose, the Lares and Penates were often worshipped together at household shrines.

Lares were considered spirits of the dead who had become divine, and they guarded homes, crossroads, and the city. Every Roman family had its own guardian, known as the Lar familiaris, to protect the household and ensure that the family line did not die out. Each morning Romans prayed and made offerings to an image of the Lar familiaris kept in a family shrine. Deities known as Lares compitales (pronounced LAIR-eez kom-puh-TAY-leez), who guarded crossroads and neighborhoods, were honored in a festival called the Compitalia. Another group of deities, the Lares praestites, served as the guardians of the city of Rome.

The Penates, originally honored as gods of the pantry, eventually became guardians of the entire household. They were associated with Vesta, the goddess of the hearth or household fireplace. The main function of the Penates was to ensure the family's welfare and prosperity. The public Penates, or Penates publici, served as guardians of the state and the object of Roman patriotism. According to legend, they were once the household gods of Aeneas, the mythical founder of the Roman Empire."

What's the meaning of lararium?

Lararium - Worship location. Prayer area. Devotion locus. Anything like that would at least be in a normal dictionary. I'm sure the Lares wouldn't mind.

I just love this speaker! He sounds like an old, revived, Roman senator.

Also, Latin verbs are mostly placed at the end of the phrase > Lararium in villa est. Is there a reason the Latin word order isn't followed?

Even google translate does not know what lararium is. Please use the words that exist in English.

Everytime that I typed "Larario est in villa," Duolinguo told me that I was typing in English. I had to intentionally get it wrong to progress.

What the heck is a lararium? Is that even english?

Keep your minds wide open, and don't insist that everything has to conform with what you already know. So many people in Duolingo comments seem unnecessarily touchy about the tiniest things. What is the problem with learning new words? Do you think you have already mastered the entire English vocabulary? You haven't. Does an infant learning a new language complain when a new word or concept doesn't fit their prior knowledge? I prefer to approach language learning like an infant: uncritical and sponge-like. Adults hinder their own learning by being unnecessarily critical.