The course just literally defined 'homo' as 'man', and now it doesn't accept it: 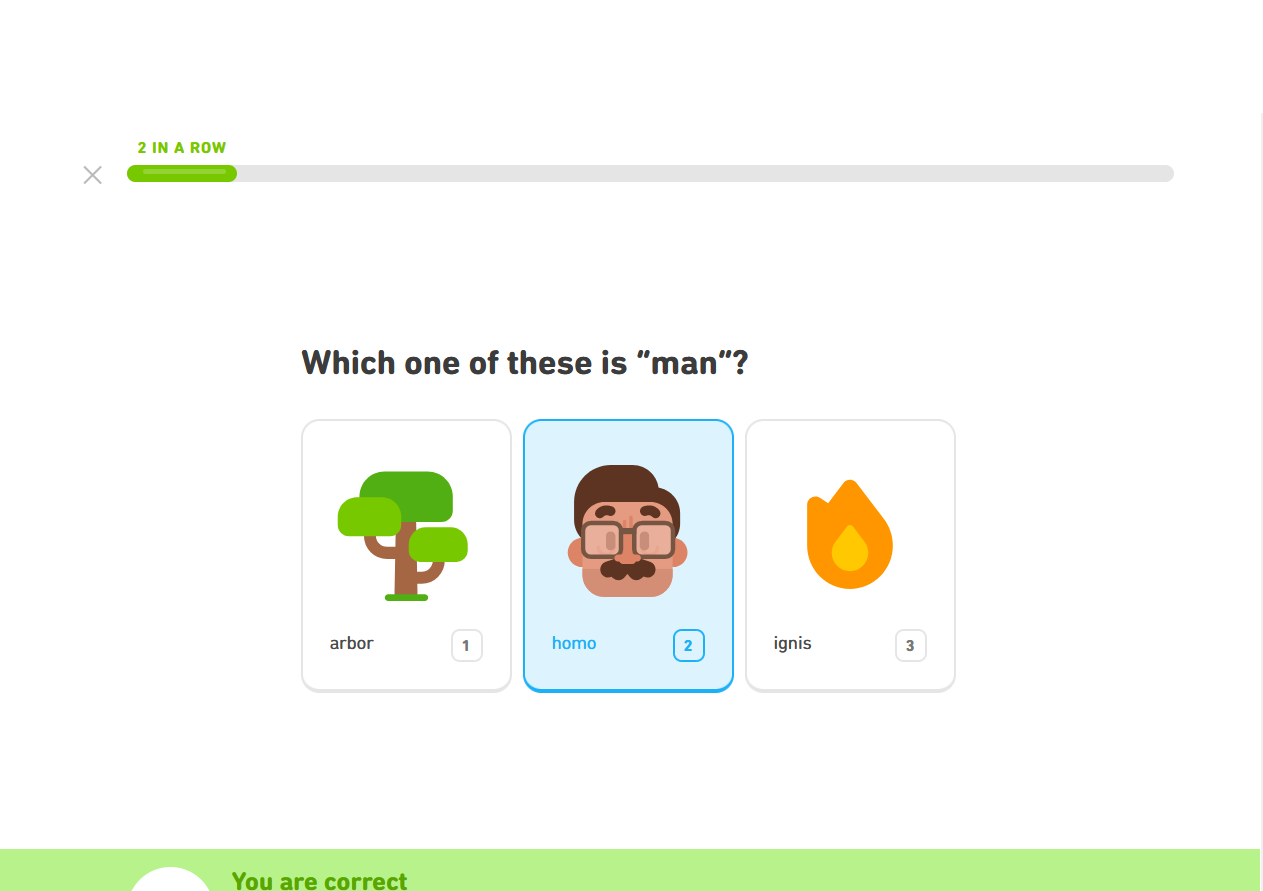 I noticed that too. Homo shouldn't show a man, but an undefined human being.

Please, make your report in the forum, or with a report form.

Never get on the wrong side of Minerva

That is the Vulgar Latin pronunciation of hominem.

What do you mean, the silent h? I got this as a "type what you hear" task, and thanks to the speaker's careful pronunciation, I typed everything correctly except for not including the h and writing an m instead of the l in "delet." It was one of the first tasks in this skill and I had no idea of what was being said!

Irreverent, wicked, faithless, unscrupulous. Plenty of choice. And this guy has offended a god. I doubt if undutiful is the go-to adjective. I'm not even going to get into a discussion about whether I should be destroyed for thinking the word "man". Minitru is alive and well.

Why destroy a human and not killing him? To my understanding destroy should be used for buildings etc

It's right, but in this case, it means that only a little pile of trash remains of the former "man".

You can kill someone with a gun, and destroy them or annihilate them by the fire or a bomb.

Or in other ways, such as reputational damage, for example; or through madness.

Bless be Minerva and all her beauty. Please don't smite me xc

It's tricky not allowing "man" as a translation.

fwiw, i hear the word "man" used in a gender-neutral way all the time. It's used to mean mankind, humanity, etc.

modern day "feminists" take offence to all of that even the word woman is not allowed because the word man is in it.

I agree that some feminists hold the views you describe. And, it is irritating. Ignore all downvoters. You are entitled to your views.

Because it's not "man", it's human being, so it's normal.

"Man" should definitely be allowed here because it signifies a man in opposition to a goddess.

What is a Minerva?

She is a Roman goddess equated with the Greek goddess Athena.

She's the Roman goddess of wisdom and strategic warfare. She has also got a bit of a nasty temper.

It accepted this answer for me. Are you sure you didn't have a typo? Or was it just added?

Because it's the beta period, they're accepting suggestions quickly. I've had over 30 emails about my suggestions for this course.

I am sure — I used word bank to input the sentence ("an" just happened to be one of the words listed).

I clearly hear "ominem", not "Hominem". Is this H pronounced or not in the classical reconstructed pronunciation? Thanks.

The only safe rule for the English reader is to pronounce Latin h as such wherever he finds it in his modern texts (except in humerus, humor, humidus, ahenus, where it is certainly out of place). He will thereby be following, with perhaps even greater consistency than the native speaker, the habits of at least the most literate levels of classical Roman society. Between vowels it is probable that h was subject to voicing - a tendency that is also prevalent in English (e.g. in the pronunciation of behind).

However, in this case we have the added complication of elision. This seems to have been ignored in all the speech samples in this course but it is very important in Latin poetry and was almost certainly a feature of everyday spoken Latin too. Generally if a word ends in a vowel or an m and the following word begins with a vowel or an h the final syllable of the first word is dropped unless the second word is es or est in which case the e of the second word is dropped.

Note also that final m should not really be pronounced, regardless of elision. It served only to nasalise the preceding vowel similarly to what we hear in modern French. This also is not apparent in the speech examples. So the way I would pronounce this sentence, with the u of impium nasalised, is:

Thank you. So interesting!

How do I get the only option incorrect? I chose the right anwser but the option is a typo