Translation:You walk to the lararium.

Come on DL, ”lararium” is not an English word. Please accept:

“You walk towards the shrine”

It's not a shrine, it's a household shrine (see the difference? It's not a building at all. It can be a room or even only a shelf.)

Nowadays, some people have altars at home, for various religions, but lararium is used in English too, when you need describe that kind of shrine, not very common nowadays, and when it's specifically a Roman altar. Everything that is part of the Roman culture, and not part of our modern culture, can be used with the Latin word.

I think home altar, and family altar could be right too. I will suggest them next time. 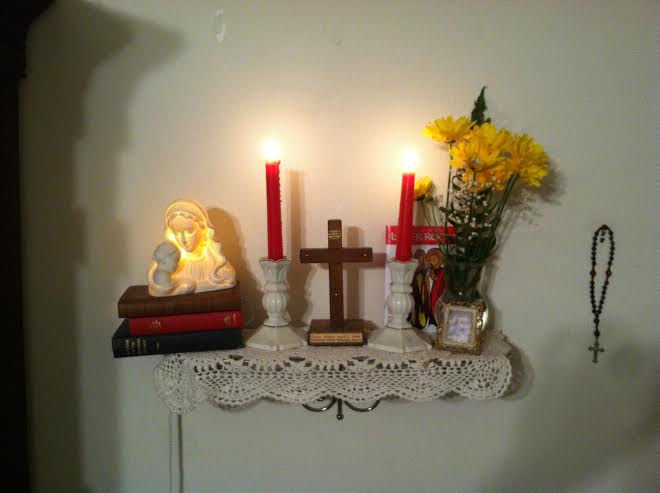 Christian home altar, only a shelf.

Buddhist, not a building, not a shrine.
A worship place in the house, considered as holy. 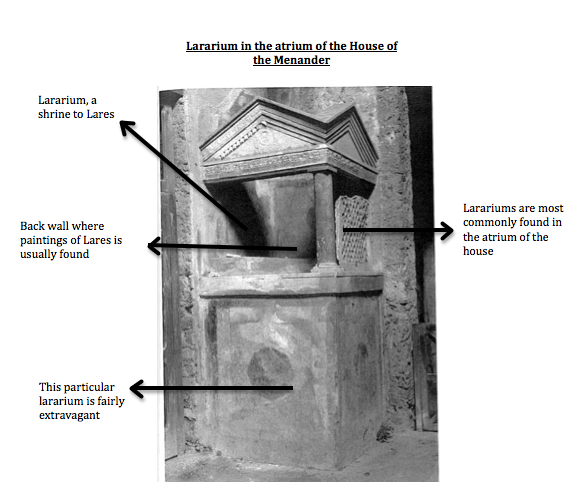 Roman An empty lararium here, the statuettes are missing.

As you can see, it's very specific.
So "lararium" can be used in English or its translation.

Of course, if you mean a Christian or Buddhist altar, the English word will be better in this context.

Perce, thank you so much for this glimpse into Roman culture as well as the photos and explanations.

Perce, all you listed would also count as "shrine." I agree with sousquark that lararium is not a very common English word and that people also have shrines in their homes, without these being separate buildings.

If villa is being acceptably translated as house, then lararium can be translated just as acceptable as shrine.

Sometimes, a rough translation is as good as it gets. Regardless, using lararium in the English sentences is just plain broken and confusing.

To my ear, a shrine is typically not a building. The first thing I think of is a roadside shrine (not a, nor in, a building), then a home altar, and only as an exception to the rule, a small religious building. As many, many people have noted here, insisting on using "lararium" in English is annoyingly pedantic. Shrine is an excellent translation, as is home altar.

Thank you for your brilliant explanation!

Before you, i didnt know what lararium meant

Go instead of walk is not accepted.

Is there a difference between go and walk in English? (non-native-speaker here)

Hey guys, please don't downvote sentences just to "say no" or to show that the person posting has made a mistake. Many people think downvotes equate to showing disagreement or disapproval.

I did. That's true that sometimes people downvote the sentence because it was hard/because of the audio/because they didn't like a word/because their version wasn't accepted, so it makes a lot of different reasons.

But they should add a way to show agreement or disapproval with sentences.

I'm pretty sure the male voice is saying AB not AD.

It sounded that way to me too! I listened to it 5 times and heard 'ab'.

I agree. Is ab incorrect?

I'm sorry I was unclear. It sounds like the speaker says "ab," as numerous others have noted. And I entered wrote ab in my answer, thinking it was incorrect, and it was accepted. So the question has a mistake.

Larariam is translated by duolingo as household shrine. Let's practice a little consistency, or are we wondering on what side of the bed you awoke today. You sometimes accept "you all," and sometimes you don't. Consistency, please.

we go to Duolingo to learn languages, and we often get bogged down in this sort of detail. Translating shouldn't be a matter of guesswork.

Yes I thought "ab" meant from and "ad" meant to.

I translated, "you walk into the lararium," and it was marked as incorrect. Would my sentence need a change of case, or is this just a missing translation?

"Ad" doesn't necessarily mean you went into the lararium; just "to" it. So you just have the wrong preposition.

Also, the way I understand it, Larariae weren't buildings or rooms but small box-like shrines, so you couldn't walk into one.

Unless you were a drunken parrot.

Why "you all" and not simply "you"? In Latin I'd say "omnes ambulatis" to translate "you all".

Just "you" also works. They accept "you all" to allow for emphasis on the plural

Don't translate "you all" in a literal translation,
it's only the only way to specify, in a sentence that you expect a plural you. It shouldn't be translated in Latin, as the plural you does exist, so no need to repeat it in Latin once you used the verb (or even the normal pronoun, without "omnes".

You walk wasn't okay, only you all walk?

But I see the topic "ad forum is". More correct and, so to tell, ancient version (I mean more popular among the ancient authors) is "in forum". The Romans didn't have any problems in seeing the difference between "in foro" and "in forum".

is "ambulatis" 2nd person plural? Shouldn't "you all walk to to the lararium" be accepted?

Yes, it is second person plural.

You have an extra 'to' there. Was this there when you checked your answer? I don't see why they wouldn't as long as you only had one 'to'.

lol thanks for catching the typo. I don't believe I had the extra "to" there. Thanks for the help.