"Perhaps the parrots can read."

Perhaps they can, when they're not hammered or raving.

Of course they can! 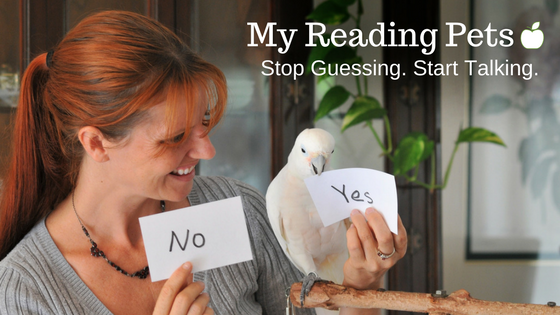 In reality, no. They only can recognize the shape of the word, not read. Reading is being able to read even a word you've never seen. It requires high abstraction skills.

Animals can count, can know the hours of the day, can learn the name of the colors, but as they are not able to deal with abstract concepts and symbols, or contextualise, they cannot use the systems made for the conceptualist human brain. Being able to know that a letter can make several sounds according to the context, is made for our brains, and it's already hard for us sometimes, when our brains are made for this...
We have a symbolic brain, they don't.

Be careful with this link, it seems a commercial site selling at a premium price methods. Seems to me like selling a dream, by not making the difference between reading and recognizing a shape. "Your animal can read" is both a lie an a commercial sollicitation.

Pierce_Neige, it was only a joke, and you needn't advise me to avoid the link. In my opinion you are being overly harsh and judgmental in saying that "your animal can read" is a "lie." I think people understand that recognizing the form of the word is not the same as being able to read everything. They will be happy when their pet can recognize a few written words.

What I vehemently disagree with you is your statement saying that animals can only imitate sounds without knowing they are meaningful. I owned a Blue-fronted Amazon parrot and he knew about two dozen words and phrases, their meaning, and naturally when to use them. A friend of mine bred parrots and she had a couple who had meaningful conversations between them. She would eves-drop on them from outside their room!

The following is copied from the Wikipedia article on talking birds:

"Alex", a grey parrot, had a vocabulary of about 100 words, substantially fewer than world record holders,[37] but he is perhaps the best known talking bird due to the publicity surrounding his potential cognitive abilities. In learning to speak, Alex showed scientist Irene Pepperberg that he understood categorization like "same and different" and "bigger and smaller". He could identify objects by their shape ("Three-corner", "Four-corner", up to "Six-corner") and material: when shown a pom-pom or a wooden block, he could answer "Wool" or "Wood" correctly, approximately 80% of the time. Alex could identify the difference between yellow and green same-sized objects by saying "Color" or identify a larger one by naming its color. If asked what the difference was between two identical blue keys, Alex learned to reply, "None" (he pronounced it "Nuh").[38][39][40] Alex died on September 6, 2007.[41]

"Prudle" held the Guinness World Record for many years as the bird with the largest vocabulary - a documented 800 words.[42]

"N'kisi", another grey parrot, is noted for his impressive English usage skills and other abilities. As of January 2004, he had a documented vocabulary of 950 words. N'kisi is believed to be one of the most advanced users of human language in the animal world.[43]

"Einstein" appeared on many television shows and became famous for her ability to recreate sounds as well as talking. Video clips show her making the sound of a laser beam generator and an evil-sounding laugh. She has been trained by Stephanie White.[44]

"Disco", a budgerigar,[45] was an internet sensation that had scored millions of views in its YouTube channel. One of his most famous phrases, was the impressively long: "What seems to be the problem officer? I am not a Crook, my name is Disco, I'm a Parakeet."[46] Disco passed away in January 2017.

Wow! You two ought to get a room!

Perhaps they are Chinese parrots. Or Ancient Egyptian... (no letters, just shapes)

Oh snap! Now they're gonna demand for rights and stuff.

Other alternatives such as 'forsit' and 'forsitan' should be accepted.

What is the difference between forte and fortasse?

Well if you couldn't read the two comments directly above your question, why don't you call your parrot? He can read them and explain it to you.

Sadly, I don't have a parrot. I've always wanted one, but I always seem to have cats.

I had a parrot once but he was always drunk. This course is bringing back those memories

Forte and fortasse both can be used!

No, "fortasse" is "maybe" and forte" is "by chance, by accident, casually, accidentally".

Sometimes, in some contexts, both words can be interchangeable, but only when "maybe" is "by chance". It's not always the case.

Here, in this sentence, it's not the case, as, if (the) parrots can read, it can't be due to the chance, an accident, or the roll of a dice.