The typo detection, where you get marked correct on a question although a typo is pointed out, seems too permissive.

For example, this only got flagged as a typo:
Multae feminae linguam latinam student.

Duolingo let me off with just a warning. But in fact my mistake of putting “-m” endings instead of “-ae” endings reflects a complete case error. (I forgot that ”studere” does not take the accusative for its object.). So I think my answer should have been marked wrong.

The sentence was about “your daughters...”, so my answer should have started:
“Filiae meae...”

Again, Duolingo marked my sentence correct and just warned me of a typo. But in fact, I had the number completely wrong: singular vs. plural. The other Duolingo languages I’ve met mark you wrong if you leave off the pluralizing marker at the end of a word. I think Duolingo should mark me wrong here too.

I don’t know if this is anything the team has control over, and I don’t know how common it is for Duolingo students to ask to be marked more strictly, but here it is: I’m asking if this can be tightened up, so fewer answers pass through as mere typos.

I find a similar problem with the German course. Sometimes when I get an ending wrong (eine v. einen) it will tell me I have a typo and give me the mark anyway. Other times it tells me I am wrong (as it should). Sometimes Duo decides I have a typo but I can't find where it is. Perhaps this can be looked at? (But Duo always nails me when I type "is" in place of "ist", a true careless typo).

In addition, If you could correct (or at least mark as "watch punctuation") whenever a noun is not capitalised. In German, that is a flat-out error.

We (contributors) can't do anything about the strictness of grading in the course, but I'll bring it up in case something can be done by staff. Thanks for expressing your concern!

Thank you ehartz. And let me say again how delighted I am with the course, and grateful to all the course contributors.

I mentioned below: it seems as if Duolingo doesn’t have a full enough dictionary of inflected forms to properly run what seems to be its algorithm in other courses: “if a mistyped word happens to form an actual word, mark it wrong.”

I remember at the beginning of some courses, they were quite lenient in calling some errors "typos." I was actually quite grateful for this! It did not hamper me from quickly learning the Real word, though.

If they would be marked wrong instead of typos, then I’d get a chance to practice answering it the right way later in the lesson. This is good pedagogically. It doesn’t imprint quite as well if I just look at the answer and think about it, without practicing actually doing it.

The typo-detecting engine doesn’t seem to be tuned or primed right for Latin. In most courses, if your mistyped answer is a real word, Duolingo marks you wrong. It seems like Duolingo doesn’t have a full enough dictionary of inflected Latin words to detect “misspelled” words that are actually real words.

I'm very happy with the typo-stuff, but indeed sometimes I was just wrong. As long as I can say to myself: 'No, this is not a typo, it's in incorrect answer' I think I'm doing fine.

I confirm that. I just answered "liber meum est magister meus" for "My book is my teacher." and got just "a typo" message, despite the fact that "liber" is masculine, not neuter, and it should be "liber meus". It has to be "answer invalid"! 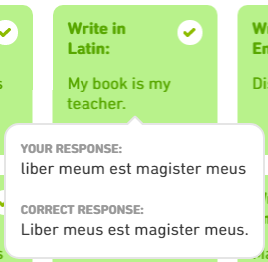