"The office has chairs."

According to Wiktionary, a "tablinum" is a study, or archives room in a Roman villa. It also can be a balcony, terrace, or picture gallery. I wonder if there is a word that corresponds more to a workplace outside of one's home?

As tablinum is the room where the patron receives the clients, it's the ideal word. The fact the word has several meanings seems to show that this room was used for several activities (receptioning important guests, working there as in a study, archiving important documents, esposing things that they want to show to important guests).

The first meaning is probably the room that is covered with wood panel, as it's the etymology of the word, and one of the meaning. (from tabula, not pictures as some dictionaries says, but wooden tablettes/boards) 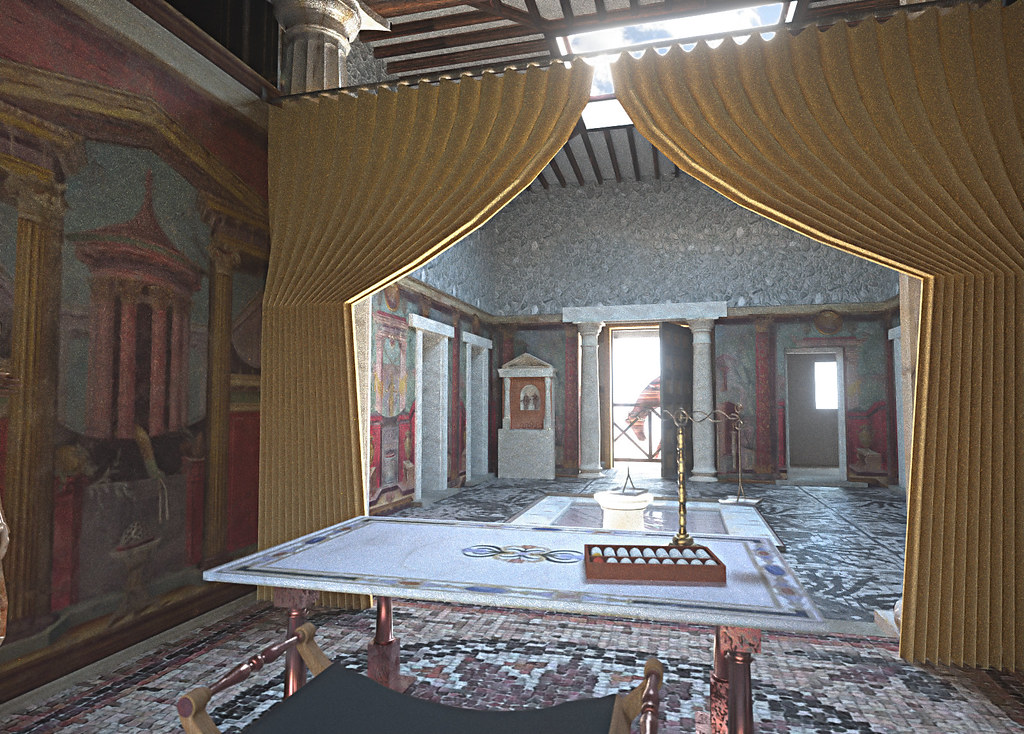 Linking the page, because it's copyrighted: Remus Frunza

See: several activities can be made in this large room. It also has a terrace, and we can see a part of the pictures gallery, so maybe some "tablinum" was only very small, and consisted only in a terrace, (but I believe they had the same function, receiving distinguished guests, because it would be the logical link between all those meanings).

As the word tablinum is from the wood "tabula", tabula being a cognate of "table, tablette" (tablette is a small table in French, where it comes from.), meaning everything that has a flat shape (like a table),
the tabula (=the flat thing) can be the wooden boards I mentioned earlier, or it can also mean paintings. In French, the word "tableau" (tableau is some kind of masculine for tablette, using a masculine diminutive.) is used to mean "painting", directly from this meaning of "something flat as a board". So, the other hypothesis is that there can be a "tablinum" for the desk covered orginally with wooder boards, and a "tablinum" because it's full of paintings, maybe two different rooms?

In Roman architecture, a tablinum (or tabulinum, from tabula, board, picture) was a room generally situated on one side of the atrium and opposite to the entrance; it opened in the rear on to the peristyle, with either a large window or only an anteroom or curtain. The walls were richly decorated with fresco pictures and busts of the family were arranged on pedestals on the two sides of the room.

The tablinum was the office in a Roman house, the father's centre for business, where he would receive his clients. It was originally the master bedroom, but later became the main office and reception room for the house master.
Source: wikipedia

Is "tablinum" accusative or nominative? I was expecting "tablino" to be the right answer here...

Here it is nominative (since the tablinum is 'doing' the having) . . .

but tablinum is also used as the accusative.

villa tablinum habet -> 'The villa has an office'

So I am still confused, if it is nominative why is tablino wrong?

tablino can be either dative or ablative, which both cannot be the subject, the doer of the 'having'.

got it thank you

Please help me! I'm really struggling with learning the grammar. Is it becuase the chairs are not having anything done to them that they are not "sellam"

No, the action is being done to the chairs, it is just that sellam is the singular accusative form, while sellas is the plural.

Tablinum sellam habet. -> The office has a chair.