Did something like "office" exist in Roman Empire? So that there is a word for it

"tablinum" was a room in a villa where wealthy people might do their "paper"work: things like business, management, administration, and keep records.

Indeed! And also to receive the clients

I believe it was given as a meaning inthe course notes.

I have usually seen this translated as "study."

"Study" would be a good translation to accept.

Yes, for Wiktionary, tablinum is:

-study, archives (room in a Roman villa)
- balcony, terrace
- picture gallery (think of the French "tableau" to mean a painting, tablinum is from tabula, same root than "tableau", and even "table", a flat thing, or board.)

So, it's a study, an office, a balcony, a picture gallery, or an archive room, but it's a also a place (any place?) covered with wooden boards. (probably all those definitions could be accepted, in some contexts, but the first meaning is "office".)

The tablinum room was first Etruscan, and later adopted by Romans.

In Roman architecture, a tablinum (or tabulinum, from tabula, board, picture) was a room generally situated on one side of the atrium and opposite to the entrance; it opened in the rear on to the peristyle, with either a large window or only an anteroom or curtain. The walls were richly decorated with fresco pictures, and busts of the family were arranged on pedestals on the two sides of the room.

The tablinum was the office in a Roman house, the father's centre for business, where he would receive his clients. It was originally the master bedroom, but later became the main office and reception room for the house master. 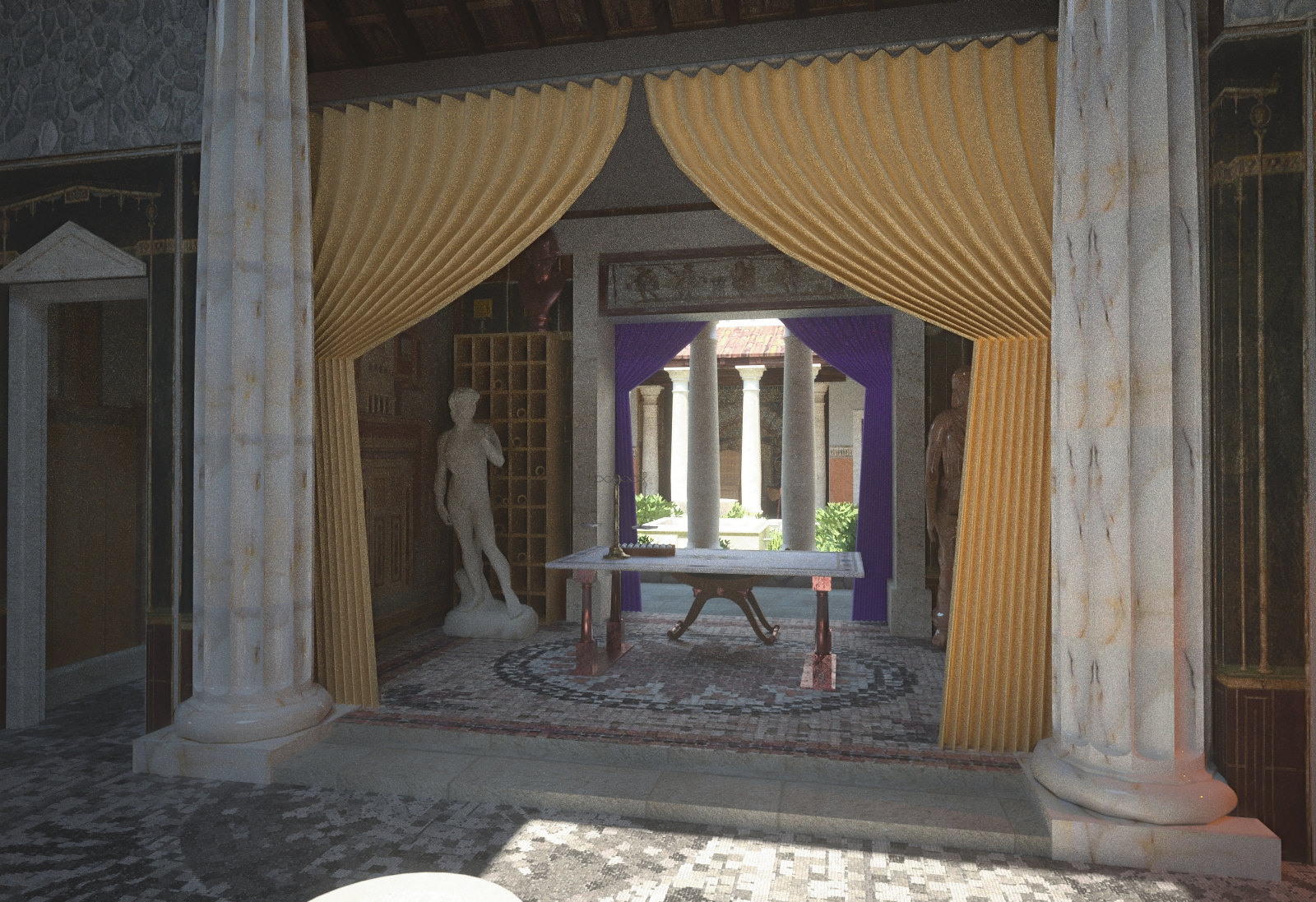 This is a Roman tablinum. (I wish they have illustrations for some sentences!)

Why not use officium?

In Latin, "officium" is used of a service or kind act and can also refer to official duties or appointed work. Rarely, it is the place where a magistrate works, but then is a public place, not a room in a house.

The Morgan-Owens Neo-Latin Lexicon (http://neolatinlexicon.org) has tractatorium' as first suggestion foroffice'. antother possibility would be [conclave] scriptorium', though that would more properly be a special area for writing within a larger building. Agreed thattablinum' is usally better translated as `study'

Why is "study" not accepted?

You mean study as in "studio"? (Sorry if the question seems weird, I made the mistake of learning latin in english when my main language is spanish. To late to go back now, haha)

"studium" is generally the eagerness with which one applies themselves to a task. I have never seen it used as a physical place in the Latin I have read, although Lewis & Short says it becomes a term for a place ("study," "school," etc) in later Latin.

Please, make sure you return the chairs once you're done with them!

"The office has chairs" means that there are chairs in the office, doesn't it?

Maybe, that is a much more likely sentence in English, but as of today (20 May'20) it is not accepted as correct. We have to report everything!