Darija (colloquial/everday language) of Arab states differs by a lot, I'm told. I am guessing that in saharan Africa they borrow heavily from Amazigh (aka Berber* - but they don't like this term) but what would the rest of the Darijas borrow from?

I am probably going to learn Levantine Arabic but how different is it from others? Arab speakers - what can you and can't you understand?

I am so so glad you posted this question! I get so frustrated when people learn westren/Maghrebi arabic and then try to converse with other native Arabic speakers from other countries. This frustrates me because I feel that they have limited themselves by learning one of these three dialect. These three dialects are not well understood by most people from the remaining 22 arab countries. Most people can't understand or speak the darijja dialect of these three countries because simple words like the word "two" for example is different in the Moroccan dialect/darijja than what is used in most arabic countries. Most arabic countries use the word ithnan or a derivative from modern standard arabic while in Moroccan Arabic the word two is jooj. Two absolutely different words for the word two! A Romanian man once tried to talk to me in Moroccan Arabic, I only understood him because I can speak the Moroccan dialect. On the other hand, my friend who is also a native arabic speaker (she doesn't speak the Moroccan dialect and has not been exposed to it) did not understand a single word he said.

I would recommend Egyptian Arabic honestly. It is cheaper to learn (many Egyptian Arabic teachers so there is a big competition=lower prices), more widely spoken, easily understood, and last Egypt produces an enormous number of movies and series and so you'll be able to practice your listening skills and build new vocabulary easily!

** Darijja is the Maghrebi word for lahja/dialect. Thus, not every arab person will understand what you mean by darijja use the word لهجة instead.

Thanks so much for the information! Levantine is cute, eh? Haha how so? That's cool. I didn't think about how popular Egyptian Arabic is for people learning it. I didn't know about the media and that's what I always look for. ^_^ So I'm still deciding between Egyptian and Levantine.

I find it cute because it sounds soft hahaha With that being said, this does not mean that Egyptian Arabic is not cute too! It is cute! Egypt mass produces media every year that appeal to every taste. Check the website italki, if you're interested in going beyond this platform and having an Arabic professional teacher/tutor.

I'm glad to hear that Levantine dialect is widely spoken (and that it is cute). I am learning MSA at the moment, but I am going to Beirut next spring and have enrolled on a two-week course in Levantine Arabic there.

Regarding the other name for Amizagh, you mean "Berber," not "Bedouin." As for the influences of other languages on colloquial forms of Arabic, review the map of the expansive Arab world (per the 22-state Arab League) to get an idea of them from all the surrounding areas.

Wikipedia, perhaps the world's foremost general reference work, lists the major dialects, with links to each one, the better to explain the differences: https://en.wikipedia.org/wiki/Arabic. Briefly, the three major forms named are Western/Maghrebi, Northern (including Levantine) and Peninsular/Arabian (broken down further by peninsular subregions into Hijazi, Nejdi, Khaleeji and Yemeni).

Of course, in appreciating Arabic in all its diversity, Quranic/Classical Arabic (the form from on high, if you will) should be considered alongside MSA and other dialects. 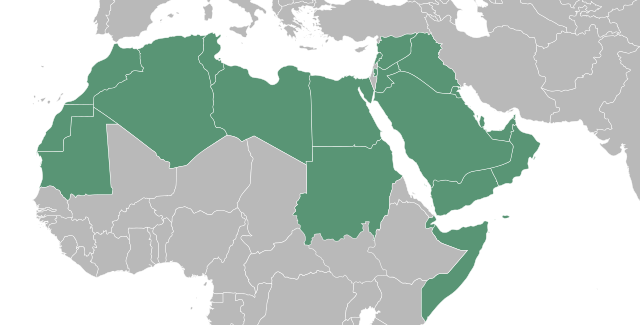 General influences on the East come from Turkish, Persian, English, French, and even Indian sometimes. There might be some minor influences from other languages but these are the major ones.
In the West (Maghrib region) the main influences come from French, Spanish, and of course, Amazight. Egyptian specifically has some influences surviving from Coptic (which in turn is a "granddaughter" of ancient Egyptian).