I know that streak posts are generally hated but...

Have you seen my streak? I waited for this day for a long time.

Edit: The time has come. The streak is no longer the glorious number of the beast. I used streak freeze once for it to last longer, yet it had to come to an end. 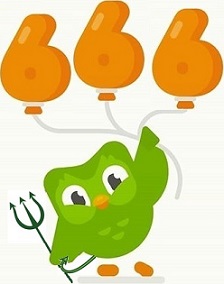 You have 69 likes Here take a lingot

if you're reading this, we need to vote it back

Your post earned it an up vote from me :-)

69 is another meaningful figure.

In 3 days you will reach greatness

That is great. a little pitchfork and everything! ;)

That's just how Duolingo is outside Duolingo.

Duo is just expressing how he is when you miss a lesson.

get to heaven :D This devilish owl is surprisingly pleasant to look at.

Nope. That comment's too one-sided.

(And I'll be very surprised if I'm the first to make that sort of reply to you).

Certainly not the first. In fact, it never ends.

I don't mind streak posts at all, it's very motivational to see others excited about their progress. I have to say, there's definitely some added glory to a big streak when you're at a number like this. I'd be tempted to freeze that streak every day loool

I must admit it is tempting to keep it for a few more days, but I doubt I will. Once you get to 666 you can keep it forever though ;)

Then you won't get to heaven! That's not a good idea. If I was you, I would wait until I had 777 streak and then keep it there.

not another crying duo :'(

Wdym? Keep what where?

Let's hope you continue to have internet access for the next few days. At least you don't seem to have Hexakosioihexekontahexaphobia. Best wishes for a longer streak! :)

This occasion needs to be screenshotted or it is lost forever!

Great job, gratz !!
Any special personal meaning for this number ? It certainly is original. Ahem. 0__0

It seems it’s not updated on the forums yet, my streak is 666, the devil’s number.

I waited for the devilish jokes I’m probably going to make.

Sorry, but I’m busy sacrificing my family to Duo the owl

Pleased to meet you. I think I can guess your name.

Oh wow Congrats though I thought my 2 day streak was wonderful until I saw this post :( (:D) congrats and enjoy the lingots.... and I do not hate streak posts they motivate me... I seriously have to try harder now... Congrats!

WOW THAT IS AN AWESOME STREAK!!!! I hope one day my streak will be that big!

Congratulations on a 666-day streak! For some reason, I can never get past 30 days!

183 for me today. half a year. amazed I've managed to stick with it this long.

There is one thing though... ...technically the ‘number of the beast’, as it is known, was originally considered to be 616. As far as I can remember, it is considered to be 666 now due to a mistranslation or something similar to that.

The beast is generally understood to be Nero Caesar, who was the first roman emperor to persecute Cristians.

This matter is disputed.

Congratulations on your
repidigital streak and may
you continue to earn many
more repdigits.

Great topic. Keep up the good work!
Thanks for posting.

By the way, why do you end your comments with בס״ד?

Let's remember to keep the post about the streak itself and not steer the discussion thread to off its topic.

A 665 day streak is absolutely something to be proud of! Excellent job! Keep it up!

I noticed that after I had posted. Lol. Too funny!

That streak number is the greatest ever
it is bea(ș)ting all the others!
I want the same now! I will sell my soul to get it
- Ooh! Damned! I already sold it long time ago...

so whats going on here? .

It has a bunch of copies of Unicode Character THAI CHARACTER MAITAIKHU (U+0E47), which is supposed to be rendered so that it goes on top of the character it follows. However, it appears that different Unicode text rendering engines have different ideas about what to do when you have multiple copies of this code point in a row, so rendering is not consistent. Some evidently stack the maitaikhu multiple times, resulting in those funny squiggly lines. Some don't.
⠀

The reverse angled horn is using Unicode Character THAI CHARACTER MAI THO (U+0E49) to create the same effect in a right leaning angle.

They still make for a fun and unique congratulation by Vu7xENbj

No idea, what the heck is this and how many satans can I conjure with it?

Поздравляю! But the ultimate achievement would be to reach this milestone in Danish on December 11 or June 11. https://en.wikipedia.org/wiki/Devil%27s_Birthday

Do you think I am that evil?

Of course not! Ducks are inherently saintly. Nor are the Devil's Birthdays inherently evil. These are just (as a Danish friend told me) the two traditional dates that some rents are due in Denmark.

Congrats. I love this streak thing but it's important to not take it super seriously. In my opinion, it helps you to stay motivated and make practicing and language learning a habit. It becomes the part of your life. It doesn't matter if you practice 10 minutes or 10 hours a day (it's up to you), the point is to not give up and also enjoy what you do.

how the devil did you manage a streak that long?

That is a long time!

are you the streak beast?

YOU certainly have a beastly streak!

Your streak is heavenly, sir. You're a day after 777. So close to greatness.

I had responded to someone else's post yesterday (at 777) but it got deleted along with the main thread. I had mentioned the tradition of the "Schappsnummer", where all the numbers are the same.

Here's looking forward to 1111, a mark that a few, including Hannibal, on this discussion thread have already reached. You and I, Ducky, have something to strive for. Let's hope our zeal in learning does not blind us to that little milestone.

That's an interesting word, Schappsnummer. I shall strive for it too, as well as to 1337.

YOU RUINED IT!! ITS NOW 672 DAYS THE DEVIL WILL SURE COME FOR YOU NOW YOU MUST RUN AND HIDE BEFORE IT'S TO LATE!!!!

If I survive until 777, I might reach salvation and live.

This is one of my fears as well.

Maybe I should start Hebrew on Duolingo and aim for 777 although I already speak it. After 777 I will start Korean and aim for 1337.

As in "Sympathy For The Devil" ? UhHuh !
A rolling stone gathers no moss.
My personal favorite is "Beast of Burden", but that was about 10 years later. :)

nice the highest streak i've ever got was around 200.

let's give this guy equal amount of likes, then let's find a Latin speaker and perform a chant to summon a language demon

Fortunately you can learn Latin on Duolingo for free!

Streak posts aren't hated by me. I'm just at 77, but it's getting bigger by the day. Congrats!

If someones gives you any more lingots and ruins this perfect 666 they really are worse than the devil.

Thanks! LOL (: Very true. Nobody give me lingots!!! Just gave you lingots until I had 666.

Nice streak dude. Too bad about the lunatics.

I gave you two because I have too many

The one with the 1-day streak was really fun and upvoted too.

OMG, I think I'll stop and start my streak all over again just for the joy!

lol I love it

Keep it that way forever by freezing your streak!

I already froze it one day, but it will probably become 667 today.

Good job for the hard work!

chills up and down spine

lmao now I have to keep going

Congrats!! I actually do not mind streak posts as long as they aren't done every single day by the same user (i.e. posting when they get a new streak every day 1, 2, 3, 4, etc etc). Good luck in your languages, Japanese is great and while I don't have any desire to learn Russian, I think it's cool you are learning two script languages at once!! Even I want to learn 5 script languages (Javanese, Sundanese, Tamil, Japanese, and Sundanese) but can't find the time to do them all at once let alone every starting them (I started Javanese and Japanese a bit but quit for a while).

great moose milks how do u do it!!!

That's cool - congratulations! [I wish the streak tracking was accurate for everyone]